MACHA Productions uses theatre to challenge social structures that oppress people.  The first part of Body Politics is No Motive, inspired by the Daphne du Maurier thriller of the same name.  The piece follows private investigator Rachel McDoo as she tries to work out why a woman who ‘had it all’ went into her husband’s study and shot herself with his gun.  This is followed by Sweeties, a dark comedy looking at the relationship between sisters Tracy and Jen as a twist of fate from one sister’s past blows their lives wide open.

Reflecting the company’s desire to make theatre with voices and communities absent from the cultural landscape, both No Motive and Sweeties are partly inspired by true life testimonies.

“In an ideal world, we wouldn’t have to make a piece such as Body Politics today.  But it isn’t an ideal world, so we do.  On a daily basis so many women both here and around the world are being stalked, harassed, objectified, shamed, overlooked in the workplace, denied their bodily autonomy, trapped in caring roles or dangerous and loveless relationships and are not being allowed to live their lives to their full potential.

Over the past three months over thirty women from all over Belfast have shared insights and hard won knowledge and their truths are reflected within the content and direction of both No Motive and Sweeties.  With both International Women’s Day and Mother’s Day taking place soon, Body Politics could not be more topical or more timely.” 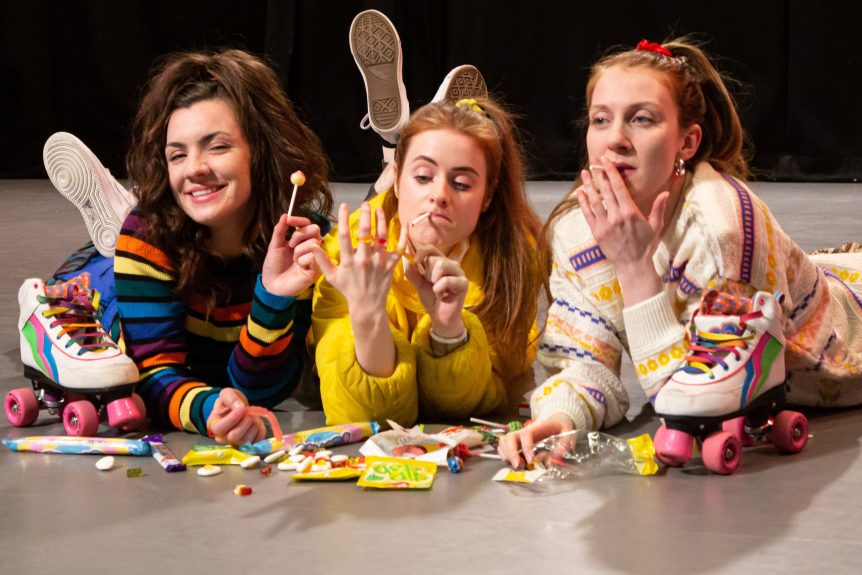 Body Politics will be part of the IMAGINE! Belfast Festival of Ideas and Politics programme and each performance will be followed by a post-show debate, exploring the issues raised by the production.  An exhibition of writing, film and visual art created by workshop participants is being curated by Therese Kieran and will also run in parallel with Body Politics in the gallery on the first floor of The MAC.

Written and directed by Jo Egan, Body Politics stars Emer McDaid (Game of Thrones), Louise Parker (Frankenstein Chronicles) and Sarah Reid (Two Fingers Up), with movement direction by Eileen McClory from Off the Rails, fresh from her sell-out success with Brink from Maiden Voyage Dance.

“MACHA Productions is one of our most dynamic and daring theatre companies, harnessing the power of theatre to embody and represent the marginalised and to give voice to their stories.

With Body Politics MACHA is tackling one of the most pernicious, insidious issues at work in our society. With the pressure of social and mainstream media shaping women’s sense of self and others’ sense of what it is to be a woman this is timely and crucial intervention in the discourse.

MACHA has put together a phenomenal team of female talent, with the fearless creativity of Jo Egan, and the intelligent, sensitive performances by Louise Parker, Emer MacDaid and Sarah Reid, as well as the powerful, uncompromising movement direction of Eileen McClory. This is a brave show that should be seen by all. The Arts Council wishes the whole team well with the production and we would encourage everyone to go along and see the show.’”

MACHA Productions  is supported by The National Lottery through the Arts Council of Northern Ireland. Supported by Belfast City Council.