The exhibition is the culmination of a nine-month project, reflecting on the centenary of the partition of Ireland and the border. Over 20 artists from across the island of Ireland came together, to participate in a creative programme of presentations, discussions, visits and workshops, to inform their creative response.

The exhibition had been scheduled to be shown in galleries on both sides of the border in April and May of this year. However, when the Coronavirus crisis struck and ‘lockdown’ was announced all the artists’ work had to be shelved, with no knowing when the exhibitions would be rescheduled.

But, though the Saldanha Gallery at Fort Dunree (which had been due to exhibit “” in April), has had to be closed, Donegal based Arts organisation Artlinkhave managed to ‘open’ a virtual replica, The VSG, in its place. 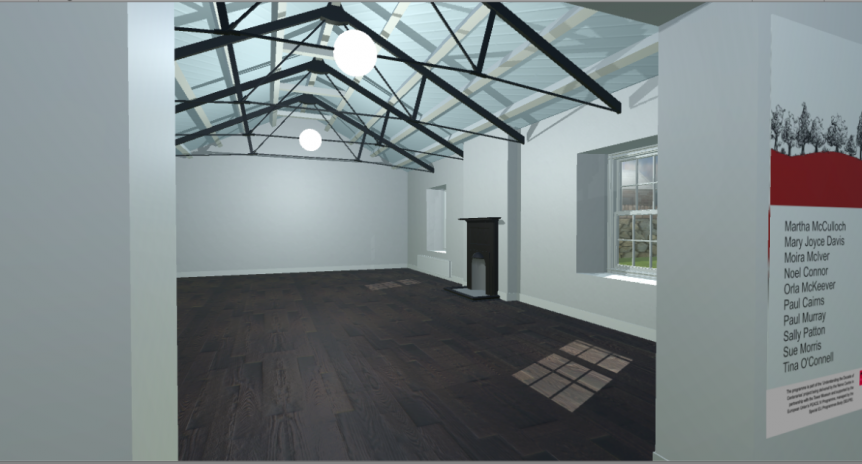 The creation of this digital 3D space means that the artworks can now be installed in a virtual environment, accessible online to a global audience.

The work on view is the artists’ response to the theme of ‘borders’, expressed in film, painting, print, sculpture, installation, photography, performance and text.

Anyone will be able to ‘visit’ the ‘Drawn From Borders’ exhibition at any time after the launch on the 21st May, by logging on to www.artlinkonline.ie and using a computer mouse to navigate the virtual gallery.

Funded and supported by the European Union’s Peace IV Programme, ‘Drawn From Borders’ was delivered byArtlinkFort Dunreein association with The Nerve Centre and Tower Museum, Derry~Londonderry.