That was the song played by Newry Accolade Ukulele group last week, bringing to a conclusion another enjoyable year’s learning and performing. Following the relaxation of the rules on small groups meeting, everyone was delighted to be able to meet outdoors. It was a very special occasion, hosted by our musical directors Vessie and Nikolay Ivanova in their garden. The brilliant sunshine and party atmosphere made it all the more memorable. Despite having to be socially distant, there was a feeling of hope that a kind of normality was returning after the months of lockdown. 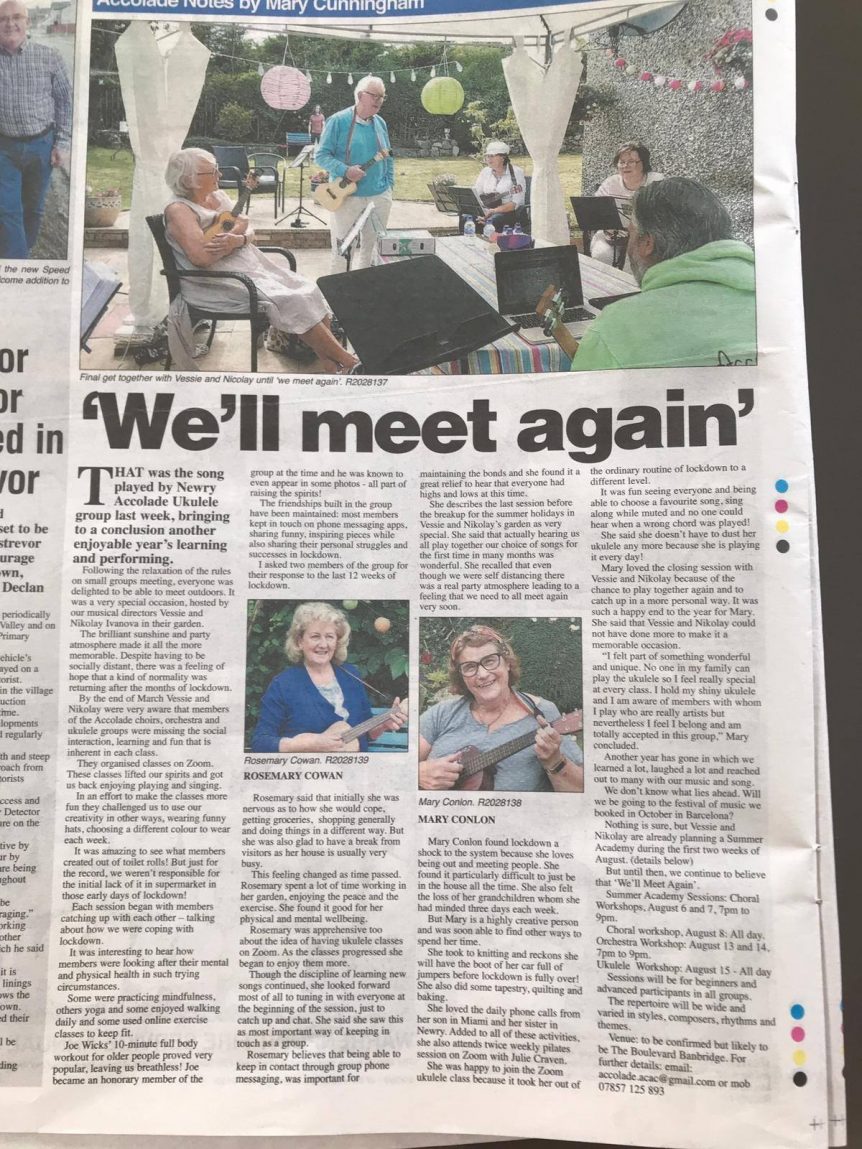 By the end of March Vessie and Nikolay were very aware that members of the Accolade choirs, orchestra and ukulele groups were missing the social interaction, learning and fun that is inherent in each class. They organised classes on Zoom. These classes lifted our spirits and got us back enjoying playing and singing. In an effort to make the classes more fun they challenged us to use our creativity in other ways, wearing funny hats, choosing  a different colour to  wear each week. It was amazing to see what members created out of toilet rolls! But just for the record, we weren’t responsible for the initial lack of it in supermarket in those early days of lockdown!

Each session began with members catching up with each other – talking about how we were coping with lockdown. It was interesting to hear how members were looking after their mental and physical health in such trying circumstances. Some were practicing mindfulness, others yoga and some enjoyed walking daily and some used online exercise classes to keep fit.  Joe Wicks’ 10 minute full body workout for older people proved very popular, leaving us breathless! Joe became an honorary member of the group at the time and he was known to even appear in some photos –  all part of raising the spirits!

The friendships built in the group have been maintained: most members kept in touch on phone messaging apps,  sharing funny, inspiring pieces while also sharing their personal struggles and successes in lockdown.

I asked two members of the group for their response to the last 12 weeks of lockdown. 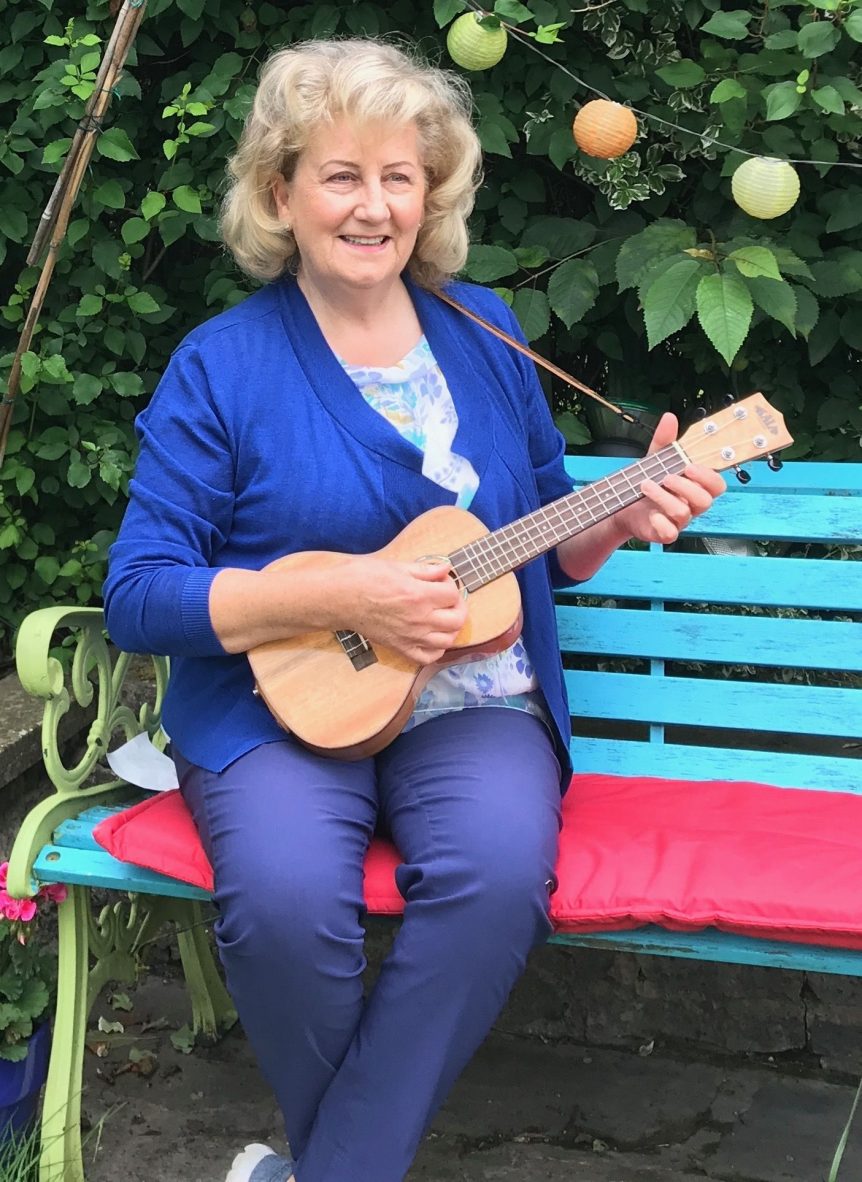 Rosemary said that initially she was nervous as to how she would cope, getting groceries,  shopping generally and doing things in a different way. But she was also glad to have a break from visitors as her house is usually very busy. This feeling changed as time passed. Rosemary spent a lot of time working in her garden, enjoying the peace and the exercise. She found it good for her physical and mental wellbeing.

Rosemary was apprehensive too about the idea of having ukulele classes on Zoom. As the classes progressed she began to enjoy them more. Though the discipline of learning new songs continued, she looked forward most of all to tuning in with everyone at the beginning of the session, just to catch up and chat. She said she saw this as most important way of keeping in touch as a group.

Rosemary believes that being able to keep in contact through group phone messaging, was important for maintaining the bonds and she found it a great relief to hear that everyone had highs and lows at this time.

She describes the last session before the breakup for the summer holidays in Vessie and Nikolay’s garden as very special. She said that actually hearing us all play together our choice of songs for the first time in many months was wonderful. She recalled that even though we were self distancing there was a real party atmosphere leading to a feeling that we need to all meet again very soon. 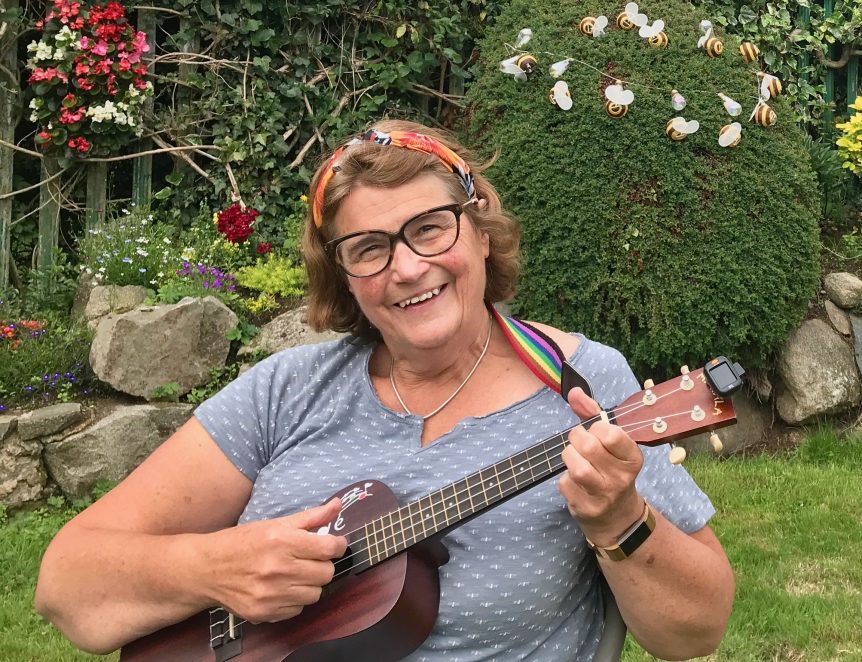 Mary Conlon found lockdown a shock to the system because she loves being out and meeting people. She found it particularly difficult to just be in the house all the time. She also felt the loss of her grandchildren whom she had minded three days each week.

But Mary is a highly creative person and was soon able to find other ways to spend her time. She took to knitting and reckons she will have the boot of her car full of jumpers before lockdown is fully over!  She also did some tapestry, quilting and baking. She loved the daily phone calls from her son in Miami and her sister in Newry. Added to all of these activities, she also attends twice weekly pilates session on Zoom with Julie Craven.

She was happy to join the Zoom ukulele class because it took her out of the ordinary routine of lockdown to a different level. It was fun seeing everyone and being able to choose a favourite song, sing along while muted and no one could hear when a wrong chord was played! She said she doesn’t have to dust her ukulele any more because she is playing it every day!

Mary loved the closing session with Vessie and Nikolay because of the chance to play together again and to catch up in a more personal way. It was such a happy end to the year for Mary. She said that Vessie and Nikolay could not have done more to make it a memorable occasion.

“I felt part of something wonderful and unique. No one in my family can play the ukulele so I feel really special at every class. I hold my shiny ukulele and I am aware of members with whom I play who are really artists but nevertheless I feel I belong and am totally accepted in this group.” Mary concluded.

Another year has gone in which we learned a lot, laughed a lot and reached out to many with our music and song. We don’t know what lies ahead. Will we be going to the festival of music we booked in October in Barcelona? Nothing is sure, but Vessie and Nikolay are already planning a Summer Academy during the first two weeks of August. (details below)

But until then, we continue to believe that “We’ll Meet Again” 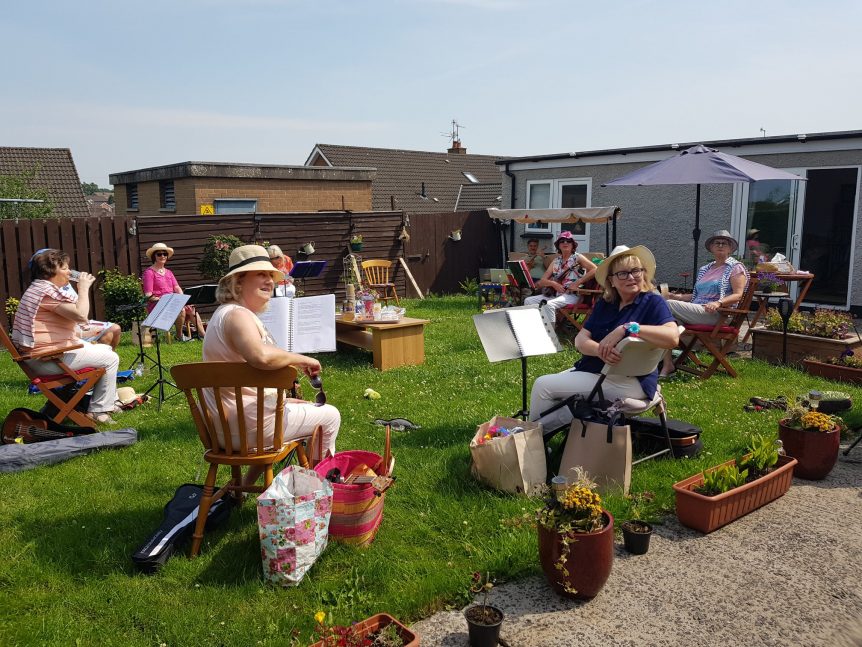 Sessions will be for beginners and advanced participants in all groups. The repertoire will be wide and varied in styles, composers, rhythms and themes.

Venue : to be confirmed but likely to be The Boulevard Banbridge. For further details: email: accolade.acac@gmail.com or mob 07857125893