Belfast Film Festival and Docs Ireland will both take place this November after being postponed earlier in the year. 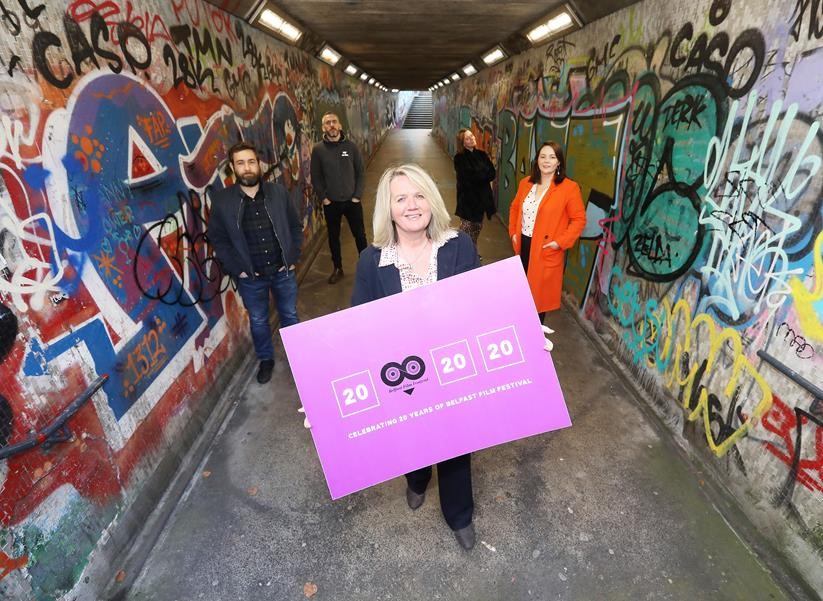 The two festivals will run across the month of November and will unveil a series of premieres including the world premiere of a new documentary, Martin McGuinness: I Fought, I made Peace, I made Politics, and the second feature film from the talented team behind Bad Day for the Cut.

The 20TH Belfast Film Festival will include premiere Wildfire, the accomplished debut film of Cathy Brady, an emotionally stirring tale of two sisters struggling to emerge from a traumatic past, starring the late Nika McGuigan.

The team behind ‘Bad Day for the Cut’ will also return with their second feature film, Boys from County Hell.  This raucous crowd-pleaser packed with sharp humour, lovable characters, and bloody special effects, is one of best horror-comedies of recent years.

For those who want to enjoy the festival from the comfort of their own homes, there is a wider range of online events including interviews with John Lloyd, best known for his work on comedy television programmes Not the Nine O’Clock News, Spitting Image, The Hitchhiker’s Guide to the Galaxy, Blackadder and QI. Director Edgar Wright, known for his work on TV show Spaced, and films Hot Fuzz and Shaun of the Dead, will also talk with Mark Cousins about his cinematic inspirations.

“In March we were poised for delivery of the festival, but this new Covid-19 world halted us in our tracks. It is no exaggeration to say we are thrilled to be able to now deliver both festivals in November. We hope to captivate audiences once again, in person and online, with a month of exciting guests, some of the best of new Irish film, and a few wee surprises.

“Belfast Film Festival has been running for twenty years and it is a cornerstone of the city’s arts calendar. Our ability to cultivate a local film industry is something we will continue to nurture for future generations of filmmaking talent.

“This is also the second year of our documentary festival Docs Ireland and it’s fair to say that the documentaries we will show this year are some of the best and most provocative I have seen. The international appetite for feature length documentary films is huge, and we on this small island have much to offer. The second Docs Ireland will be slightly different, but there is no doubt it will stimulate debate and discussion on a broad range of issues.

“We are mindful that whilst this year’s festivals will go ahead, they will do so in very particular circumstances. The health and safety of our audience is paramount and we have in place a number of safety measures to ensure that everyone stays safe. These include online booking and cashless systems, temperature checks and sanitisers at all venues and greatly reduced numbers inside movie theatres to enable social distancing. Those attending our events must also wear face masks. We would ask that anyone who plans to attend any of our ‘in person’ events’ is patient with staff and respectful of these measures, which are there to ensure everyone can enjoy the experience safely.”

The second annual DOCS IRELAND festival will focus on this year’s illuminating Irish documentary films and will open with The 8th, an inspiring and moving film tracing Ireland’s campaign to remove the 8th Amendment – a constitutional ban on abortion.

Award-winning Director Alison Millar will also host an online work-in-progress event with clips and insights into her brand-new film chronicling the influential life of the murdered journalist Lyra McKee.

“Can we wind the clock back, please, to when we could just show up at a cinema, or pile into a pub? To a time before the news cycle was as addictive as sugar?

“No. But we can remember what nourished us and got people through previous emergencies: Stories, culture, invention.

“In 2020 our programming team has tried to find stories, culture and invention. Last year the Belfast Film Festival had one of its biggest events – The Aamir Khan masterclass at the Waterfront – and we launched Docs Ireland which, in year one, captured a great moment in non-fiction film.

“We wanted to build on these, but then our building fell down. And so, we’ve been rebuilding. Belfast people are good at rebuilding. So, if you live in Belfast or further afield, let us entertain you in days like these. We’ve got films that are fun in themselves, or which give some perspective on us, or what’s happening.”

The festival will take place at a number of venues including the Odeon, QFT, Moviehouse, Black Box and Strand Arts Centre.

Programme and ticket information on both festivals can be found at belfastfilmfestival.org

All Belfast Film Festival and Docs Ireland ‘in person’ events will be strictly managed and will take place in line with the latest Covid-19 public health guidance and restrictions. This will include the requirements for online bookings, limits on numbers at events to ensure social distancing is enforced, as well as the use of face masks, temperature checks and hand sanitiser at all locations. The festival organisers request that anyone attending planned events strictly follow and respect all of these measures.