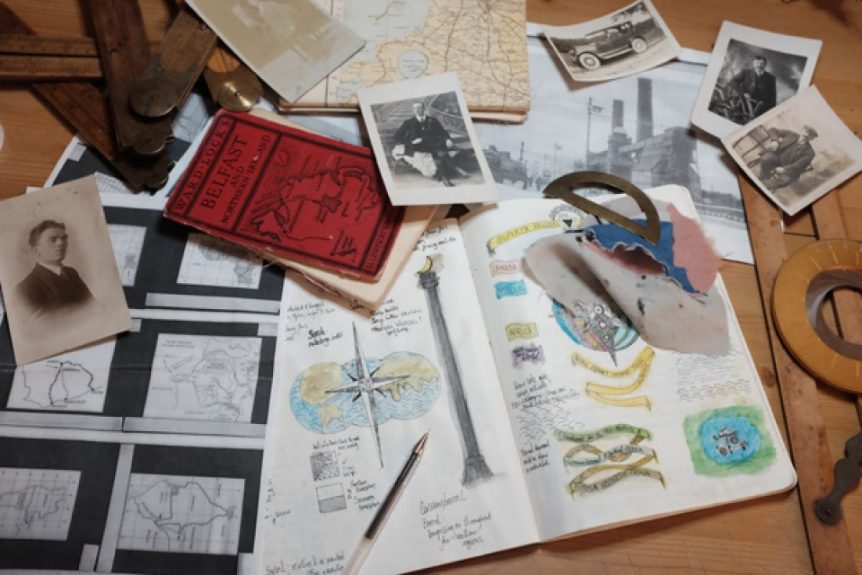 In October, the artist John Baucher started to install his project, initially with confidence, but increasingly anxious this project might not be open to the public at all. Now we know, that we have to delay the opening again for nearly a further 2 weeks.

Our daily experience that life is in limbo, that plans for holidays, meetings, activities are gone, pickled and preserved for future dates, are hitting the arts like everything else. Does this change the art? Does it change the way we see art?

No doubt, the turn to Zoom-alongs and online presentations of art has most of us glued in front of the screen with some fallouts along the way, of fatigue and the desire of physical experience. Like the trigger for this project, which was inspired by a charity shop find of a tourist souvenir album of postcards and pressed flowers entitled ‘Flowers from the Holy Land’, dated 23/12/26.

John Baucher is referencing this album depicting city views of Jerusalem combined with specimens of flowers. City views contrasted or complimented with flora, the urban side by side with nature. Yet the original book, displayed in the installation, also reveals the underlying ideology of its time: that of Imperialism.

Belfast and East Belfast, where the artist lives and works, was once a power house in the economic success with its shipbuilding and rope works. Baucher sees the yellow cranes every day from his studio building, and he quotes their structure using wooden imperial measurement rulers. They become key objects and playful metaphors in this project, together with locally collected dried flowers, preserved between glass.

Over the past 3 years Baucher has documented flowers growing in the cracks of overlooked urban spaces in his neighbourhood. For the artist, they signify resilience and the circle of life and despite being sprayed annually with pesticides, they still persist.

Flowers from the East celebrates in a tender and playful way the harsh industrial heritage of Ballymacarrett, East Belfast: a tribute to Baucher’s neighbourhood and a challenge for its future.

In the meantime you can watch a documentation of the project here.

PS² is supported by The National Lottery through the Arts Council of Northern Ireland.