Love, loss and living are just some of the powerful themes explored in ‘Before You Go’, a new play from Kabosh which will be filmed and streamed online from 2 – 4 March.

Written by Laurence McKeown (‘Green & Blue’) and directed by Paula McFetridge, ‘Before You Go’ looks at the difficulties of communicating with those who are closest to us and the consequences of not saying what we should while there is still time.

Set in Carlingford in the present day, ‘Before You Go’ tells the story of 22 year-old Sorcha, whose mother, Mary, died when she was just 18 months old. Sorcha was raised largely by Mary’s parents and whilst father and daughter now have a strong relationship, his regular absenteeism throughout her life was never discussed. As the sun rises on the border, the clock is ticking and the past needs to be addressed…

Playwright Laurence McKeown found that the experience of Sorcha and Brendan in the play had a resonance with his own family:

“I have two daughters who are around the same age as Sorcha so I understand the need for intrafamily and cross-generational dialogue. Everyone has a past and I believe that the only way we ever move forward, whether as a family, a relationship, or as a society, is by people being prepared to speak openly about their past and others being prepared to listen.

Memory is, by its very nature, subjective and we may never know the full truth about the past. We have to come to accept that. Only then will we be able to live in the moment, while letting the past exist.”

The cast of ‘Before You Go’ features James Doran as Brendan, Lisa Duffy as Mary and Eimear Fearon, in her first professional role, as Sorcha. 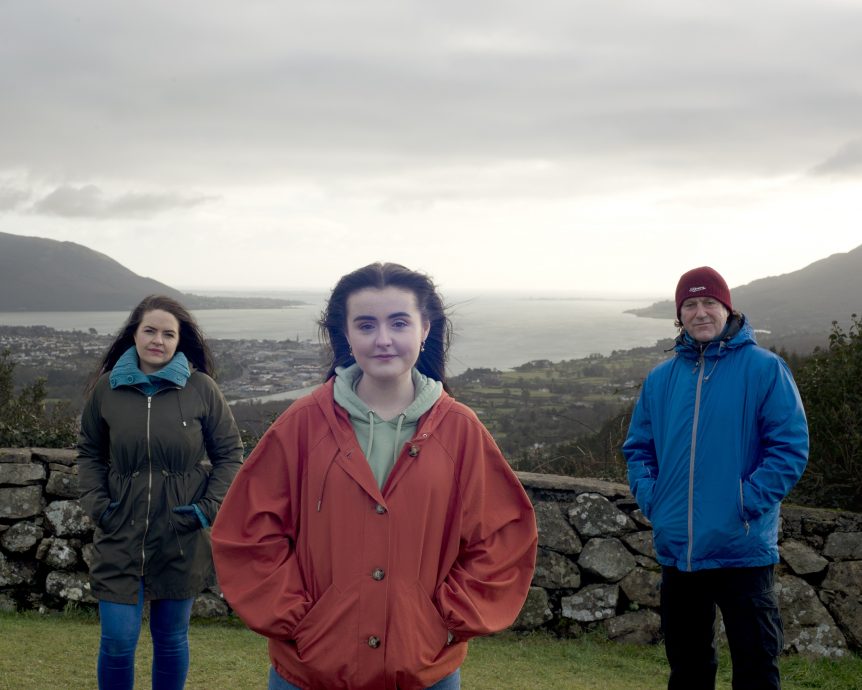 (L-R) Lisa Duffy, Eimear Fearon & James Doran, the cast of ‘Before You Go’

Director Paula McFetridge from Kabosh explains some of the creative challenges of presenting ‘Before You Go’ during the pandemic:

“We presented the first socially distanced live theatre show in August last year and while that had its own challenges, they do say that necessity is the mother of invention! The more recent COVID-19 regulations have meant that with ‘Before You Go’ we have had to rehearse via Zoom, perform in a ventilated studio in the middle of winter and film the show remotely with only the three actors in the room. Despite the restrictions, the power of Laurence’s words and our cast’s performances remains in full force.”

The show will be filmed in the style of a ‘Play For Today’ at Havelock House and free live online viewings will take place on the following dates:

‘Before You Go’ is suitable for ages 14 and over and lasts for 1 hour.

Tickets are free and can be booked now via www.kabosh.net or by searching ‘Before You Go’ on www.eventbrite.co.uk

‘Before You Go’ is part of From Oriel to Brexit, a cross-border, cross-community arts project which is funded through the EU’s PEACE IV Programme, managed by the Special EU Programmes Body. Match funding is also supplied by the Executive Office and the Department of Rural and Community Development. Kabosh also acknowledges the support of Louth County Council.

Kabosh is funded by the Arts Council of Northern Ireland and Belfast City Council.

For further information on Kabosh and its work, visit www.kabosh.net

‘From Oriel to Brexit’

‘Before You Go’ is part of ‘From Oriel to Brexit’, a cross-border, cross-community arts project which incorporates music, theatre, creative writing and photography. The project is funded by the PEACE IV Programme.

The aim of the project is to facilitate participants to share their personal and communal histories within the context of topical contemporary issues. ‘From Oriel to Brexit’ also aims to enlighten and deepen our understanding of, not only the history of others, but also of our own past and of the lives we lead today.