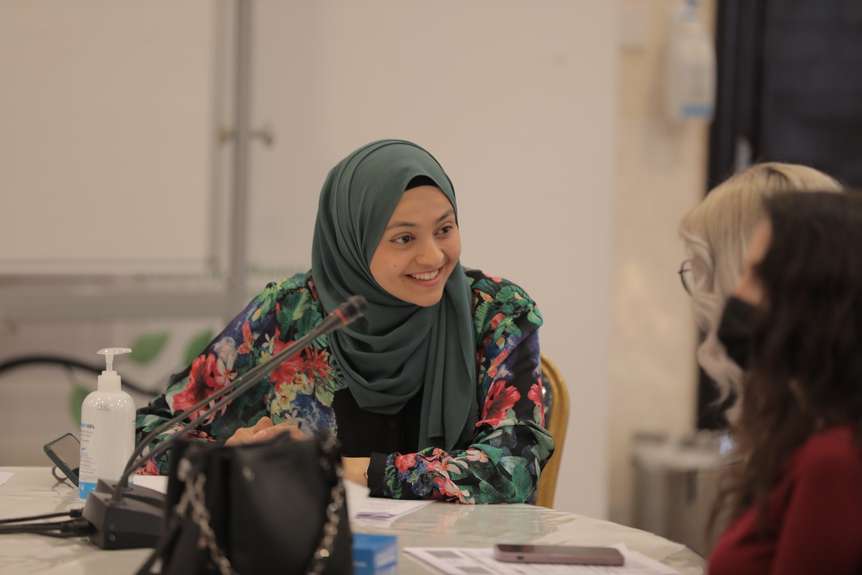 Cinemagic Film Festival is delivering a ground-breaking programme from over 13th- 14th May in Amman, Jordan in partnership with Generations For Peace, founded by HRH Prince Feisal Al Hussein of Jordan. The programme supported by the Irish Department of Foreign Affairs and Irish Embassy Jordan has been running over the last two months with online film masterclasses delivered by Cinemagic for young people in Amman who have been collaborating to raise awareness of issues they are passionate about. The culmination of this stage of the project is a Short Film Academy with 20 Jordanian and Syrian youth including Palestinian and Syrian refugees.

The Cinemagic industry film masterclasses featured a selection of pre-recorded masterclasses which were interpreted by a translator followed by a Q&A. The film ‘Abia’ and behind the scenes documentary being produced by Cinemagic as part of the Short Film Academy will be shot in Arabic, with the team working closely with translatorS and the crew have all been secured from Jordan under the Cinemagic’s directing team and Cinemagic CEO, Joan Burney Keatings MBE.

The programme, which was launched in January 2022, invited a group of Jordanian youth and Syrian refugees to gain theoretical and practical knowledge in filmmaking, scriptwriting, location scouting, and directing. The training aimed to hone the participants’ skills in various areas of filmmaking to enhance their potential pathways to employment in Jordan’s growing film industry and encourage participants to work together as a team to produce their own independent film. The participants joined the Cinemagic masterclasses presented by international production managers, screenwriters, and award-winning filmmakers, including screenwriter and filmmaker Ryan Rowe. His produced film credits range from the indie cult comedy Tapeheads to Charlie’s Angels. Screenwriter, Director and Playwright Maire Campbell. Her Original feature films as a screenwriter include A Christmas Star and Grace and Goliath. Assistant Director Terry Bamber has worked with the legendary Micky Moore. His film credits include the James Bond 007 film series. Producer-Director Sam Nutt is also leading the crew in Jordan. The broadcast shows he has worked on include Britain’s Got Talent, MTV Music Specials, and the BBC Radio1 Teen Awards.

During her visit, HRH Princess Rym Ali, Commissioner at the Royal Film Commission Jordan, said, “We thank all the organizers of this program, who have provided the opportunity for young, promising filmmakers to transform their creative ideas into a film that coveys their voice and their story to the world. Our support for this program affirms our mission to amplify the local film culture and industry, to use it as a tool for spreading awareness about pressing issues and to contribute to making Jordan a global center for audio-visual production.”

Dr Vincent O’Neill, Irish Ambassador to Jordan added “Our Embassy is delighted to support this really important initiative which uses the medium of film-making as a means of supporting peace-building initiatives in Jordan. What is distinctive about the initiative is that it draws on the experiences Cinemagic and the charity’s film professionals in Northern Ireland who are involved in conflict prevention and who are exchanging experiences with young people in Jordan who are similarly committed to peace and security activities in their communities here in Amman. I’m delighted also that the programme is overseen by two fantastic organizations Cinemagic in Ireland and Generations for Peace in Jordan.”

Cinemagic CEO, Joan Burney Keatings MBE said “The goal was to work with the Jordanian and Syrian young people, aged 18-25, from concept to final delivery of the film, to teach the young people new skills which we hope will empower them both in practical film making ability and in confidence. We really hope the project will build relationships between young people from different communities as they learn from each other and collaborate on a film which they are passionate about. The commitment from the young people has been incredible and we have had invaluable support from Generations for Peace, our key delivery partners. Cinemagic is proud to continually strengthen our work in Northern Ireland and Ireland and collaborate with key partners at home as well as USA and the Middle East to deliver the strategic growth of the organisation.”

Dr Muhanned Arabiat, President of Generations for Peace, added “We are proud to have hosted these advanced training sessions in filmmaking, which provided the opportunity for youth interested in this field to participate in training sessions presented by a distinguished international team of experts, and to produce an independent film that reflects their life experiences and hopes for a peaceful, secure and prosperous future. We believe that young people play a vital role in driving social change. In our time, filmmaking is considered one of the most effective means to support and enhance this role.”

The story of the movie “Abia” tackles the issue of refugees and societal violence, selected by the 20 young male and female participants. The film will be screened in the coming months in Jordan, Ireland, and internationally, and across social media channels to engage young people and allow them to exchange discussions and opinions on important social issues.