It has been a very busy year for the popular Trash Fashion project with workshops continuing to take place in the lead up to the exciting Fashion show next month.  Here is a look at the last twelve months of the programme.

Rewind to early 2012 and the CAP artists were working with Blackie River Community Group, The Centre (Cregagh), Divis Community Centre, Morton Community Centre and St Andrews 168th Guides. For the first time the project worked with groups outside Belfast. 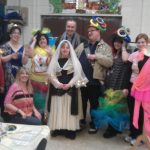 The Greenlight Gateway group in Ballycastle were inspired by the 2012 Olympics and created some fantastic Olympic themed outfits. Ballycastle was also on the Olympic Torch relay route so the theme was particularly significant to the town. The participants later showcased their outfits in style at their fashion show held at the opening of the Space2grow development by UTV’s Paul Clarke. 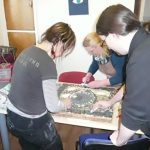 After a hectic term, the hard work and effort came to a major climax with the highlight of the programme; the Trash Fashion Show! The Kings Hall Conference Centre hosted the event and participating groups made the journey on a spectacularly sunny Saturday in May. The audience were wowed by a wave of colour from all the participants’ creative outfits.

CAP were also delighted to be joined by Brid Hefferon Artist in Residence at Cuig Studios  who was invited to  exhibit her fashion inspired artwork. Cúig – Creativity Unlimited an Integrated group of five artists in residence at Mayfield Arts Centre, Newbury House. 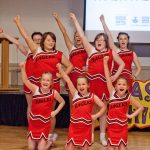 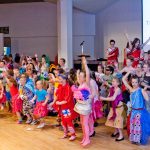 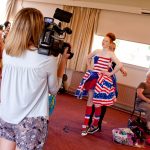 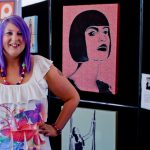 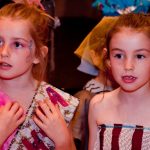 In August Trash Fashion took a trip to the second Newcastle Arts Festival. The festival has already built up a reputation and hosted a number of workshops over the weekend. The Annesley hall was the venue for the fantastic Alice In Wonderland tea party where Trash Fashion facilitated a drop in costume workshop to the delight of everyone involved.

The highlight of September was Culture Night and Trash Fashion did not disappoint. This year for the first time CAP were involved with a new initiative, Culture Night in the Community and included a week of workshops open to the public and for community groups in the run up to the main event.

Artists from Community Arts Partnership and community groups from all around Belfast assembled the beautiful 12 ft dress, ‘Betty Bustle’. 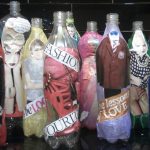 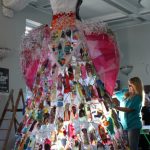 The Dress was constructed using willow, chicken wire and a few secret ingredients! The skirt  was decorated throughout the week at community workshops with a range of recycled items including plastic bottles kindly supplied by Play Resource and magazines donated by Northern Woman Magazine keeping the subject local! Each Bottle was individually designed by all the participants, who added their own creative style to  the dress. The bodice was created using up-cycled materials from various household objects so everyone had fun discovering what other items lurked beneath the bustle!

September also marked the start of a new term for all the new groups involved in the Trash Fashion programme. Seven new groups commenced their workshops with a range of new exciting themes and ideas and have been showing a great deal of enthusiasm. Throughout this month many of the groups will showcase their work so we will update you accordingly.

Below are some behind the scenes images of work in progress! 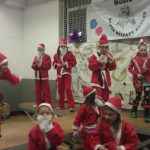 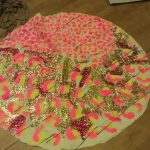 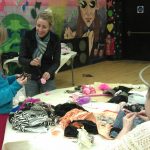 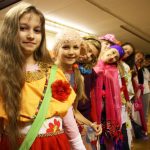 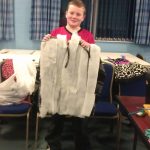