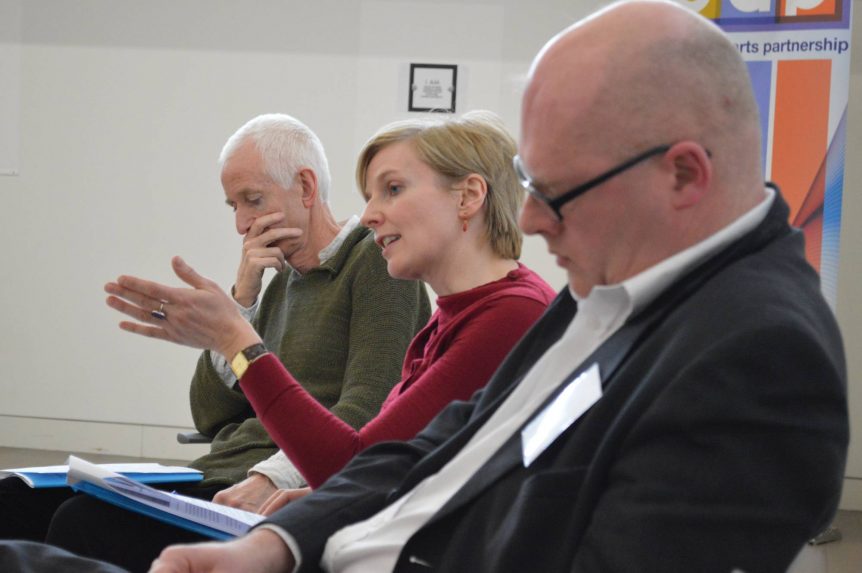 Robbie McVeigh commented, having attended 2 days of the conference and associated events:

The PICAS ‘Making It’ conference offered an important space to engage with questions of intercultural theory and practice. The term interculturalism remains contested and controversial. But if it means anything beyond the now routine political caricature that ‘multiculturalism has failed’, it implies three key elements: ‘recognising the value of diversity’, increasing ‘interaction, mixing and hybridisation’ and ‘addressing conflict’. There is a further crucial dynamic – interculturalism can’t simply be the practice of BME people. This approach feeds the racist implication that only BME people ‘need’ interculturalism. In other words the normalised absent – white people, ethnic majorities, ‘host communities’ – should be as much the subjects and agents of interculturalism as BME people.

Moreover, while the notion of interculturalism has a useful, theoretical application, it often appears that people carry on doing the same things they did under the banner of multiculturalism or other community relations models. In this sense the key element in interculturalism is the question of what a given society is becoming rather than where its constituent parts have come from. As the PICAS approach suggests, interculturalism doesn’t happen by accident and is unlikely to develop organically – in other words for it to work it has to be framed theoretically, it has to be facilitated actively and it has to be resourced practically. Contact between groups isn’t enough – there needs to a clear and strategic approach to why and how this leads to the outcomes envisaged in intercultural objectives. If some of the practice is to transcend the traditional multicultural caricature of ‘steel drums’ and ‘saris’, Northern Ireland has to simultaneously move beyond ‘marching bands’ and ‘Irish dancing’. Our community art practice has to both interrogate and reflect a society in which none of these elements is static and each is interacting in a complex synergy.

As was evidenced in the work of the ‘Making It’ conference, PICAS offers a very different approach. It is grounded in reflexive practice. Across a whole range of very different art forms and very different practice, it has helped generate a range of genuinely innovative work. Given the relatively small sums involved, it has turned a laudable if unfocussed funding label into an innovative and paradigm-setting practice. This achieves two key outcomes. First the groups are facilitated to new intercultural practice – they have celebrated diversity and increasing hybridity and addressed conflict. Second, this has not been achieved at the cost of quality of art practice.

From this perspective the PICAS programme offers an important model – both within Northern Ireland and beyond. In the Northern Ireland context – in a polity with profound division and conflict around racism and sectarianism – it offers an approach which addresses the dynamic between the three key ethnic blocs – Protestant and Catholic as well as the disparate BME communities. Beyond this it offers a model of good practice to other contexts engaging with the intercultural paradigm. European policy development encourages intercultural engagement for an increasingly wide constituency and this would be rewarded by close attention to the lessons of PICAS. Moreover, if there’s one part of Europe that needs to address and transcend the fetishisation of single identity ‘culture’, it is Northern Ireland. The PICAS programme shows how this can be done in positive and radically innovative ways – with art practice that is both interculturally and aesthetically ground-breaking.