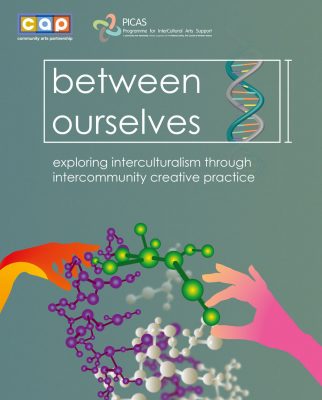 In the local vernacular, when you begin a sentence here with “between ourselves”, you are usually invited to share privileged information, some news that not everyone knows, in a hushed aside. In contrast, in looking at how to open the spaces between communities and traditions, ethnicities and cultures, Between Ourselves is designed to share some of our recent experiences and more mature expertise, and include new creative possibility in the conversation.

We have attempted in this book to offer an exploration of a particular place, at a particular time, within a particular context. Northern Ireland, in the second decade of the 21st century, struggles to emerge from a highly contested cultural past, into a more plural, shared and welcoming civic future. Political changes, shifting identities and rapidly increasing cultural diversity in the region, have altered the landscape of community. Between Ourselves is an invitation to explore some of that terrain, in new, creative and collaborative ways.
It is written at a time full of opportunity and indeed necessity.

This book is offered as a touchstone of a group of experiences, insights and connections related to the Community Arts Partnership’s PICAS programme. This whole support programme has been funded by the Arts Council of Northern Ireland, whose role has been more than offering and awarding grant aid: also realising and investing in a strategy to see intercultural arts flourish here.

Some theorists may hold that culture is a way of organising our adaptive strategies, within our given parameters of place and technology. This somewhat anthropological interpretation might be seen as ultimately our power to transform ourselves that has given our species the evolutionary edge over the millennia. Looked at this way, culture, as an active, dynamic, emergent space where a multitude of determining factors correlate into an set of actions or relations, offering new ways of seeing or being, responds rapidly to the immediacy and interaction of people and places. Creating the emergence of that more harmonious and including cultural space is a fundamental human challenge, framed in Article 27 of the United Nations (UN) Declaration of Human Rights and which underpins social and civic activism and the work of community arts organisations the world over.

Against a backdrop of global determinations to reinforce the right to participate in the cultural life of a community and ensure that cultural diversity is recognised, resourced and maintained, we see the pragmatic, creative and timely exploration of intercultural arts as a tangible, effective driver of positive change.

Offering narratives about the way we live and recognise cultural value may generate insight into what it is to take part in cross-cultural activity at this time. If it is that we experience difficulty in participating within some collective or defined space, those who narrate most often are offered not only the best chance to influence that space, but start indeed to define the space in so doing. The ontological relational interaction between the act of relating and making things
relative affords the space between – and perhaps, as in the title, between ourselves.

To purchase a copy of “Between Ourselves – exploring interculturalism through intercommunity creative practice” email Gordon Hewitt, Information and Policy Manager, at gordon@capartscentre.com.