In the autumn of 2015 CAP put out a call for submissions on the theme of “Connections”. The response was overwhelming. 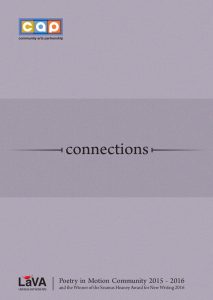 From there, a shortlist was chosen and the shortlisted poems were subsequently presented to a wider panel including poets Moyra Donaldson and Deirdre Cartmill and the CEO of Community Arts Partnership, Conor Shields.

During the launch on Sunday 13th March, special guest, local poet, Frank Ormsby announced who were the winners for this year’s Seamus Heaney Award for New Writing.