Home » The Monthly » Under Milk Wood for Millenials: a review of Kate Tempest’s Belfast performance by Chelley McLear 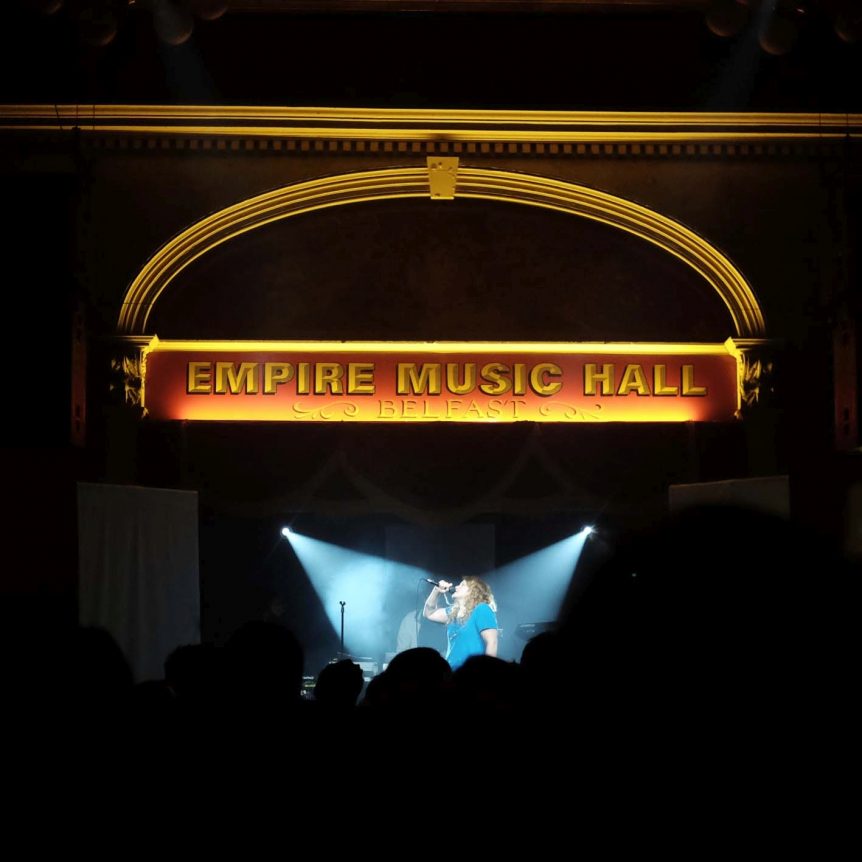 This is not your average audience for a hip-hop gig on a Wednesday night.  In front of me, a well-dressed gentleman tops off his ensemble with a fishing hat.  He is possibly in his seventies, he clutches his pint and gazes intently at the stage waiting for the headline act to appear.

And when she does, there is a roar; a crescendo of unlikely co-habitees for the evening.  The young woman in a blue t-shirt and grey trousers doesn’t look much like a pop star or a poet, but the audience is delighted and shows it.

Kate Tempest is not an out-of-the-mould anything.  Just when her audience thought she had cast herself as poet, she began to make music; when they thought she was a musician, she wrote a novel.  And she intertwines all of these skills in this modern tale set to music.

‘we are just sparks… part of a bigger constellation’

‘Let Them Eat Chaos’ is an album presented live here from start to finish without breaks.  It is a theatrical shamanic experience, weaving stories and rhymes and music and lighting and Tempest’s now instantly recognisable voice, sometimes chanting, sometimes running away from itself, sometimes running head on into the audience.

This is one story which is also the story of seven characters at the same point in time, divided only by doors and walls.  Different lives, co-existing but rarely intersecting.

Whatever the expectations, they are shattered. There is poetry, but mostly a rhyming prose.  There is hip-hop but hooked onto Shakespearean references.  There is a story but it is carried between beats and lights and ambient sounds.  This is an holistic experience. To fully appreciate the hour of words, it is necessary to surrender to whatever might be.  The abstract phrases of politics and song jar provocatively alongside concrete poetic images.

There are clichés; some pieces are better written than others.  This is not a masterpiece from beginning to end but it is a piece of mastery. It is impossible to deny the craft of form that the music necessitates.

Tempest combines her understanding of the classics, of story-arcs, of rhyme and rhythm, of contemporary hip-hop and rap, of politics and popular culture and seamlessly integrates each element into a piece of musical theatre, narrative and song, which satisfies an audience of baseball caps and brogues.

If Dylan Thomas were a thirty year old woman living in East London, this is what ‘Under Milk Wood’ might have been.  Even the narrative style of Tempest is reminiscent of the rhythm of Thomas at times. This is an acute, astute observation of life in a moment. Our moment. This moment is not pretty.  But it is not beyond rescue.  Tempest’s final call is to “wake up and love more”.

The audience moves in sync to the beats and to the words and to each other. The gentleman in the fishing hat is bobbing up and down in time to the bass line.

This is not just a gig, it is a rally: a call to love.  A call to be human. And when the humans leave, they are buzzing; buoyed on words and music and beats.

All too often great experiences are overshadowed by expectation; a need to evaluate one thing in terms of another.

If you see or hear ‘Let Them Eat Chaos’, do so on its own terms.  It is unlikely to fit the box you want to put it in.  It doesn’t need to.