Considering the breadth and reach of the Out to Lunch festival programme, it’s not entirely surprising to find that the Black Box is more or less at capacity for this matinee performance by the Orchestre des Refugies et Amis.

The modus operandi of the collective is to break perceptions about what it means to be a refugee or asylum seeker, and further still, to reframe the conventions of a traditional orchestral setup in a transparent and welcoming fashion. By doing so, theirs is a pursuit in opening up a new form of dialogue through an even newer class of musical identity.

The project is as well-steeped in the courageous intercultural aims of its project parents as it is in the cultural traditions, and the difficulties, of its contributors; we’re disappointed to learn that a musician set to play today is currently fighting his case for refugee status in London, but warmed at the prospect of the performance as a chance to challenge some barriers.

The music on offer today isn’t entirely fresh out of the box. Keyboards, as versatile as this band’s lineup, provide waves for which opening (and closing) track ‘A Dream within a Dream’ rolls upon. It’s reminiscent of the trip-hop explosion of the early 90s, with its rhythmic pulse and scooped-percussive thumps, but it’s firmly rooted in Edgar Allan Poe’s poem – making for an intriguing retelling.

The reinterpretation and subsequent end-product of each musician’s contribution is, however, and as proceedings kick off to an atmospheric start, it’s clear that this mash-up of ideas, both political and harmonic, will positively reflect enough of its intrinsic aim to keep our collective ears well perked.

Bookends aside, the set is one of fusion, energy, and occasional changes in tempo and time-signature that allow enough relief for the audience to engage with some truly powerful vocal performances; of Amin, a Sudanese pop-singer who is routinely given enough room for his eccentric, yet beautiful voice to reverberate around the Black Box. Southern Indian singer Amita is equally formidable at the microphone, propelling rapturous storytelling in the most emotive of ways.

At times cinematic, it’s in the scaled back moments that the Orchestre fare best; there’s a distinct cacophonous element at play on occasion when too many styles are thrown into the pot, but it’s quickly dispelled when the backing band fall comfortably back to convention to transition deeper into the performance.

That being said, Joby Fox’s rendition of Dylan’s ‘All Along The Watchtower’, while passable, somewhat breaks the pace given today’s wider celebration of world-imbued musical themes.

There’s no denying that the musicians each have a grasp on their instruments, and it’s compelling to experience this fluid entity – this transforming roster of professional and hobbyist musicians striving to carve out an inclusive space, both socially and musically.

It’s a feat which feels like both a necessary and admirable proclivity when the events of the past two weeks (referring to Donald Trump’s inauguration and subsequent Presidential Executive Orders – Ed) are considered, and while the performance itself is short and sweet, it provided enough impetus to engage the music fans in the room and, hopefully, open a few minds as well. 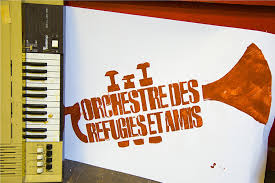 Aaron Drain is on the Editorial Board of Community Arts Partnership’s online magazine, the Monthly and is Editor of State Magazine. – You can find State Magazine at the following link – state.ie