I had no idea what to expect walking into this show. I hadn’t heard of Zoe Lyons; I don’t own a television so I couldn’t have accessed her performances through that medium, but reading the notes in the Out to Lunch booklet she seemed interesting. A gay comedienne covered in tattoos, talking about being isolated at school; I was looking forward to seeing what lay ahead for the evening’s entertainment.

Looking around me, the crowd, probably 80% women, and a big range in age, from 18 to over 60, was certainly different to what I’m used to at events I attend; often 98% big men in studded jackets – I see lots of punk bands in case you’re wondering.

Lyons bounces on the stage, commenting immediately on the weather, ‘Northern Ireland is some sort of magical land where it’s just always raining’. Her fifth time in the North, she’s no stranger to Ireland, whipping out an Irish passport explaining that her father was Irish and she grew up down south; brought up by nuns. The nuns, she says, were obsessed with talking about Hell, but Zoe grew up in a house without central heating. For her, Hell held no fear, “Heaven shmeaven, Hell.. Hellooooo!! 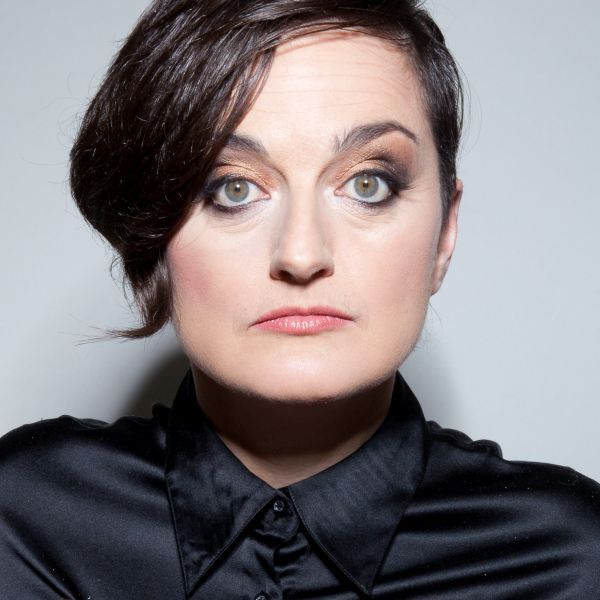 She covered her early years, stress-related alopecia at age 10, knowing already that she was gay, never fitting into any groups at school (not that she wanted to anyway); a misfit. Lyons is in constant motion; dancing, squatting, posing and jumping, utilising a range of voices and accents. The performance is as much physical as aural.  There is audience interaction built around people’s ages and the little bottles of wine they have on their tables. She ruminates about the utility of boxes of wine, especially at funerals; astride the imaginary cask, she pours a glass, pontificating… “he was a lovely man…”.

Donald Trump, described as a “badly done taxidermy of an orang-utan with the hands of a squirrel and the face of a duck” opens a topical section targeting, Theresa May, Arlene Foster and RHI, marriage equality laws in N.I, religion and homophobia.  From there, an interesting digression towards teaching her Dad how to use an iPad. If you want to discuss a vision of Hell, she refers back to the discussion about being brought up by Nuns, then she says, this comes close.

A section about her and her Dutch wife watching a show about people in vegetative states precedes material about vegans and vegetarians. This section seemed weaker than the preceding material, the “bit” about vegetarians appearing ill-considered and not particularly amusing.

A piece about being called ‘Smadam’ when in Egypt, because Egyptians found it difficult to distinguish her gender, morphed into a rallying cry, “Save the Smadam!!” during the sinking of the Titanic.

Much of what I heard is available on YouTube pre-show and post show searching revealed, which suggests that for any comedian, it’s hard work to keep shows fresh and dynamic. There were moments where the material seemed edgy and the delivery sharp, and others where the material seemed threadbare and tired. I departed not wholly enthralled but not entirely dissatisfied either.

This event took place at the Black Box theatre on Thursday 19th January as part of the Out to Lunch Festival.

J’aime Rachelle is a Belfast based musician and writer.