Lemn Sissay is a symbol in Ethiopia of ‘the boy returning home’. His Ethiopian roots are the source of a fascinating and somewhat disturbing story about how he came to realise he was fostered, his subsequent search for his real family, and the cultural and tribal issues which have prevented any real closure for him.

This sense of ‘not belonging’, appears to run through much of his work, all of which, for this performance, was taken from his ‘New and Selected’ collection ‘Gold from the Stone’, and the Black Box was full of eager fans at 2pm on a Sunday afternoon to see a poet who fuses ‘spoken word’ with ‘page poetry’, sprinkling in a sampling of comedy. 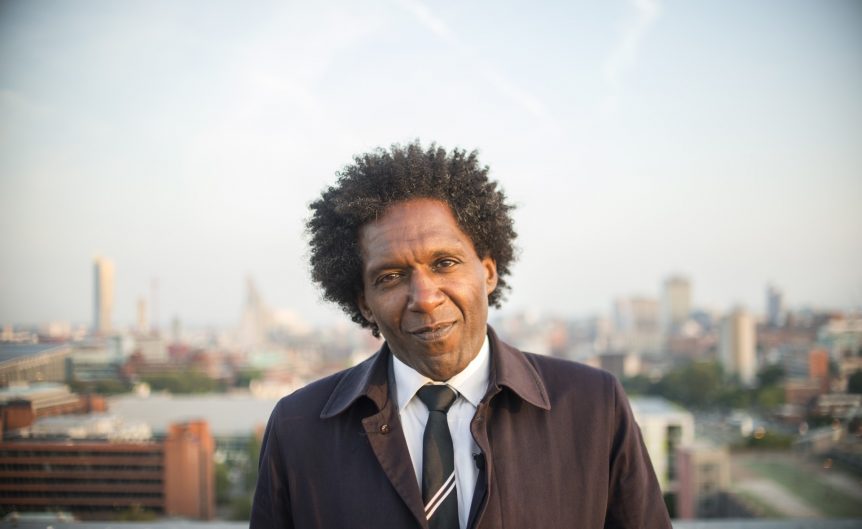 He began his set with the three page poem, ‘Mourning Breaks’, fluffing the first few lines and starting again: ‘They always said I was over the edge/ And now I am. I really am over the edge!”, staring wild-eyed into the audience. ‘But as I dropped, in a gasp of air, I grasped a branch/ That, I had hoped, had its roots in the rock or rock solid roots’.

The theme of ‘roots’ recurs frequently throughout the reading, which feels at times like a group therapy session, as Sissay relays aspects of his ‘rootless’ life.

The strong opening poem is lengthy, and perhaps makes its point a page before the end. The next poem Sissay claims is a favourite at weddings. ‘Invisible Kisses’ a poem which echoed, unfortunately, the inside of a Hallmark card.

Sissay’s work is strongest when he is addressing racial issues and dealing with his feelings of bitterness regarding the family he ‘lost’. ‘Suitcases and Muddy Parks’ is a high point: ‘You say I am a lying child./ I say I’m not./ You say there you go again.’

As interesting as the back-story is, and as adept as Sissay is at delivering it with the skill and precision of a well-honed topical comedian, the reading suffered somewhat by the lengthy story-led monologues between poems.
At one point I counted 15 minutes between one piece and the next. The reading lasted for almost two hours, which was about an hour too long; my ability to concentrate and focus began to flag and waver well before the end.

Sissay is an entertaining and deep-thinking poet. He exudes wit and charm and had the crowd on tenterhooks with sharp observations, well-crafted poetry and the incorporation of physicality with humour to emphasise particular phrases. He used vocal intonation throughout to great effect.

I’d read “Gold from the Stone”, before I attended the event so although ‘spoken word’ is his forte, his poems also read fairly well on the page, lending his work an extra dimension.

This show found Sissay getting a weight off his chest; the heartbreak as he struggled to deal with his family issues. The central message, “Having no family has truly helped me to understand ‘family’. Value yours.”

Overall, I left with the sense of having witnessed an accomplished performance poet deliver a reading that will be remembered fondly by a Belfast crowd that flocked to hear him.