Mike Garry moves a heavy wooden pulpit off stage in order to allow himself room to move around, and to be fully seen. The Green Room is full at 11:30am on a Sunday morning.

A former librarian, Garry does a lot of work with young offenders in prisons around the UK, helping them to discover a more articulate way to communicate their feelings and to be understood, (and to understand), and the passion he has for words and communication via poetic expression is clear.

He has toured extensively with the Salford ‘punk poet’, John Cooper Clarke; it appears clear that he has absorbed some of Cooper Clarke’s style, as he launches into his first poem, ‘Spring Crossings’, he sings the first verse: ‘People smugglers cram open boats/ With the loneliest of souls’. The theme of empathy for humanity runs through the work that follows. 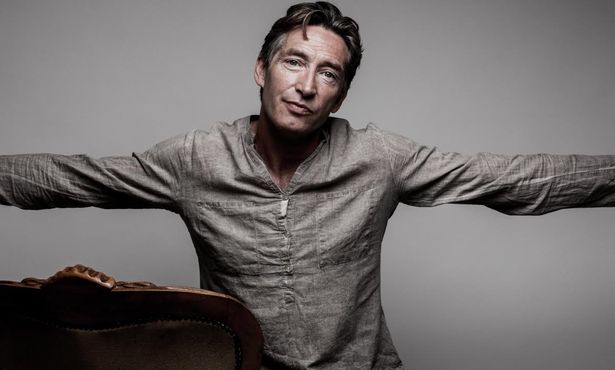 Garry is chatty with the audience, and interacts frequently, so the room begins to feel less like a spoken word performance and more like a living room, everyone paying attention to the life and soul standing in front of the fireplace.

Reading mainly from his latest collection, ‘Men’s Mournings’, his Mancunian drawl sounds like a cross between Liam Gallagher and the aforementioned Cooper Clarke, and this lends his words weight as he rolls the sentences out from his throat, pointing and interacting with the crowd as he jumps seamlessly from poem to improvisation, back to poem, keeping the audience on their toes.

I am struck by his utterly successful employment of whispering for emphasis, a technique I have rarely come across to any great effect.

Reading Garry’s work on the page can leave the reader a little cold, the social commentary and working-class hardships perhaps sounding rather too familiar, having been put into words by so many poets and writers before him.  However, once one has seen Garry in action, one cannot read his words thereafter without hearing his voice in the mind’s ear.

In this respect Garry’s poetry benefits greatly from being performed by him.  In the hands of a lesser performance poet the material might fall flat, but not so this morning.  The audience are enthralled, and even my own reservations about ‘spoken word’ poetry are put to the test.

Garry’s approach to his work is summed up, and perhaps cements the Belfast crowd’s endearment to him, when he invokes the late Seamus Heaney: ‘I find I see myself when I write/ Like Seamus said.’

This event took place in ‘The Green Room’, Black Box, Belfast, 22/01/17 as part of the Out to Lunch Festival