Over The Hill Music Collective is always keen to go and see older musicians perform.

The organisation was set up 6 years ago, to support, encourage and facilitate opportunities for older musicians which we felt the music industry had little time for. Over the Hill also aims to build the confidence levels of our members so seeing groups containing older musicians playing with commitment, passion and energy can be extremely useful. It can show our members that age should not be a consideration regarding the possibility of seeing quality performances from musicians or artists.

The Dodge Brothers certainly fit into Over the Hill’s age profile, a group of men, mostly in their 50’s, playing music which, in this case, isn’t necessarily connected to what is popular or current. As a former lead guitarist in a band drawing from a similar source, Skiffle, Rockabilly, and Americana, to that of the Dodge Brothers, they would have piqued my interest regardless, so I went along intrigued to see what they had to offer. 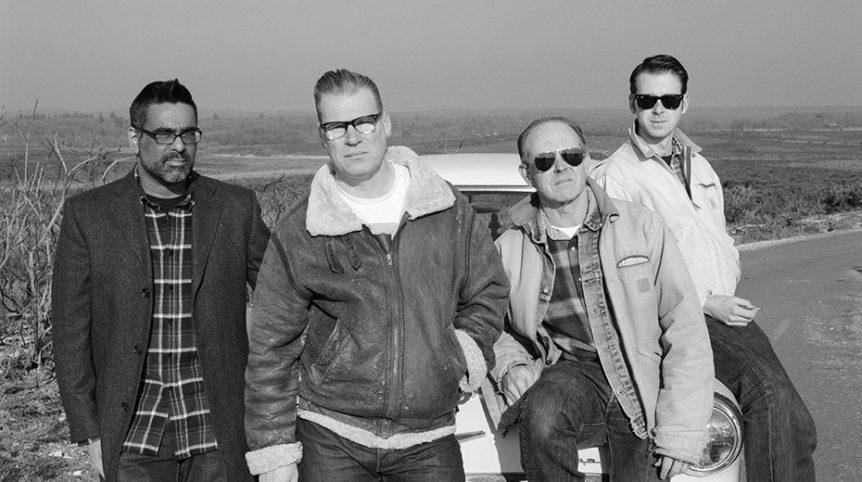 There has been a fair bit of positive noise about the Out to Lunch Festival this year, and a full house for a Saturday afternoon gig showed that the programmers had some fingers on the right pulse, as many people wanted to see this band.

I’ll note here that the support band, Tony Villiers and the Villains were very impressive and clearly The Dodge Brothers Mark Kermode thought so too; he clapped approvingly after each song as he stood at the back of the room. He commented jokingly later on that he’d hoped that the support band would not be that good!

Skiffle and Rockabilly can appear as a relatively easy genres of music to master; simplicity of chords and chord structures, relatively straightforward lyrical orientations and the notion that when played, the music should sound raw, lead you away from what ironically are pretty sophisticated genres. Try playing like Scotty Moore or singing like Sonny Burgess, two giants of the Rockabilly genre and you’ll understand what I mean. It’s a tough genre to play well.

The Dodge Brothers are, Mike Hammond on lead vocal and Gretsch guitar, Mark Kermode (the well-known film critic) on Double Bass, Vocals and Harmonica, Aly Hirji playing Acoustic Guitar, Vocals and Mandolin, and finally Alex Hammond (Mike’s son) on washboard and percussion, and the group played a mixture of originals and fairly obscure covers, ‘Oh Death’ an example of the group having an aficionado’s ear. The group were excellent; dynamic, suitably energetic and the craft of the genre was well-honed.

It was refreshing to witness a band enjoying themselves on stage, sharing their passion for their music, yet the attention to detail, the essential rockabilly racket always evident. The show was well-paced, with some interesting ballads alongside some very energetic toe tappers.

Mike on lead vocals, his authentic Alabama accent and subtle (and sometimes not so subtle) big Gretsch sound, driven through a Fender Twin amplifier, gave the songs integrity.
All the ingredients were there, a thumping slap bass, played impressively by Mark Kermode, solid acoustic accompaniment, shrill and sharp lead guitar, with the added bonus of percussion and harmony vocals. The group appeared both authentic and somehow original at the same time.

Admittedly, the lyrical content rarely strayed from the genre; transportation, alcohol, guns and relationships. They were not offering anything deep or serious lyrically, and there was an element of this show being escapist, an antidote to our modern troubles and strife.

A few forgotten lyrics by Mike and a misplaced harmonica, “discovered” in an onstage coat pocket actually made the band seem more human, breaking through the fourth wall. Other moments included some backing vocals by the audience about Schlitz (a famous Pilsner beer drank by Elvis in the 1950’s) and a Colt 45, which added to the already enthusiastic atmosphere.

The finale was an uptempo song pitting the older members of the band against the youngest, Mike’s son on percussion. It gradually got faster and faster until they could go no further, ending in a peel of laughter from all concerned.

This band exemplifies all that Over the Hill represents, music played with energy, enthusiasm, passion, commitment and love. A commitment to collaboration and shared experience was evident, again part of our mantra.

Younger musicians might take heed of the showmanship, quality of playing and the care taken with the interaction with the audience.The tightness of material displayed here does not just happen; you could hear a lot of rehearsal time in there but having said that, like most good bands, they make it look effortless.

Beyond that, what really struck me when I was thinking about the gig was, age was not a component in terms of establishing the worth of what the audience had witnessed. I left the Black Box walking into bright daylight forgetting it was indeed an afternoon gig. My heart was lighter and I had a smile on my face. Looking around me the rest of the audience appeared to share those feelings.