“Strange how people who suffer together have stronger connections than people who are most content”.

A recent cardiac episode, an impending divorce, the loss of his job, and with nowhere else to go, a heroin-free Renton returns to Edinburgh from Amsterdam, twenty years after stealing a substantial amount of money from his ‘friends’.

The sequel to Trainspotting has much to admire.

Throughout the film there are constant references to art works and to horror films, the Shining in particular is drawn from directly. A cropped bay-window scene in Montpelier Park reminds one of the works of American painter Edward Hopper’s classic film noir. Hopper was a keen film-goer and his paintings of self-absorbed, lonely, disconnected people, often seen through a window, had inspired other film-makers like Alfred Hitchcock.

As Spud struggles to rebuild his shattered life, the desolate landscape surrounding him is akin to images from Picasso’s Rose Period, his struggles with addiction characterised by the Nosferatu shadow on a wall. 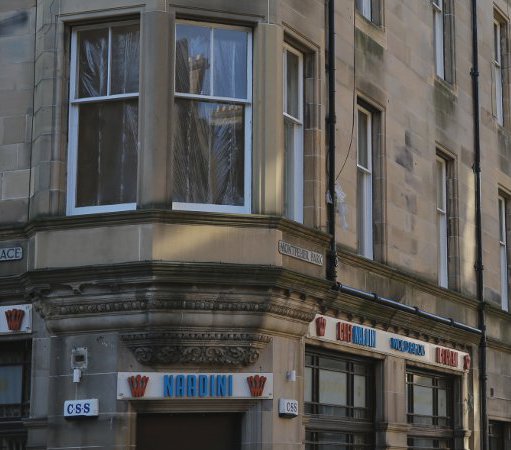 The performances manage to straddle both the past and the present effortlessly, each character carefully crafted to reflect the passing of twenty years, while maintaining the connectedness to their younger selves.

The scarecrow figure of the lovable, gangly Spud appears as a Saltimbanque, a sort of itinerant circus performer. His efforts to maintain his job, his relationship with his family, he has a young son, despite his addiction, have finally collapsed, his inability to account for daylight saving precipitating the loss on all fronts.

Begby is suitably paunchy after a lengthy stint in jail, his menace maintained as he struggles to connect with his wife and teenage son. He returns to petty crime, aiming to partner with his son, but is soon to realise that his son has no interest in following this path.

Simon, aka Sick-Boy, a small time extortionist with a bruising cocaine habit, manages a pub in the now deserted docklands area of Edinburgh. He reflects both the decline of the area and the decline of his own ability for successful criminal activity.

Renton appears lost and directionless; a chameleon which has landed on a kilt.

T2 is a film about reconnection, and within that, an investigation of potential and the consequences of limited choices and poor decision-making.

Freeze frame techniques are used wonderfully in a pathos-provoking scene as the four friends are shown as children, playing in the primary school playground. A sense of innocence, of potential, of possibility, suggests that there might have been other paths for these children to follow. And yet, some of the roads taken in their twenties are in many ways maintained in their forties.

The reconnection of Simon and Renton sees them continue as chancers and petty crooks, applying for European funding, a scam to redevelop the run-down pub into a brothel. And Begbie; the violent monster, his aim is to reconnect with Renton in order to kill him, the malevolence of the first film revisited and undimmed.

Spud, trying to find avenues back to his family, is drawn, unwittingly, into the fray. 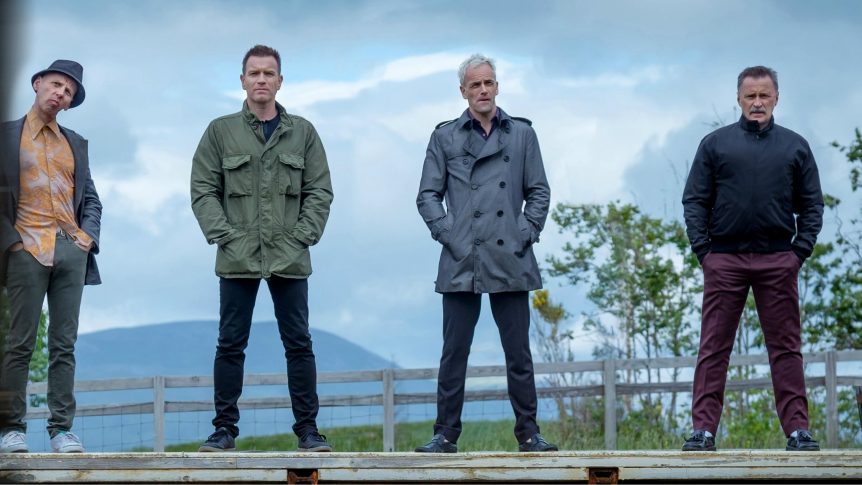 There are truly hilarious moments.

During an excursion to the loyalist King William Arms pub, Simon and Renton are forced to perform an improvised sectarian song which galvanises people who Renton suggests have lost their working-class identity and who feel estranged from the secular UK. Always scamming, they rifle through coats to secure bank cards, finding 1690, the year of the Battle of the Boyne, a reliable pin number to remove cash from loyalist accounts.

Begbie’s struggle with impotence seems cured with a burst of violence towards Renton and the ingestion of substantial amounts of Viagra.

If Trainspotting is Danny Boyle’s Blue Period, with its dark horror of the dead baby and heroin addiction, then T2 is his Rose Period. The film compassionately expands upon the interior lives of the four main characters and grips you emotionally, Bremner, McGregor, Miller and Carlysle, all giving memorable performances.

And redemption; Spud finds his way out of the heroin morasse through the discovery of a previously untapped gift for writing about the lives of the group.

Finally, Anjela Nedyalkova’s Veronika, the Bulgarian prostitute who outsmarts Simon and Renton, ends up with the money and ensures a path for Spud to return to his family, is an additional highlight which could open the door for another sequel.

Defiant it is. Trainspotting Lite it is not.

John Price is a visual artist,  a fan of Bob Dylan and avid filmgoer. Information about his latest exhibition can be seen at the following link –  www.capartscentre.com/2017/02/john-prices-works-on-paper-from-15-feb-through-to-16-mar/