Entitled examines benefit cuts, or their more euphemistic name, ‘welfare reform’, and the effects that cuts, and in particular benefits sanctions, have on the everyday lives of normal people living in Northern Ireland.

The drama wastes no time attempting to convince us that Erin is among the ‘deserving poor’, that she is moral enough or unlucky enough or (insert other arbitrary measures here) enough to claim benefits.

Because at the end of the day, it really doesn’t matter why Erin is in her situation; she simply is. And the reality of that ‘is’ is quite grim: first we watch Erin struggle to find a new job, trying to keep her family afloat, (not just food, but rent, school trips and other pressing needs), as she hunts for employment.

Eventually, she is sanctioned, her benefits cut off for two weeks. WE watch as she seeks help from a local politician who seems more interested in the Easter Rising commemorations than in helping her feed her family. WE see her go to the food bank. WE see her frustrated. WE see her desperate. The play is, at times, funny, at others bitterly sarcastic, and still others, increasingly so as the play progresses, simply distressing. 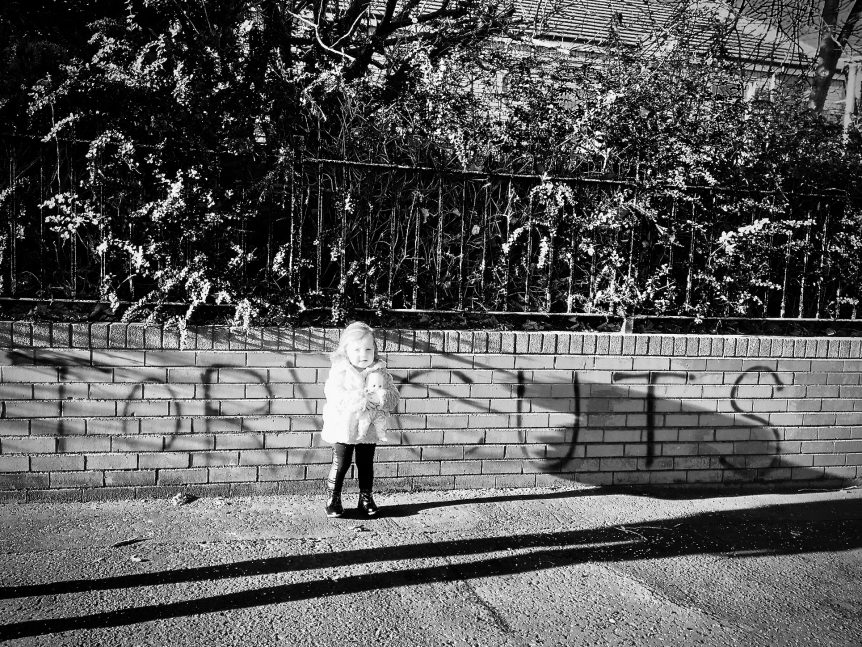 Those of you who are familiar with my previous writings here may recall that I am currently writing a doctoral thesis on community arts in Northern Ireland. In my academic work, there’s an idea I’ve been toying with for a while that I think describes the power that Entitled has to move us.

Performances, so the idea goes, are about empathy, about “feeling along with” others. Audience research indicates that spectators often imagine themselves into the role they are watching, imagining themselves performing the same bodily movements, feeling the same emotions.[1]

Performers, in the meantime, imagine and express the emotions and sensations that they imagine their characters might be feeling in the moment. Some preliminary neurological research suggests that this feeling-along-with might be hardwired into our brains, something that we, to some extent, do automatically when we witness a performance.[2]

It is from igniting this sense of feeling-along-with that the play’s power stems. It is frighteningly easy to feel along with Erin. For many people, her situation is only a few lost pay cheques or unforeseen circumstances away.

Whether or not you have ever personally navigated the benefits system yourself, it would be incredibly difficult to watch this play without feeling something of the character’s emotions, without beginning to gain an empathetic understanding of how cruel the system can be.

Through a combination of privilege and luck, I have been fortunate enough to have never accessed benefits myself, but I too have been poor, I too have worried about making rent or putting food on the table.

I have witnessed countless friends, family, neighbours, co-workers, struggle to make ends meet as single parents, or dealing with the impenetrable intricacies of the benefits system while unemployed or underemployed. My own experience of watching the play was one of ever mounting anxiety, as I watched Erin’s financial situation become more and more dire, as I felt her growing concern that she wouldn’t be able to feed her family.

There is a particularly affecting, and effective, scene in the middle of the play, when Erin is first sanctioned. She phones up her local benefits office to ask why her benefits payments have been stopped. She is staring at two weeks without income, two weeks in which she will still need to buy food and pay for housing.

She is passed from person to person at the benefits office, each telling her that they can’t deal with her problem and must hand her on to someone else. As she repeats her story to each new faceless voice, the rest of the cast members begin to crowd around her, stamping their feet, as recordings of news clips and parades begin to play over the loudspeaker, growing louder and louder. Erin’s voice is eventually drowned out by the sound of stamping feet and flute band music.

The staging is claustrophobic, mimicking the emotions Erin is expressing, as her phone call becomes increasingly frantic, as she tries to make herself heard. We feel that claustrophobia along with her, that sense that the walls are closing in on her. And that’s exactly the point. 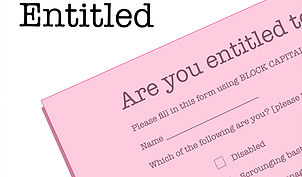 At the same time, it is equally easy to feel along with those that Erin encounters. For example, there is an extended scene in which she visits a food bank for the first time. She is aided by a volunteer. Even as I see glimpses of myself, or of friends and family, in Erin and her children, I also see glimpses of myself in this volunteer. He is well-meaning, but oblivious. He offers Erin cooking classes, suggesting that perhaps her situation would be better if she were given instruction in cooking healthy meals on a budget. He shakes his head in bemusement at those who arrive at and leave the food bank in a taxi, pointing out how expensive this is.

We are fortunate to have so articulate a protagonist as Erin, as she confronts the volunteer on this, pointing out why someone might need to take a taxi to and from a food bank. It is easy to feel along with the food bank volunteer: his eagerness to help; his optimism that things might work out better if only benefits recipients were given cooking classes, if only people walked instead of took taxis, if only (insert other helpful measure here); as well as his ignorance of the grim realities of food poverty.

I also felt his sense of defeat when he admits to Erin that they have no fresh food, as they are dependent on donations and have not been given any; I feel his realization that he can only do so much, and that it really isn’t very much.

Each night following the performance of Entitled, Macha Productions invited a guest speaker to address the audience, to speak about one aspect of benefits cuts. The night I attended, Thursday, the speaker was Ellen Murray, a Green Party candidate for West Belfast in the upcoming Assembly election, who came to discuss the impact of benefits cuts on people with disabilities.

Ellen is a wheelchair user who was recently denied Personal Independence Payment (PIP) for her disability. She gave us a demonstration of what she was asked to do in her disability assessment: she rose from her chair and took two steps forward – steps that were obviously painful and difficult. Based on this, she informed us, the assessor decided that she was able to stand and walk two hundred meters unaided, and thus did not qualify for mobility assistance. Once again, we the audience felt-along-with as we spectated, watching and feeling each difficult, deliberate movement as she walked – though I must admit that most of us could only begin to imagine how painful that action must have been.

Once she had spoken, we were asked to vote in an ‘audience referendum’. The question? ‘Does welfare reform discriminate against people with disabilities?’ The answer was unanimous.