Be warned, T2 is an assault on the ears and the eyes almost from the beginning. But this assault is slightly different from the earlier 1990’s version of Trainspotting.

Yes the outlook is bleak; the characters are bleak, their situations are bleak, and the commentary on the underclass reminds us that these are people, if we are honest, most of us just don’t want to engage with. We want them to be somewhere else, not near us.  Society has let them down and we have let them down, but unlike the first film, it isn’t about heroin use directly. It is about the consequences of the societal decline which leads to the use of heroin and the decisions made by people who succumb to the drug.

Twenty years on, the film examines the lives of the characters as they are now, products of decisions taken years previously. The past features heavily, using fused footage this episode transports the audience well beyond the original film’s timeline, a journey back twenty years previously to the protagonists heroin use and then twenty years before that, to their lives as children. The suggestion is that things might have gone differently had more options been available and within those that were available, different decisions made.

This approach affected me greatly. I felt deeply depressed after the film; I’ve worked with young people in the past who I feel could quite easily have grown up to be Begbie (Robbie Carlyle resurrecting the violent psychopath with requisite venom and menace) and I have known people who have gone off the rails on drink and drugs. Some of them aren’t with us any longer.  This personal connection meant that the film moved me in ways I maybe did not want to be moved. 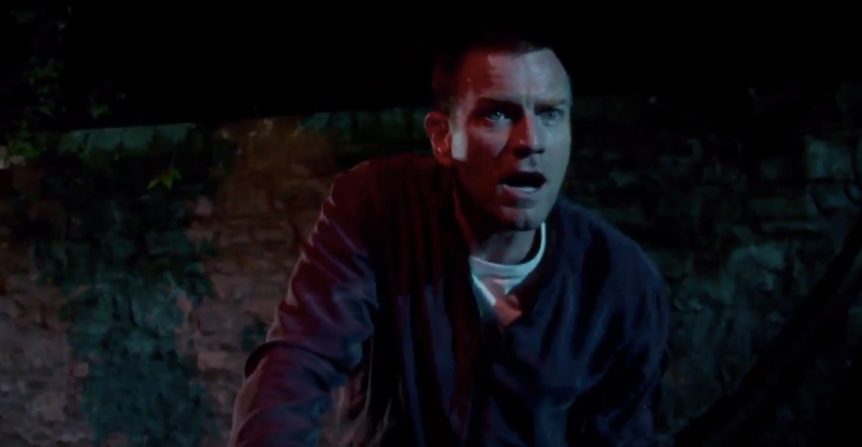 The landscape is TS Elliott’s Wasteland; an ironic Port Sunshine sitting amidst the desolation of a once thriving area. Images of cars being thrown on the rust heap are shown constantly; they may as well be the inhabitants. The high-rise flats, the 1960’s answer to new housing, built to eradicate poverty, are being raised to the ground, a failure in every aspect.

In particular, inside no 13, (definitely unlucky for Spud the junkie whose habit dominates his existence), busted front door, almost empty flat, free of domestic niceties. Maybe it has been robbed or its contents sold off in order to purchase drugs.

Spud (played brilliantly by Ewan Bremner), the failure, the junkie, broken, driven now to suicide. We are witness to a horrific attempted suicide and an equally horrific return to life. Spud comes through purgatory and is given a second chance.

Positive images like this are fleeting, occurring briefly at the beginning as Renton (Ewan McGregor) returns to Edinburgh only to find the city geared completely towards tourists or the moneyed folk.  For those who are neither, their aspirations are revenge and moneymaking. “First there is opportunity, then there’s betrayal”.

The Sun is seen fleetingly, firstly through shadows, on Spud’s shirt and in his flat. It’s as if the film is harking back to medieval literature when the sun was another way of saying the Son of God, visible in parts in a godless world of commerce and capital goods. It’s telling that the successful lawyer needs to make it clear to Renton just how much she earns. She represents one world, he another.

Renton, (Ewan McGregor) in his 40’s, drug free, but at a crossroads, broken marriage, lost job and unable to father children, connects with his “friend” Simon (Jonny Lee Miller) now an extortionist and cocaine user.

Their friendship bonds around a new criminal endeavour, an attempt to defraud a funding agency to obtain money for the development of the broken down pub Simon owns into a brothel, the opportunity which underpins the plot.

Trains and journeys run all the way through the film even to the closing credits, it’s about trips; real and drug induced.

People are always on the move like a Cezanne apple. ‘I will astonish Paris with an Apple!’ he once said. Boyle does it in film for the 21st Century, offering a blurry set of people, off kilter, and off balance.

The updating of the original slogan Choose Life, (for me it was about ‘No choice’, not ‘Choose Life’), Renton’s original soliloquy is a choice for others, a material world, a better life; but it’s not for them. The same applies today, “choose Facebook, choose Iphone……choose unfulfilled promise.”

The question of friendship and the impact drugs and poverty has on you. Stealing from friends is stealing only from another victim Renton explains. There is no one else left to steal from.

Irvine Welsh plays perfectly the fence Mikey Forester; he takes in the stolen goods and passes on the money.  I’m still trying to work out if his cameo is more significant than him just being the author.

We see a country scene, another replay from the first film, only to realise it’s a memorial. We hear brutally about the two deaths, a child and a close friend, both directly attributed to drugs.

For me the music features in its own right as another character.  Late in the film, Renton returning to his bedroom in his parents’ house, is reluctant to play Iggy Pop’s Lust for life. It’s a throw-back to one of the most iconic tracks of the original movie, and because it’s such a strong brand, even after only hearing two or three notes it still plays in your mind.

As well as the music, drug induced visuals in lurid colours and projections feature heavily throughout, upside down stags as well as a mirrored room with a macabre head bursting through are drawn from other movies.

There are so many body blows in the movie even the dark humour does little to lift that, in some cases actually intensifying it. Begbie’s sexual reaction to chasing Renton in a car park and slicing open his arm with a knife is a fine example.  The robbing of a Loyalist Club another.

It reminds me of Ken Loach’s I Daniel Blake in many ways, a system that leaves people behind, discarded.  There is little choice.

It’s not a perfect film, Ewan and Johnny Lee strutting in their mock kilts look way too good to be drug addled junkies.  There are parts where it descends into a carry on romp, the blackmail scenes in particular where one blackmail victim struts out of a confrontation to stand in a corridor waiting on a lift in unabashed nakedness.

But there is a sense of justice, Spud being given back his life, he’s recognised as a writer and re engages with his family.

It is the women who are the real strength behind the scenes. Begbie’s wife bringing up a son and protecting him from his vengeful father.  Gail looking after her and Spud’s children, and Veronica.

Veronica, the namesake of the woman who tended Christ during his crucifixion; the woman who unites all and recognises Spud’s childlike writing talents.  Veronika outwits the men and gets the money, her return to Bulgaria gives us an unexpected view of her former life, the impression is given that she needed to find a way to make a little money and always had it in her mind to return home to her son.

Boyle and Hodge have created a stand-alone movie in T2.  It came with a lot of expectation, even trepidation. Of course T2 harks back to the original, but, and it’s an important but, it is of its time and monitors the relentlessness, desolation and misalignment of our current climate which is where I think it succeeds as a film. There is hope at the end but you have to work hard to grasp that aspect of the film.

The impact of this film on me was so substantial it’s only days later that I feel like writing about it.  Who knows how I’ll feel in a week.