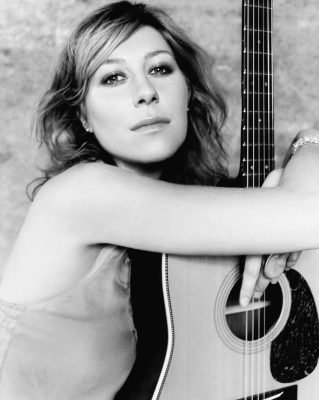 Martha’s voice, a gravelly mixture of Kate and Anna McGarrigle,  Louden Wainwright the III, Rufus Wainwright and her own earthy edge. Smooth runs up to high notes with escalating phrasing, working together create an ethereal quality. Then, “I know you’re married but I have feelings too”; she built up to this song with some wonderful guitar work.

‘Franci’, a song for her son Frances, followed by ‘Frances’, from Rufus Wainright. Truly beautiful lullabies.

A charcoal grey boiler suit, she explains, had belonged to her mother, worn now as a tribute; Kate McGarrigle died in 2010. She played a tune that her Mum had written explaining afterwards that it frustrated her to get the words wrong.

She said she wouldn’t get political but then strummed a few chords, ‘I’ll play something else…something for Trump”. “Bloody Mother F…..g A…..e” follows. The audience connects.

A synth based track by Anna McGarrigle, written for the new album; her Aunt is obsessed with synth music and plays and writes some ‘really weird shit!’ ‘One of Us’ written with Glen Hansard for the album, I can hear the ‘Falling Slowly’ style throughout. Lyrically one of the weaker pieces.

A song for Arcangelo, her other son, a necessary requirement to maintain domestic harmony. He was jealous of the songs on the album for his brother Frances! ‘Window’ a darker quality afforded here. A Leonard Cohen song, ‘Chelsea Hotel’, definitively emotive, at this point it is a pleasure to sit in front of and listen to a strong,  sinewy woman.

There was much post gig discussion in Belfast regarding the intonations and subtle nuances of the gig, and that is what a well-paced, sharp, at times humorous, at others, truly sad, set should offer. An excellent job done here by the Out to Lunch programmers and Kieran Gilmore from the Open House Festival, as there was much on offer from the mix of the two acts. ‘Goodnight City’, Martha Wainright’s latest recording is worth listening to and is out now on Cadence Music and PIAS.

Seonaid Murray is a community musician, a tenor sax player and film and theatre enthusiast.