A slowed down version of Lou Reed’s “Perfect Day” plays through the opening credits of T2, Danny Boyle’s revisiting of Trainspotting twenty years on from the original. Mark Renton (Ewan McGregor) has chosen life; in Amsterdam. His alternative addiction to heroin; running.

On the treadmill, reflections on the innocence of childhood, images of his friends Spud, Sickboy and Begbie, smiling faces looking up from crisp packets and Iron Brew in local pubs and social clubs, are shattered, as he collapses; a heart attack, and loses consciousness.

Renton returns, new crew cut, walking through Edinburgh airport he is welcomed to the City by a woman dressed in Tartan. He asks her where she is from…… “Latvia”! The message, nothing is as it seems, never judge a book by its cover, Edinburgh has changed in his absence.

On returning to his family home; his mother has died and he has missed her funeral.  His old bedroom, is as it was, the wall paper patterned with lots of different types of trains. Flicking through his record stack he stops at the Iggy Pop LP.

He loads the record (need I remark about the multi-faceted meaning behind the ‘needle’ on the record player?) but once the first few frenetic chords of “Lust for Life” climb out of the grooves, he shuts it off. It is too much to handle, the music is intrinsic with a time that he no longer knows or is part of. He has to find a way to reconnect.

A reconnection with Spud (Ewan Bremner) results in Renton saving Spud’s life. Spud screams through the suicide induced vomiting, ‘You ruined my life and now you’re ruining my fucking death too’!

Robert Carlisle is brilliant as the psychopathic Begbie. He escapes from jail and reconnects with his family. His son looks like a teenager who doesn’t see much of the light of day, sporting a vampire like complexion.

He tells his father he wants to study Hotel Management! This is so foreign to Begbie, whose aim is to recruit his son for domestic burglaries and a life of petty crime.When this doesn’t work out he challenges the authenticity of his son, offering him a ‘free swing’. Any son of his, he surmises, would hit him. When his son declines, Begbie walks out the door. 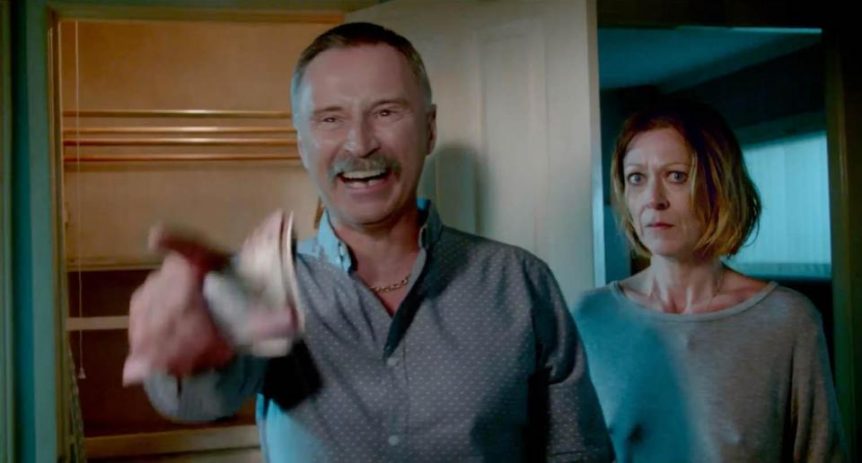 None of main protagonists are able to get what they want, particularly with regards their families. Mark wants to have children, so much so he makes up fictional children, but is unable to, leading to the breakdown of his marriage.

Spud wants to be with his family and is estranged through his addiction, his son embarrassed by him, his wife no longer prepared to support him.

Begbie has lost touch with his son’s reality, and Sickboy is reduced to petty extortion and pimping his girlfriend, Veronica, to fund his drug habit. He is reminded that he lost his child through the neglect brought about by his heroin addiction.

All of the characters have lost a grip on fact and fiction and fluctuate between their imagination, drug hallucinations, fragments of their memories and hard, cold reality.

The name of Sickboy’s bar is ‘The Port Sunshine’ and the name itself seems fictional and unobtainable.

The answer to this is for Simon and Mark to embark on a venture to redevelop the rundown bar into a high end brothel. To do this money has to be obtained fraudulently from a government agency.

Throughout the darkness of the film, the beauty of Spuds poetry shines through, as does the strength of Veronica’s (Anjela Nedyalkova) character. She is smart and in control and when the time is right saves herself, gets the money and supports Spud.

The musical soundtrack is magnificent and ‘Lust for Life’ blasts through the cinema speakers at the end of the film as Mark dances in his room.

Choose: Dancing, Choose: Family, Choose: Poetry, Choose Life. This seems to be the life cycle of this film, a far cry from the battle hymn of the protagonists in the first film

The film is multifaceted and there are many elements to draw attention to.

The cutting and editing chops and changes the imagery, some scenes freeze and others are conducted in slow motion. This gives a water colour effect to the cinematography. It is impressionistic and impressive.

Shadows haunt all of the characters in the film. There are visual shadows, Spud’s struggle with his addiction is characterised in shadows, and metaphorically audible shadows in the language of the script and the look in the characters’ eyes.

Time is the central theme. There is a sense of the main characters having; no time; not enough time; running out of time; too much time and ‘doing time’. Spud references the time change from British Winter to Summer time as the cause of his missed appointments, work, dole office, family visits,  which lead ultimately back to heroin use. 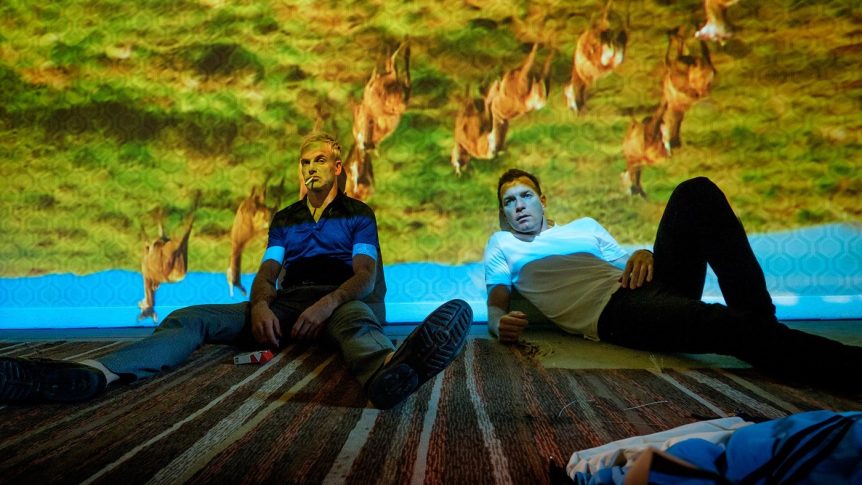 One other thing which crossed my mind. Is it possible the opening scene leads not to “real” events, but to imagined events, playing out in Renton’s mind as he loses consciousness? Perhaps this is him dying, his final thoughts the imagining of what might have happened if he had gone home?

All in all the film is excellent, an impressive follow-up to the original, sharp storytelling, wonderful music and an impressive array of acting talent which makes for a film worth seeing if you get the opportunity.

Seonaid Murray is a community musician, saxophonist and film enthusiast.