It is said that the personal is political.  A one woman show: ‘Rainbows and Razorblades’ by Chelley McLear takes a true family story and by the end makes the audience ask questions about whether the education and health services are given sufficient resources to deal with mental health issues among our young people?

The answer I took away is a resounding “No”, which makes me wonder if we should all ask candidates in the Northern Ireland Assembly election in March what resources they intend to allocate to supporting young people experiencing suicidal feelings, depression and despair?

‘Rainbows and Razorblades’ was performed in a space within the Arts Resource Centre building in Belfast with a minimalist backdrop and some sound effects.

Given the relatively low production costs, it could, and should, be performed in other community venues. The question and answer session at the end produced a useful dialogue between writer and audience about the issues and was a positive way to end the evening. 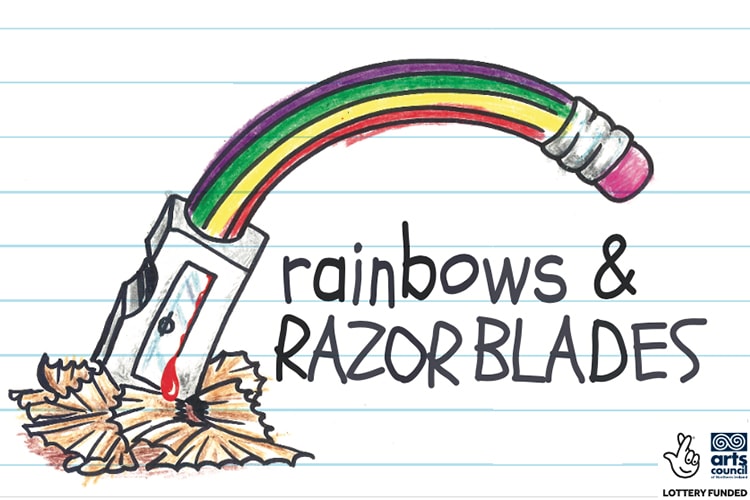 This is a drama set in a domestic setting – think anyone’s untidy living room – a mother stands in a red dressing gown.  There are sound effects, the voice of Chelley’s daughter, whose plight Chelley reveals during her monologue. Her use of words stuck to the wall such as “What am I supposed to do?” emphasise key moments in the drama and the mother’s feelings of sometimes not being able to cope. “Two jobs, two kids and a roof over their heads is sometimes too much.”

Her teenage daughter faces bullying and gets into trouble at school.  She cuts herself and attempts suicide.  In one suicide attempt Chelley describes how her son received a message on Facebook to check on his sister, who is found with “limp hands bearing no prayers for tomorrow” with shouts from her mother of “how many did you take?”

As Chelley said: “Sometimes the dishes have to wait.”

Her daughter appears not to have received the help she needed and Chelley had to stay constantly on high alert, “You don’t sleep when your child wants to die.”

The tragedy is laced with humour.  She is a single parent: “Two kids, boy and girl but husband split before the fourth wedding anniversary.” So she tried dating online, where people weren’t always who they appeared to be in their profiles: “Call me cynical but I didn’t think Brad Pitt lives in Ballygomartin.”

Ultimately there is hope for both daughter and mother; the teenager now makes music and art and lives independently in her own flat and Chelley ends the show by taking down the clothes hanging on the backdrop of the set and packing her bag.

She is setting off for a new life and love in America.

Chelley McLear promises another performance of ‘Rainbows and Razorblades’ before she leaves for ‘Trump-ton’. I hope she does and that all our politicians are sent a ticket.

Una Murphy is co-founder of VIEW/digital  – an online magazine for the community and voluntary sector – you can access this at the following link – viewdigital.org  –  Una coordinates digital and broadcast media workshops. She has produced and directed current affairs/factual/documentary programmes for UTV, TG4, RTE and BBC, reported for The Daily Mirror and The Irish Times,