Hagen is a stand-up comedian from Denmark, and as far as I understand she lives in London.

Despite being almost always defined as a ‘Danish comedian’, whether in print or as part of her opening of the show, there is nothing particularly Danish about her comedic work. She doesn’t examine Danish stereotypes or offer insights through the lens of the Danish outsider; she just happened to be born there.

She has had a relatively meteoric rise, arriving in London in 2012 and almost immediately being identified as “one to watch”. She won the Laughing Horse New Act of the Year in 2013, and she was awarded best newcomer at the Edinburgh Fringe Festival for ´Bubblewrap´. 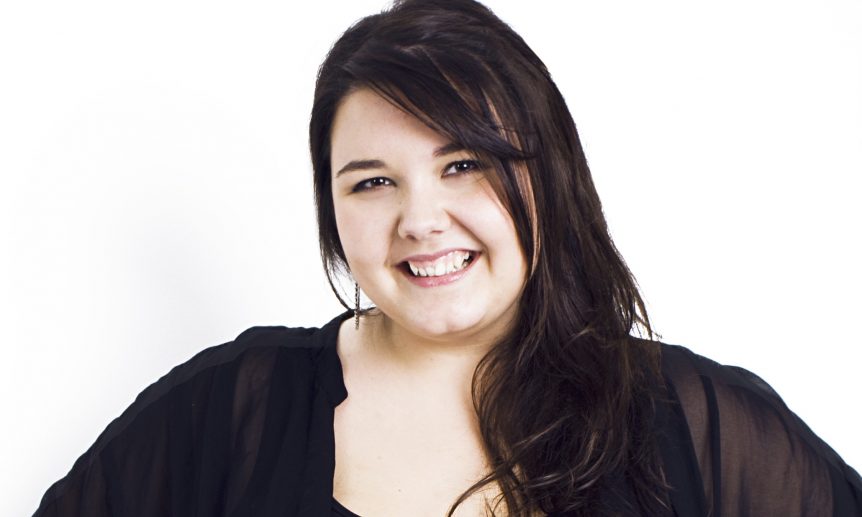 Some reviewers have suggested that Hagan has developed a new style of Mental Health Aware comedy. Hagen suffers from anxiety attacks and following an episode where she had an attack while part of an audience, she decided that no one should experience the same situation during her shows. She requires the venues to be “safe spaces” or “anxiety-free”. Unfortunately for the comedian, during that evening she had to wait seated on the stage for 15 minutes before the show started, due to the lack of a green room. She admitted she wasn´t feeling comfortable.

I knew very little about her but the thing that attracted me to choose this show to review, was the closing line from the CQAF programme that described the show as “not suitable for misogynists, anti-feminists, bigots or bozos”.

I did some research, watched a few Youtube videos and read some reviews, and went along hoping for the best.

This one woman-one-hour long performance revolves around the story of Ip, her grandfather. Sofie, and her single mother, end up living with him in a remote town in Denmark named “Shametown”. Her childhood and early teenage memories are the central story.

Ip is presented to the audience as a monster, and the show investigates the traumas experienced living with this man, who is abusive, who sets out to control others’ emotions; life with him consisted of constant mistreatment, including targeting Sofie because of her weight.

The narrative evolves chronologically, interrupted by jokes about Danish Nazism, Westlife´s singer Bryan McFadden’s decline (she was apparently an obsessive Westlife fan) Trump´s recent election and a few difficult to laugh at “jokes” about being fat.

The concluding section of the show reveals how after years of experiencing constant abuse, Sofie’s grandmother confronted her abusive husband, at the age of 93.

The message; that it is never too late to challenge abusive behaviour, and that no matter how difficult the situation, courage must be summoned to challenge domestic abuse, and from there a rather substantial leap to challenging bigotry and fascism.

Sofie Hagen is a likeable and charming performer, and her comedic orientation appeared to connect with the audience, an eclectic group ranging from people in their mid 20’s through to a much older demographic.

One of the difficulties I had with the show was that despite Hagen’s mental health orientation, there were areas where openings to explore such issues were largely ignored.

One could get the impression that Ip may have had mental health issues, exacerbated by a period of isolation when serving in the Danish army on a boat patrolling near Greenland. There may have been something there to investigate, either comedically, or as an attempt at an explanation for his contemptible behaviour.

I wasn’t totally convinced by the more therapeutic elements on offer; the show is highly personalised, and any universality appeared tacked on rather than emerging naturally from the material.

Based on this performance, while at times a harrowing tale, the show was a little light on the comedy.

Gabri Gomez is originally from Lugo in Spain and works for Community Arts Partnership.