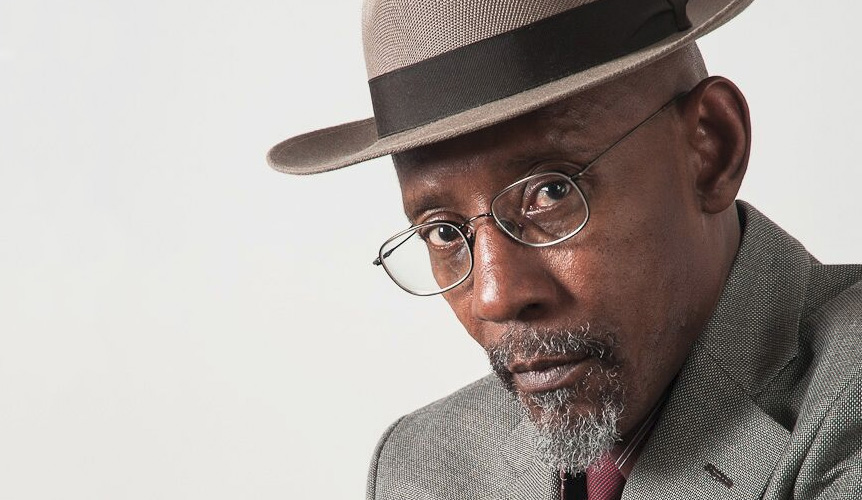 Linton Kwesi Johnson’s poetry has been described as angry.  I would agree; however, I would be quick to add that it is a controlled anger.  The anger in the verses comes from a place rooted in experience.

The audience in the Marquee at Custom House Square, Belfast, is an eclectic mix; from politicians to journalists; from the elderly to the teenage; and of varied ethnic backgrounds.

When Johnson takes the stage he imparts that his main influence is the work of Langston Hughes and ‘Jazz Poetry’.  It’s easy to draw comparisons between Johnson and Hughes in that they are both, to differing degrees, concerned with race; although, it could be argued that Johnson has attempted to give a voice to black youth living in a racially marginalised environment, rather than Hughes’ more observational approach.

Johnson has said he sees poetry as a ‘cultural weapon’, and from the first poem, ‘Five Nights of Bleeding’, (the reading flowing in chronological order by decade from his book Selected Poems): ‘madness … madness … / madness tight on the heads of the rebels / the bitterness erupts like a hot-blast broke glass’, there is a sense of how he fashioned his weaponry.

The poem recounts in six sections five nights of rioting and violence throughout London in the seventies, but the thread that runs through it is the misunderstood and overlooked plight of the young black person; Johnson agrees it’s ‘madness’, but he is sympathetic to the reasons behind the unrest.

The audience claps enthusiastically between poems, Johnson responds by raising a hand and muttering, ‘It’s alright, it’s alright’ before moving on to the next piece.  This is a feature of the evening; he seems humble and eager to deliver the next poem, without coming across as impatient.

Poems about Caribbean migrants helping to reconstruct Britain after WWII and encountering racism, and young black men facing police brutality are brought to life in ‘It Noh Funny’ and ‘Sonny’s Lettah’ respectively.  Johnson says that when he writes he, ‘always has a bassline at the back of his mind’, and this is certainly evident as he lingers rhythmically over the lines in his deep Jamaican drawl.

‘All Wi Doin is Defendin’ is preceded by Johnson’s statement regarding police brutality in seventies London, that ‘if it was war they wanted, it was war they were gonna get.’  The speaker is merely ‘defendin’ what is his, finishing emphatically with the line, ‘freedom is a very fine thing’.

‘More Time’, a poem about wanting a shorter working week, is greeted with rapturous applause and beers are raised and toasted as Johnson again lifts his hand to quieten the hubbub before moving on to an elegy for his late father, a rare segue from the politically charged tone of the evening.

The highlight for me, was the twelfth and final poem, ‘New Word Hawdah’ (New World Order).  This is a poem that is easier to hear than to read, especially if one is not familiar with Johnson’s Jamaican patois, as it does require the reader to tune their literary radar.  It’s a poem that references the Rwandan Genocide of 1994, and is a direct response from Johnson to his utter disdain for the term ‘ethnic cleansing’, a phrase he believes partly serves to justify atrocity.

He speaks of ‘our duty to use language responsibly’, and the importance to ‘define humanity through language’ – the implication being that each of us, and particularly writers, have a responsibility to choose our words wisely, to avoid perpetuating negative cultural views; his central message – that we have a responsibility to each other as world citizens to treat people with respect.