It’s that time of year again…1690 and all that. But did you know that when King William, the victor of the Battle of Boyne, needed cash for a navy, he decided that a tax on gin was the way to do it?

Madame Geneva by Jo Egan is subtitled, ‘A Tale of Gin and Prostitution’.  While prostitution has been called ‘the oldest profession’, gin landed with King Billy when he was invited to take over the British throne.  He also set up the Bank of England. Ultimately this is a story of Gin, Prostitution and Capital.

One of the funniest scenes in this bawdy tale is in a spa when King William (dressed in an orange towel) decides he will not only introduce a tax on gin but also set up the Bank of England in order to secure the money he needs to wage war against the French and loan money to the government to pay his salary.  At one point millions of gallons of gin were drank and thousands of people died from the abuse of alcohol.

Anyone looking at ‘Gin Alley’, the etching by William Hogarth  (he is one of the many historical figures to feature in the play) which the artist produced as part of a campaign against the uncontrolled production and sale of cheap gin, are aghast at the central image of the drunken mother whose child is left to fall from her arms.

Child murder is one of themes which emerges in the play, with one notorious case mentioned in which a mother takes her child from the Poor House and subsequently leaves the child to die naked and bound when she goes off to buy gin, trading in the child’s clothes for cash.  Is this a parallel story of what King William did to the entire country by rising money through the gin tax?

We see scenes reminiscent of the film ‘Wall Street’ when investors desperately scramble to buy shares in the South Seas Company.  The resulting ‘South Sea Bubble’ when investors lost their cash is very well handled by the amateur Macha ensemble of actors, who with the professional actors really contribute to the play, moving the story along with rousing songs and well choreographed dance and crowd scenes. 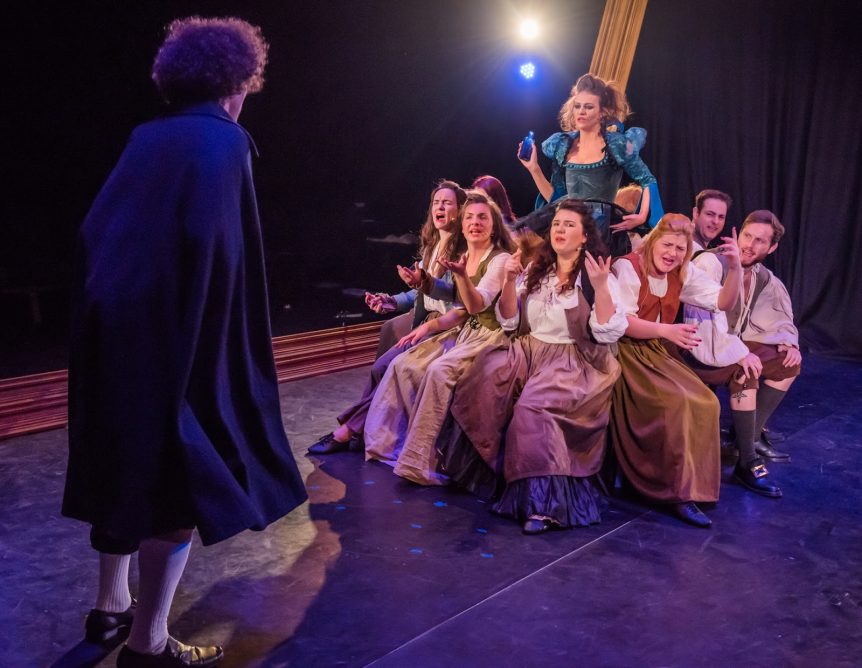 But the central figure – in an electric blue gown – is Madame Geneva herself, played by Kerri Quinn.  Like any addiction all sections of society find her hard to resist; from politicians like Britain’s Prime Minister Sir Robert Walpole who is portrayed as an inebriated figure in the play, always with a glass in his hand (in real life he opposed a law prohibiting selling gin by make it expensive which was repealed after seven years) to the poorest women selling sex on the streets of London.Madame Geneva is also a play about patriarchy.

With women so poor that the sex industry is their only hope of survival and who are in turn condemned or ‘morally reformed’ by men who set up the first Magdalene Laundry institution to house ‘fallen women’ in London.  These notorious institutions were brought to Ireland by the Lord Lieutenant of the day.

The writer Jo Egan has a special insight into the rule of these institutions – skilfully displayed in the play by a scene in which women were admonished for unacceptable behaviour, such as looking out of the window of the Magdalene Laundry.  The institution took away one’s identity by taking away one’s own name and the writer has used her own experience in a mother and baby home in Ireland in the late 1970s to great effect.

Actors John Cronin, Rhys Dunlop, Tony Flynn and Keith Singleton contribute to making this drama one to watch. I enjoyed the music and dance (particularly an energetic disco scene when gin prohibition ended).  The stage design incorporating a giant gilt picture frame was an excellent way to showcase the historical figures featured in the play.

This is another thought provoking production by Macha Productions co-founders Jo Egan and Fionnuala Kennedy, who have also recently staged ‘Entitled’ which looks at sanctions against a woman on welfare benefits and are soon to put on a production of ‘Hostel’ which explores the experience of a mother and her child living in a hostel

I hope the addictive Madame Geneva gets another chance to strut her stuff soon…perhaps after the ‘marching season’?

Una Murphy is co-founder of VIEW/digital  – an online magazine for the community and voluntary sector – you can access this at the following link – viewdigital.org  –  Una coordinates digital and broadcast media workshops. She has produced and directed current affairs/factual/documentary programmes for UTV, TG4, RTE and BBC, reported for The Daily Mirror and The Irish Times.