Home » The Monthly » Inside out and Outside In : Perspectives on Autism by Shelley Tracey

“Inside Out” was the title of the last film in Queen’s Film Theatre’s (QFT) autism-friendly screening programme. This programme, funded by the Department for Communities, has involved six monthly screenings.

A previous article in CAP’s Monthly about autism explored the theories and ideas about autism which have informed the screenings. This article, in contrast, zooms in on experiences of autism (or ASD, as it is commonly known), from the perspectives of parents of children with autism, including those who have attended the screenings at QFT. It also explores the experiences of children and young people with autism themselves, drawing on some memoirs and online resources.

A common experience for people with autism is the difficulty of understanding, expressing and managing their emotions. One of the reviewers quoted in Temple Grandin’s book about her own ASD refers to the “interiority” of autism . The communication challenges for young people with ASD can make it difficult for those close to them to understand what they are feeling; this has a potential impact on the ability of parents and carers to reassure them and to ally the anxiety which can accompany ASD.

One of the films screened at QFT was “Where the Wild Things Are”, an adaptation of the children’s book by Maurice Sendak. It tells the story of an isolated boy who is frightened and frustrated by disagreements with his family, and runs away to sea. He lands up on an island where he lives with a series of monsters, who are having difficulties relating to each other. Max becomes king of the island and learns about the consequences of his anger; he also realises that he is loved and appreciated, and that he has talents and strengths. As in all good fantasies, Max arrives home again at the same time as he left it, without anyone being aware that he was away. However, his issues have been resolved. He feels happy and loved. Parents who attended the screening with their children commented on the insights into autism which this film offered; one noted:

“It was showing the confusion of a child with ASD when it experiences different emotions and what kinds of coping mechanisms it might employ.”

The animated film “Inside Out” focuses on the emotions of a girl called Riley, who is portrayed from the inside out. The other characters, representing her emotions, are called Joy, Sadness, Anger, Disgust and Fear. This externalisation of emotions offers audience members a common experience which they can discuss with their families and carers, and a shared language for discussing feelings.

The writer Ron Suskind has developed the idea that cartoon characters can offer a bridge to connect children with autism with their families and carers. He devised a method to communicate with his autistic son by using the child’s preoccupation with Disney characters.

While the preoccupations experienced by many children with ASD are sometimes regarded as a cause for concern, Suskind and his wife Cornelia found ways for using these obsessions as “pathways to growth”. Suskind explores these pathways in his book Life, Animated, which has also taken the form of an Oscar-nominated documentary . The book and film describe how the Suskinds watched Disney films with their son Owen, and discussed the characters and their feelings, relating them to family life.

Suskind proposes that, contrary to popular belief, children with autism have the full range of emotions. What they have difficulty with is in sharing their emotions with others.

This idea is corroborated in two books about his experience of autism by Naoki Higashida, who is unable to speak. The first, The Reason I Jump, was written when he was thirteen years old, using an alphabet grid. The book is translated from the Japanese by David Mitchell and KA Yoshida, the award-winning writer and his wife. David Mitchell also introduces the book, writing from his experience as the parent of an autistic child. This introduction begins with a description of what it is like to have autism:

“The thirteen-year-old-author of this book invites you, his reader, to imagine a daily life in which your faculty of speech is taken away. Explaining that you’re hungry, or tired, or in pain, is now as beyond your powers as a chat with a friend … your mind is a room where twenty radios, all turned to different stations, are blaring out voices and music. The radios have no off-switches or volume controls, the room you’re in has no door or window, and relief will come only when you’re too exhausted to stay awake. ”

The sense which Mitchell conveys of feeling isolated and overwhelmed by sensory overload is corroborated throughout The Reason I Jump. The book is structured around a series of questions which people who don’t have autism might want to ask those who do have it, such as “Why do you jump?” This moving book reveals Higashida’s intense feelings, such as his love for his parents and his frustration that he is unable to express this. 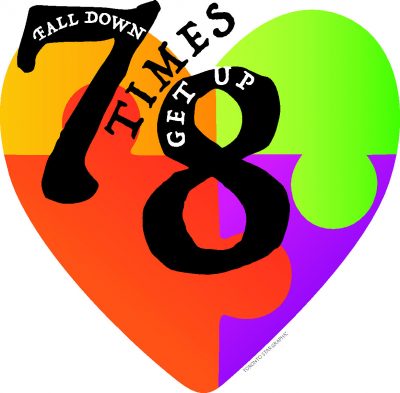 Higashida’s second book, Fall Down 7 Times Get Up 8 , is also introduced by David Mitchell. It was written when he was in his early twenties, and consists of a series of essays about autism. One of the main themes is the importance for autistic people of having encouragement and determining their own goals in life.

The following extract from the book conveys the liberating effect which written communication has for Higashida: “Spoken language is a blue sea. Everyone else is swimming, diving and frolicking freely, while I’m alone, stuck in a tiny boat, swayed from side to side. Rushing towards me are waves of sound… When I’m working on my alphabet grid or my computer, I feel as if someone’s cast a magic spell and turned me into a dolphin.”