The Labour Party released their ‘Acting Up Report: Labour’s Inquiry into Access and Diversity in the Performing Arts’ recently, (The full text of the report can be found at the link below

and for those interested in reading a shorter version, the Executive Summary can be found at the following link

The report looks specifically at film, television, and theatre, but its findings have ramifications for other artistic genres as well. In this article, I’d like to discuss the report and some of its recommendations, and offer a few suggestions for ways in which we might begin to join the conversation in Northern Ireland.

First of all, it’s worth noting that little of the information in this report is a surprise. Its four key points, as summarized by MPs Tracy Brabin and Gloria De Piero (See the Guardian article at the following link),

Class crisis in the arts must be cracked, says Labour report (the Guardian – 10 August 2017)

who led the inquiry, deal with ‘the systemic eradication of arts education in schools, sky-high drama school audition fees, chronic low pay and a lack of diversity behind the scenes’. We know these things. We see them happening around us. This is not new. Nevertheless, it is encouraging to see a major political party address these issues together, as factors that feed into and exacerbate one another.

What I like most about the Acting Up Report is that it addresses both race and socioeconomic class, recognizing that the two aspects intersect with one another (along with other factors such as gender, sexuality, ability, and age) without conflating them. I also like that the report understands diversity as an issue of representation – ‘Who we see on stage and screen, what stories are being told and where they are set impacts the way we see ourselves and how the world sees us’ – while also recognizing that diversity is about equality, too. I think that it can be very easy to reduce diversity to one or the other of these aspects – as either about making sure that viewers see themselves represented on screen or stage, or about ensuring that everyone is paid equitably – so I am pleased that this report recognizes both of these issues, acknowledges their related-ness, and addresses them together. 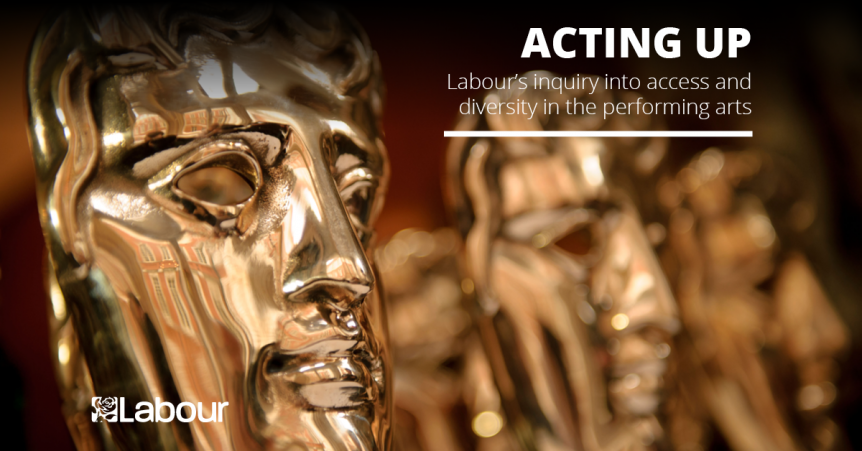 Further Intersections, and an Opportunity

While the report notes the importance of intersectionality, and recognizes that women, actors with disabilities, LGBTQ+ actors, and older actors face additional barriers of access, it does not address these factors in detail in the same way that it does race and class. Now, this is twenty-six page report, cover to cover, so its scope was obviously limited, and within those limitations it works well. I’m not saying that the report ought to have addressed those factors (though we should absolutely seek out research that does so, and encourage our government and political parties to do the same), what I am saying is that this limitation opens up a space for those of us involved in the arts here in Ireland, North and South, to join the conversation. To give just one example, the #WTFeministsNI campaign called attention to the significant lack of gender equality in Irish theatre, and ushered in the beginnings of significant changes. They produced a substantial, Arts Council funded research report  – this can be found at the link below

on gender in Irish theatre, and made specific policy and research recommendations,

which can serve as models to others pursuing equality elsewhere. (By the way, here’s the link to the Waking the Feminists NI Facebook page – //www.facebook.com/WakingTheFeminists/ )

Another aspect of the Acting Up Report that I quite like is its focus on the arts in schools. In my experience, schools sometimes seem to be left out of these conversations on access and inclusion. For example, education was not much of a factor in the DCAL (now DFC) ten-year arts strategy proposed in late 2015 (though to be fair, a lot was missing from that strategy, and education was not the most glaring omission). However, education didn’t feature very prominently in the conversations I had about the strategy with members of the sector either, and that bothered me a little. (Admittedly, this is an area that is very near and dear to my own heart, as I got my start in the arts through the wind band programme in my public school system – notably, a school system in a predominantly working-class area.)

As the Acting Up Report rightly points out, looking at arts provision (or the lack thereof) in primary and secondary schools, and examining the structures of exclusion at the university/arts school level, is vital to helping us address these massive problems around inequality in the arts. I believe members of the arts sector in Northern Ireland are already very aware of this connection, and I have been fortunate to attend events where artists and academics, and numerous people who are both, have fruitful conversations with one another. Going forward, I would personally like to see the local arts sector engage this question of education at the policy level as well, encouraging our governing bodies to pursue creative, robust arts education programmes in schools, in addition to creative and robust arts programmes outside of schools (and, let’s not forget, more robust funding!).

That said, I think another of the ways in which our own sector can speak back into the Acting Up Report is by reminding our policy makers that schools are not the only places we should look for arts education. The community arts sector in Northern Ireland has an incredibly rich heritage, resulting in substantial knowledge and expertise among our arts workers. We can remind the writers and researchers behind this report, and the politicians who will hopefully read it and take it to heart, that arts education in schools is important, and that arts education can take place outside of and beyond our schools as well.

At the end of the day, I’m not overly optimistic that this report from the Labour Party will make much of a difference for us here. As I said at the very beginning of this article, none of this information is really new. Additionally, while the report addresses what it calls ‘the London-centrism of the industry’, and the corresponding barriers for ‘regional’ writers, actors, and directors, its focus is very clearly on England.

This echoes the Labour Party’s manifesto,(See the link below)

whose language about the arts, while very promising, focused heavily on England. For example, the manifesto promises that ‘Labour will introduce an arts pupil premium to every primary school in England’, but makes no mention of Scotland, Wales, or Northern Ireland. A press write-up on the manifesto from May even states that the promised ‘£1 billion culture fund’ would be specifically administered by the Arts Council England,

though whether that was a misprint on the part of The Stage, or whether it was present in the manifesto and has since been changed, is unclear.

Now I do recognize that Labour’s influence in Northern Ireland is certainly limited, given the dominance of homegrown parties like the DUP and Sinn Féin in our local politics (including decisions on arts funding). Nevertheless, it would be nice to see a political report, plan, or manifesto that acknowledges the specific challenges faced by artists from Northern Ireland (and those from the South as well), particularly in ‘London-centric’ industries like theatre and film.

In spite of these reservations, I do, on the whole, find this report encouraging. In particular, its strong language around the responsibilities of government to ensure that artists are paid a fair wage is important. I hope that, regardless of which party is in power, politicians will take this recommendation to heart.

As we approach yet another election here in the next few months, let’s have a conversation about this report (and others like it), and work together to lobby our politicians for diverse, equal, and ultimately just arts policies.