Lemn Sissay took the stage at The Black Box to perform a dramatic reading of his acclaimed one man play, “Something Dark”. No set, no director, no props, just the audience scattered around the glow of candles on tables and the steady beam of Sissay’s voice.

Having no familiarity with Sissay’s work, I was without reference or expectation. It may be the case that some people think the act is worn, unevolving; I have heard that said and there’s plenty of Sissay’s material on YouTube, (my one, albeit pretty substantial, reference point), which seems to offer similar and in some cases the exact territory offered here.

There is, however, something disturbingly attractive about the material; a harrowing tale of discrimination, of neglect, of mismanagement, of life in care and if anything stories of life in care mustn’t be allowed to age out or be shelved in the archives.

Something Dark has the capacity, in my view, to connect time and again with new audiences, and I suspect, the capacity to be revisited by those already familiar.

You certainly don’t have to have been a foster child, in care, abused, or discriminated against to feel the emotion and empathy of Something Dark, because the darkness and light shared is relatable to many personal journeys. 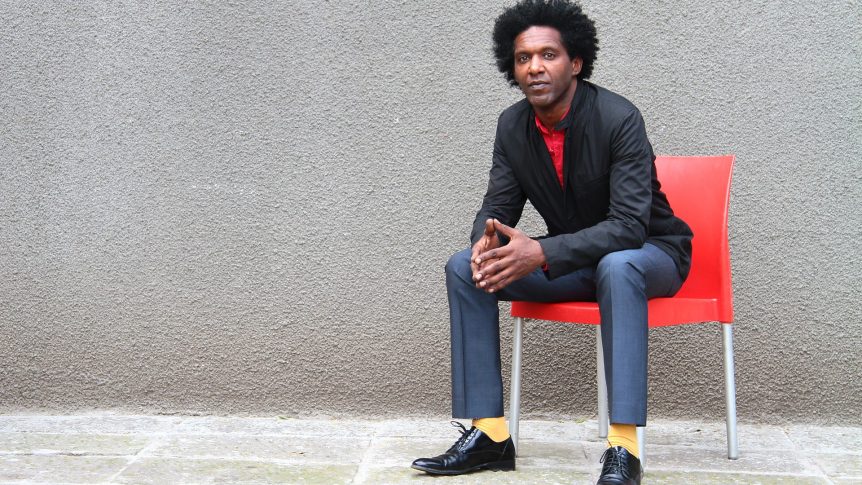 Perched three feet above his audience, overlooking an overwhelming majority of female attendees, Lemn seemed to hover in the space like a phoenix. The material and the performance radiated intimacy and pain.

Sissay starts casually, a story of the poetic taxi driver that drove him from the airport. Then the monologue begins, and immediately the initial poems drag his life under a black ocean where all one can do is hold your breath. Then suddenly the material attempts to drag the listener to the surface.

You are hiding behind the wall with him, kneeling next to him while he prays for deliverance from Satan, following him on his last goodbye from his foster family, walking barefoot in the snow. Following 8 year old Norman justifying and reasoning why he would say of his abusers “and I loved them!” And later, the declaration of a new name, a new city, the feasts of culture, education, and love.

Not quite redemption, not quite closure; many questions answered and some left unresolved. For him a hideous journey, for audiences, I would suggest, an adventure with many rewards.

On a personal note, perhaps I’m so late on the scene that I have nothing to add as a reviewer, but discovering Something Dark sparked such emotion in me that I could see myself repeating this journey again and again; like listening to a favourite song. Very impressive.