The central premise of Conor McPherson’s The Weir is this, all of us are haunted; some by regrets of actions taken, or not taken, some by lovers lost or given up and some simply by missed chances. Each of us has a ghost in our past, whether we feel their presence every day or we seldom think of them depends on the magnitude of those ghosts and the stories that we tell regarding them.

The vehicle for this premise, the setting of the play, is simple; five people meet in a small County Leitrim pub on a cold, windy day. Each of the five characters is haunted by spectres of the past, many of which are slight and trivial, but others are heartrending and life changing.

The characters drift, one by one, into the pub, each settling into distinct roles; Jack the boisterous, jovial mechanic, Jim the shrinking jack-of-all-trades, Finbar the big-headed businessman, Valerie, the new arrival from the city and Brendan as the distant, kindly barman.

The characters begin to break from these moulds as they, particularly Jack and Finbar, attempt to impress Valerie with stories of local knowledge and folklore. But as time passes, things take a turn for the supernatural. It from this point that the performances truly shine as the characters delve further into these stories, they reveal their vulnerabilities, their fears and ultimately the ghosts which haunt them.

Jack and Finbar, excellently played by Marty Maguire and Garret Keogh respectively, engage in witty, funny and sometimes unsettling discussion when it comes time to deliver their stories to the audiences in both the pub, and the theatre. Finbar’s repeated proclamation that it’s “all an auld con” is balanced with the genuine fear that Garret Keogh brings across during his rendering of Finbar’s story.

Jim, played by Frankie McCafferty, who’s haunting spectre is very real both in his tale, and in his life, in the form of his ageing mother with whom he still lives. The stories get more and more shocking, supernatural but, strangely, more real as the night goes on.

Valerie, portrayed by Kerri Quinn, provides a story which is both horrific and horrifically poignant. Her ghosts are very real, and she admits this is something that she contends with every day, like a shadow her ghosts accompany her everywhere.

Kerri Quinn brings across the emotions that her character would feel in a genuinely moving and engaging way, keeping the audience enraptured during her entire performance. A feat which is similarly matched by Marty Maguire during the final act of the play, when Jack drops his guard, revealing the phantoms which surround him to this very day. 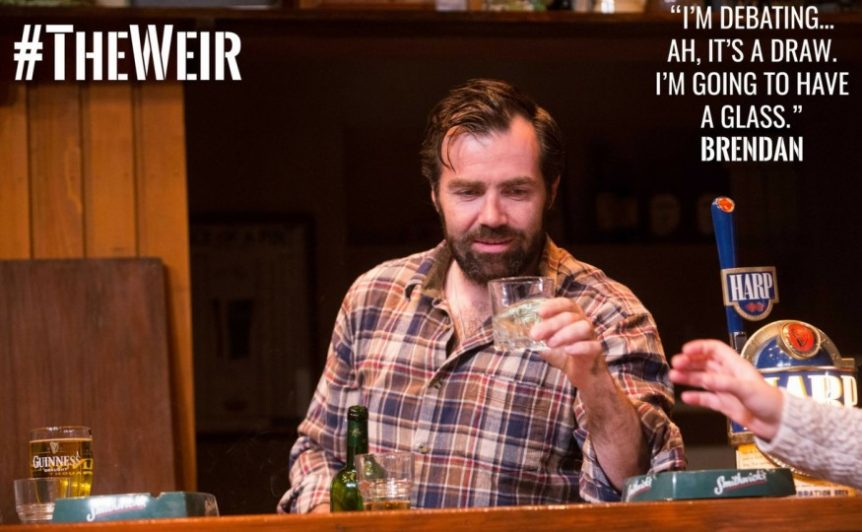 Brendan, portrayed by Patrick Ryan, who comes across as warm and welcoming appears also to be distant and unwilling to commit. His sisters have come to visit, but he does not want to see them, he feels tied to this place but wishes to move on yet is unable to.

Even his choice of drink repeatedly comes down to a “debate”. This is a man paralysed by indecision, not wishing to stay in his current state but unwilling to move on.

It is touches like this which allow the characters to feel real and alive, portraying the preference of the quiet misery of certainty and stagnation over the petrifying risk of change.

The acting is accompanied by excellent stage direction and lighting. The casting of ghostly shadows over unoccupied chairs, the dim glow of the filament lamps and peat burning fire gives the impression that there are more than our five pub-goers in this place tonight.

This is a play and a performance that is moving, funny and sad and it makes one wonder on the stories behind lives, what shaped them and what haunts them. In McPherson’s view, we are all haunted, but, as the characters show, it is how we deal with our phantoms that truly shapes lives.