What inspired you to take up the art of stand-up comedy?

I was always interested in comedy as far back as I can remember. I naturally gravitated towards things that I considered funny. I don’t have a perfect explanation for that. I can’t say definitively why comedy. I was interested as a child in clowns and clowning.

I was, I think, quite fearful of standing in front of audiences but when I could find an opportunity, and at school the school debates were one avenue that I could take advantage of, during those I would attempt to be humorous. I wasn’t necessarily someone who craved attention, but there was always an element of a performer in me.

Were there any key moments that stand out which lead to you deciding to become a comedian?

I do know that one of the key moments for me gravitating towards stand-up, actually wanting to be a stand-up comedian, was seeing Sean Hughes. Either his ground-breaking TV show, Sean’s Show, or his stand-up act; his work certainly affected me deeply.

He developed the method, as far as I could see, of using narrative as the orientation for the delivery of ideas and the delivery ultimately of jokes, although they weren’t necessarily jokes in the normal understanding of what a joke was.

You would see a lot of that narrative based performance in Edinburgh (The Edinburgh Comedy and Fringe Festivals) today, but when Sean Hughes arrived it was new and different and I thought it was really exciting.

What was it about that approach that encouraged you?

As far as I can remember I have always been attracted to the idea of spending an hour in someone’s company investigating interesting ideas in a funny way. I like the idea of using comedy as a tool to investigate ideas, and Sean Hughes to me pioneered that idea.

Another element of Sean Hughes work that I related to was the question of being introverted. I felt quite introverted as a teenager and he seemed to dissect that way of being, that feeling. I related very much to that.

A close comparison musically might be Morrissey and The Smiths, and I felt that this made me think that certain approaches were allowed. That it wasn’t just about the joke. That there could be ideas behind the joke, and that you could expand what it meant to tell jokes. And thinking like that is incredibly important for the development of comedy and for my development as well.

I know now that there was a lot of Garry Shandling (a US comedian whose pioneering work on The Garry Shandling show in the 1980’s led to a new era of situation comedy – Roseanne, Seinfeld and later The Larry Sanders Show and Larry David’s Curb your Enthusiasm) in Sean Hughes work, but nevertheless, it was pioneering for me and so I think I can say that that was a direct inspiration for my wanting to be, and then gravitating towards being, a stand-up comedian through being exposed to Sean Hughes.

So how did you go from being interested in comedy, to being inspired by comedians, to preparing material and then performing?

In my teenage years I became a comedy nerd (At The Monthly we prefer the term Aficionado) and started to read magazines; there was a magazine called Deadpan, and there were review magazines, I watched performers like Lee and Herring, David Baddiel, Armando Iannucci, Chris Morris, Rob Newman, it was the period of “Comedy is the new Rock and Roll” so there was plenty to observe at that point.

Did you go to see comedy locally?

It was the beginning of the Peace Process here, but living in Larne as a teenager there was nowhere to go to see comedians and nowhere to go if you wanted to perform; no comedy clubs, no open mic nights, no avenues at all to go to learn the craft so to speak, and I was too young to go elsewhere to perform because I couldn’t go to pubs or clubs.

At eighteen I went to Queens University. I hadn’t really done any performing other than the school debates, but now I was able to go to the Queens Comedy Club, I would go the Empire, I saw events hosted by Colin Murphy, and it felt really exciting. It was a time when I could really explore what interested me.

Is that the time when you started to perform?

Yes. I knew from school debates that I could write material and I could get laughs. I had some idea that I could do something that resembled comedy. There was a competition which I can’t remember the name of but it was connected to the network of comedy clubs around the UK and Queens was part of that network, so I sort of felt that now or never moment and I phoned up and booked a spot and I had two weeks to work on material.

I didn’t go to lectures, I spent all my time working on a set. On the day of the performance, I turned up at 6pm, hours before I was to go on. I was unbelievably nervous. I hadn’t told anyone that I was going to do it apart from two friends.

And at that point I thought I can’t do as badly as that guy. I did my set and it went brilliantly. I had applause, people really reacted well to it. Colin Murphy gave me the impression that he thought it had gone really well, and I was asked to do the Empire two weeks later. So it went as well as any first performance could have gone.

Then I performed at The Empire two weeks later and I died. It was, to put it bluntly, humiliating.

So what happens then?

Well there wasn’t anywhere to go really. You had The Empire which is a big room and nowhere really in between.

The Empire, that was a baptism of fire, because it held 150-200 people and even if you were really good you needed to work hard to do well there and even if you did do well you would only really get to perform there every few months.

That meant that if you wanted to perform and I did, you had to look at other events. At that time, there were a lot of poetry events, open mic nights, and so I would write some poetry and go along to them, mainly Café Arcadia, Bookfinders, there may have been a few other open mics, and I would perform at those events.

It seems like it was very difficult to find spaces to develop as a comedian?

Yes definitely. At one point I nearly moved to Birmingham specifically to work on my own comedy, but eventually I did my PHD. The Politics of Happiness it was called. It might have been a difficult period for me academically but I did learn a lot from working on the PHD.

There was a whole section within it on the question of failure. And the lesson from that was that it was okay to fail. That you can survive failure. And that brings me back to stand-up comedy.

And I have been working on my stand up ever since. 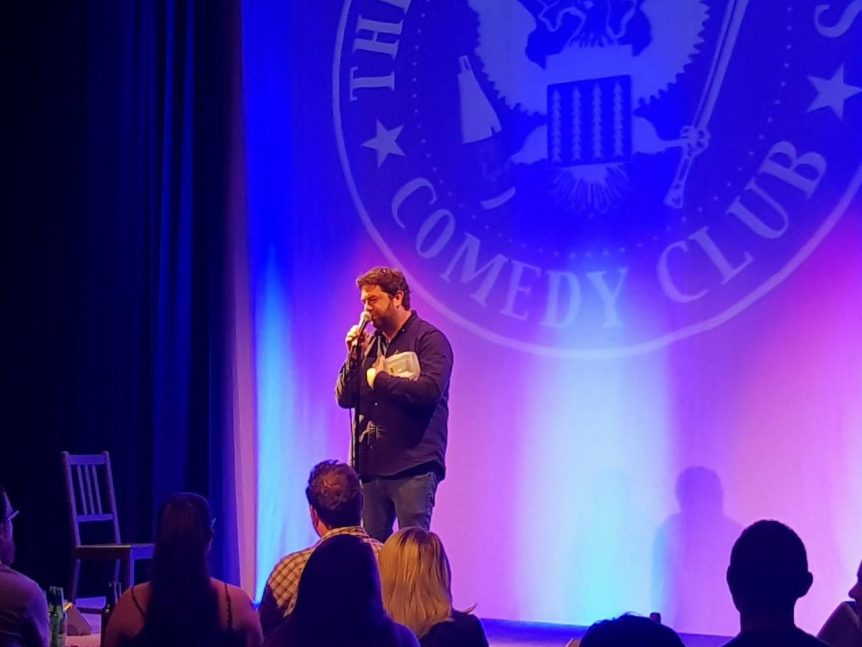 Graeme Watson is one of Belfast’s pioneering comedy producers and promoters, and has been instrumental in developing new acts as writers and performers since 2008. Cutting his teeth as a promoter and performer by running an open mic night at the Pavilion Bar, Graeme has been producing original live comedy formats at the Black Box since 2010, was a co-founder and programmer of the Belfast Comedy Festival (2012-2016), and is now the director of the annual Comedy Lab summer season in the Cathedral Quarter each July. He also worked with BBC Radio Ulster to develop the award-winning “Live at the Sunflower” stand-up show in 2015. He has his own promotions company, The Infinite Jest, which runs events and showcases local comedians.

Part 2 can be read here