Part 1 of this interview can be found here

Could you explain the thinking behind your latest project, “Abandoned; not Forgotten?”

Through Phase II of the Project, Abandoned; Not Forgotten?, I am promoting Northern Ireland and Ireland’s shared future (particularly relevant with Brexit and the UK preparing to leave the European Union) and the cultural equality of the Ulster Scots and Irish heritage and global peace to the Diasporas in the UK and on an international stage.

The question I asked myself in order to create the collection was, ‘Have we forgotten the culture and heritage that unites us in Northern Ireland and Ireland, for the sake of the politics that divide us?’

I wanted to produce a photographic collection which, when exhibited, left the question open to personal interpretation by the viewer and also one which stayed away from any political focus. I chose County Donegal, Ireland, as my muse for this body of work, as it is geographically in the North, but under the jurisdiction of the South, thus representing both sides of the border and political divide within Ireland. The abandoned houses, which had been left by Irish and Ulster Scots ancestors in lieu of opportunities of a better life overseas or for shear survival during past centuries (also reflect the current situations which have led to a widespread migration from Palestine and Syria and Afghanistan) were depicted as a photo essay of the heritage and culture of the isle.

On returning from Donegal, I approached the curators of The Engine Room Gallery and Artcetera Studio and was offered solo shows with both venues during that one morning. I was really humbled by this. It was then I decided I would like to draw on the talents of artists from other genre to come on board and exhibit as part of Abandoned; Not Forgotten? to broaden the horizons of this stage of the project and incorporate the language and music of the Irish and Ulster Scots cultures I was trying to encapsulate.

I approached artists I felt had like-minded views on promoting peace and a shared future for all, to use their own specialities to each create a body of work.

Composer, Marie Therese Davis, poet Jim Johnston and filmmaker Paul Whittaker all created their own original pieces in answer to the question, ‘Have we forgotten the culture and heritage that unites us in Northern Ireland and Ireland, for the sake of the politics that divide us?’ All 3 artists answered with a resounding “no”. 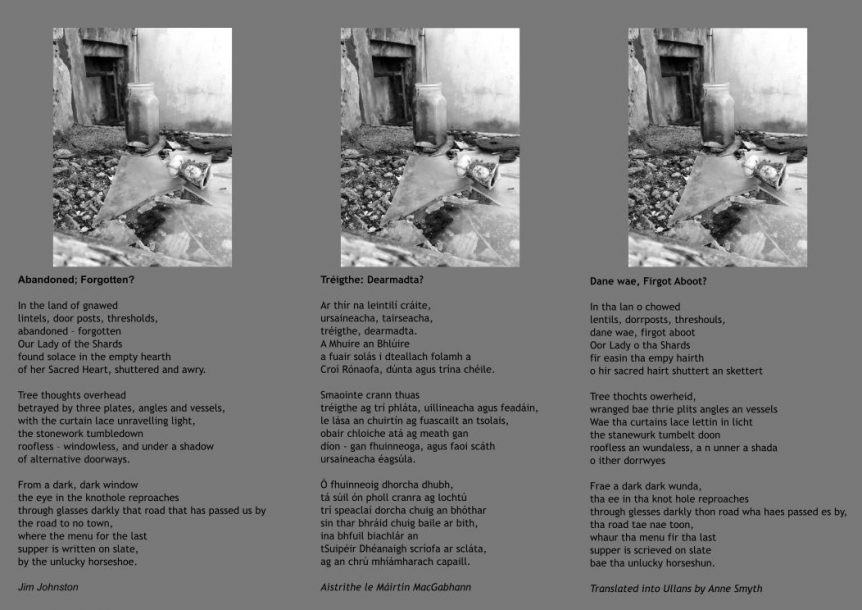 Now completed and already widely exhibited; my aim is to have Abandoned; Not Forgotten? hosted throughout Ireland (North and South), the UK, USA and other countries during this iconic 20th anniversary year of The Good Friday Agreement.

I have exhibitions booked until May 2019 in Northern Ireland. MLA Chris Lyttle has sponsored the collection coming to The Long Gallery, Parliament Buildings, Stormont, Belfast, in March/April; Dublin’s Lord Mayor, Mícheál Mac Donncha has supported a hosting at The Atrium Gallery, Civic Offices, (Dublin City Council’s headquarters) during April.

I am currently working with Tourism Ireland and NI Bureau in New York in relation to a potential exhibition in the States and I am hoping to secure venues in London too. The British Council has also kindly agreed to support me in my bid to secure venues on the international stage.

So you are questioning the impact of the Peace Process?

Yes, like many other people here, I definitely have asked myself this question, and I tend to be able to answer it straight away. The Peace Process here has made a huge impact, not only in the everyday lives of Northern Irish people (who are now able to walk the streets without fear of attack etc); but also on the economy, the tourist trade and business influx into the Province. I also started asking others, not just immediate questions, but deeper questions.

Was there a point in history where we all people here, North and South of the Border, shared a connection and lived as a community not split by a political divide, and if so can we look at the possibility of a shared future with confidence?

I was worried that Brexit and leaving the EU might open up old wounds and so again I was thinking that the peace process here could be affected because of this. I wanted to add the little weight I have to promote the idea of a shared future North and South of the border. I asked myself, “How do I create a visual element to these questions photographically.”

It was then I decided to do some field work. Firstly I took myself to Donegal, it is in the northern region of the island but governed by the South. As a time period for my research, I decided to focus on the 1840 and the Great Famine of Ireland. I wanted to move away from the history of the cities, Belfast and Dublin, to a more rural setting. In my mind, this created images of people struggling together just to survive throughout the whole island, politics was not the main focus on life’s agenda for the masses at that time. I also wanted to situate the work on the whole of the island of Ireland, focusing on the poor masses of the island who were most affected by The Famine.

I photographed abandoned houses, similar to those where the working classes during the early 19th century would have lived, and began to photograph them. My aim; to evoke a mind stream in the viewer’s imagination of remembering how Catholics and Protestants on the whole isle worked side-by-side and supported one another before, then died in their thousands together during the Famine. My question to the viewer was; could we one day return to a shared space were religion and politics were no longer reasons to hate or distrust you neighbour – whether that be here in Northern Ireland/ Ireland of on an international level?

You have a lot of support from local politicians?

Yes; so many of our politicians have come to see the exhibition The project’s ethos of cultural equality, shared future and global peace has gained support and endorsement from across the political parties in the Northern Ireland Assembly and beyond.

The Chief Executive of the Arts Council for Northern Ireland, Roisin McDonough and former Joint Secretary of the British Irish Secretariat, Ruairi De Burca are among the high profile clients who have purchased pieces from my ABANDONED; NOT FORGOTTEN? photographic collection.

Mairtin O Mulleoir and Councillor Chris McGimpsey have also helped me in my bid to take the project to the States. Even actor James Nesbitt gave his support when I told him about this shared future and global peace project at the ISBE conference at the Waterfront Hall a few months back.

With Phase III; I am looking for funding to ensure that the final phase gets as close to completion as possible. At this point the phasing of the project has worked extremely well and completing the project as I originally envisaged is very close at hand.

If I am able to go to the States, I would like to work further with the NI Bureau, and hopefully with the British Council too, in my bid to join forces with the Irish Diasporas therein and promote Northern Ireland and Ireland’s shared future and the cultural equality of the Ulster Scots and Irish heritage, global peace and a shared future. Taking this as a starting point, I would then like to join forces with the Diasporas across the world and hopefully keep the ethos of the project alive in those who are touched by it and also future generations who may take it forward.