How did you become a comedian?

I don’t think I became a comedian. I think in some ways I always was a comedian thinly disguised as a law-abiding citizen with a perpetual smirk.

When I got married, for example, instead of doing a ‘speech’, I showed a pre-recorded DVD to the guests where I had interviewed my husband’s family, friends, his boss, to see whether or not I’d made the right decision.  It was entirely scripted and was a great laugh.

I think the comedic side of my personality was pushed to the fore when I became a mum and I found that trying to ‘be’ a mum was totally hilarious and not what I expected.  So that’s where it all began.

It’s also worth noting I am a social worker and doing stand-up is a great way of re balancing my life.

Did you have an interest in comedy? Did you watch comedy on TV or go to comedy clubs?

I did watch comedy when I lived in Australia. Comedy shows like Fast Forward or Kath and Kim and many other shows that were on Australian television. With regards comedians I liked Bill Hicks.

I didn’t go to comedy clubs very often but I did go to a club in New York and I didn’t find what was on offer very inspiring. If anything I found most of the comedy there quite crude.

Where and when was your first performance?

One day in April 2013 I found myself in a serious work meeting trying to help plan a Social Work Awards event and they wanted some fresh ideas. Before I’d given any thought to it I offered to do some stand-up comedy.

I had never – and I mean never – done stand-up before, not even open mic events.

My suggestion was kindly rejected but I thought I’d give it a try anyway as I’d already been conjuring up some material. So, I hired a venue, printed a pile of leaflets and gave myself 5 months to come up with a one-woman show.

All 120 tickets sold within the first few weeks so there was no backing out of it.

I did that first show at Daly’s Comedy Club in Omagh on Friday 13th September that year and had deliberately chosen the date just in case it was a disaster.

My show was called, “Stand Up for Social Workers!” and was meant to be a one-off night of silliness but after the performance I had social workers in Belfast ask whether I would go there and similarly, Enniskillen and Derry. 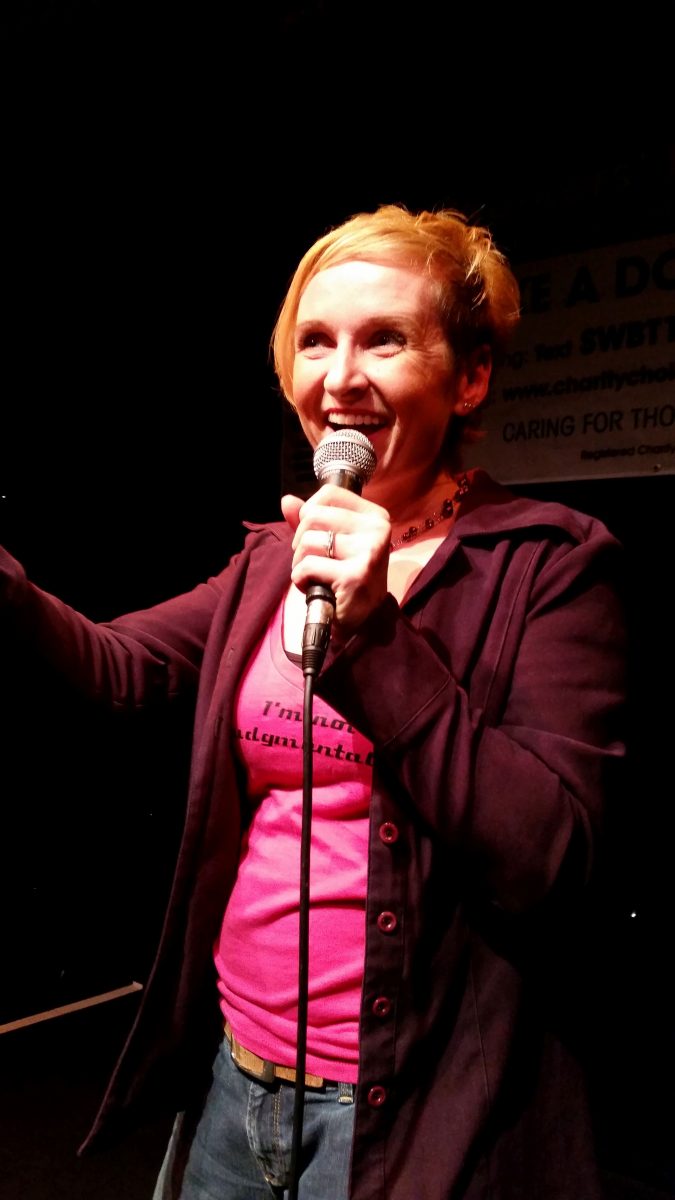 That seems a very brave thing to do. You must have been very confident that you would be able to perform?

Not really. I couldn’t say that I am a very confident person.

I grew up as a “looked after” child. I lived with foster parents and in care homes. I had been told or it was inferred that my prospects were quite poor and that I may end up in jail or worse, that kids in care are very likely to get pregnant young and have their kids taken off them too.

I was told by my own social worker, that while I could do little about my past I could make every effort to determine a better future for myself.

With that in mind I find that too often people I talk to don’t take risks because of the fear that things will not work out well.

I would rather look at the possibility that something good will come out of taking a risk.

And really, what was the worst that could happen? Perhaps the comedy night didn’t work and I wasn’t able to deliver a set of material. Then at the very least I’d given it a go.

I would say to anyone thinking about comedy, or any other art form. Give it a go. Something good will come out of taking the risk.

How did you go about the process of writing material and then preparing it for performance?

I spend a lot of time driving and this gives me a lot of thinking time. I am also very busy with my family, my job, I am a social worker which is a very challenging sector to work in, not because of the people we work with, but the system can be so oppressive and services are so restricted which can make your working life very difficult, and beyond all that I study as well.

I tend then, to work on material when the opportunity presents itself and more often than not, that is in the car. I do spend a lot of time talking to myself in the car, testing out material and after that giving it a go on stage. Sometimes it works and sometimes it doesn’t and that’s all part of the learning.

I am always looking for contradictions. Whether that is in my experiences at work or my experiences at home with my children. I do quite a lot of material exploring the question of children and your relationship with them as a mother.

Not long after my first performance I met Jim McGrath, a fellow comedian and Social Worker and we teamed up.

What started out as a one-off became a four-year tour of the UK where we performed in over 25 cities.  We are touring again this year in November and December in England, Scotland and Wales with our new show.

I have also performed as an opener and headliner at various clubs in Northern Ireland and I have performed across the UK at corporate events.  It kind of just took off and I have met some amazing people along the way. 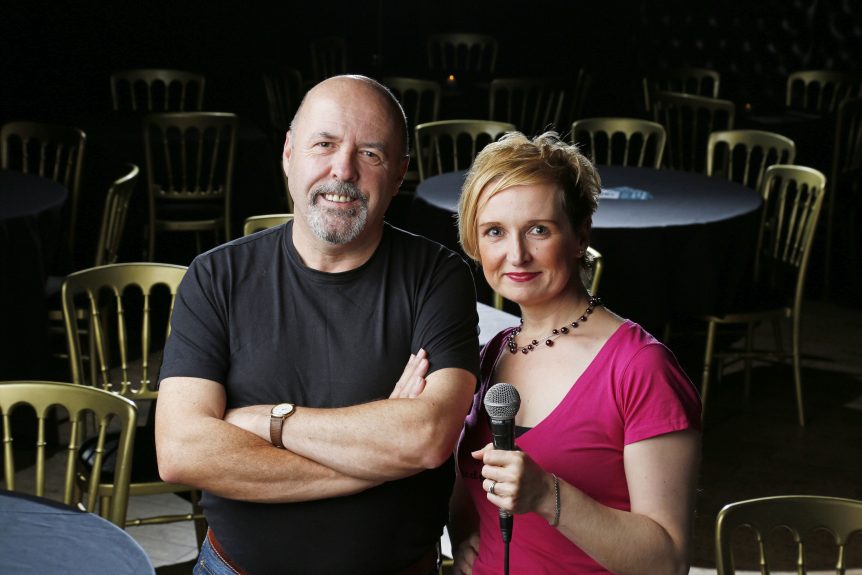 You are originally from Australia and you said that you grew up watching comedy on TV there; have you found any difficulties getting your material across to Northern Irish audiences?

No, I don’t think so. There’s a lot in my set that focuses on moving to Northern Ireland and being completely baffled for months. I won’t give much away but it does tend to go down very well, simply pointing out some of the peculiarities that are taken for granted if you were raised here.

How do you reshape the material drawn from your own experiences and get it ready for a performance?

It very much depends on what the gig is and the audience that I have to perform to.

I do have an attitude to each performance and that is that I prepare as comprehensively as possible, I take my performance very seriously and I intend to give it everything once I take the stage.

I do see people get on stage poorly prepared, with material that isn’t fully ready for delivery, or they haven’t thought through the delivery of their routine.

I also think that once you get on stage, with comedy, you have to prepare the audience, find some element of “likeability” that you can allow them to tap into so that they will listen to what you have to say.

Having said that I do work with material which can be hard hitting. As a comedian it is hard work to strike the many balances in your material that will engage the audience.

Do you find yourself in a tiny minority of woman comedians in Northern Ireland?

Yes it’s certainly a small group and that’s reflective of the industry as a whole but that shouldn’t stop women from giving it a go.  The more women that take the risk the better the situation will become.

I’ve been taking it a bit easier the last year as I was trying to juggle family, work, study and comedy but this year I plan to get back out there and will be touring later on in the year.