Based in the ancient ecclesiastical seat of Ireland is St Catherine’s College, Armagh, built on a little hill, within calling distance of the bells from two Cathedrals.  The first church was built on Willow Ridge Hill by St. Patrick, and the other church was built after a vision he had on the opposite hill. Poets have long drawn inspiration from these landmarks including, the late John Hewitt, who wrote;

You say Armagh, and I see the hill

With the two tall spires or the square low tower;

The faith of Patrick is with us still;

His blessing falls in a moonlight hour,

When the apple orchards are all in flower.

I decided to use the Cathedrals and the themes they represent; beginnings, endings, gatherings and celebrations as a basis for my workshops.  All school poetry workshops organised by Jan Carson, and Conor Shields, for Community Arts Partnership, Poetry in Motion Project, begin with an excellent training session in the ARC building, Belfast, where CAP is based.  The afternoon provides facilitators with a guide to good practice and facilitation techniques as well as giving them an opportunity to share and discuss their previous experiences working on the project.

Following training, I was introduced to the lovely Kerry Nesbitt, teacher of St. Catherine’s School whose class I would be facilitating. The first workshop began by explaining the technicalities involved in writing poetry and the four main stages of poetry construction. We then commenced our short walk to St. Patrick’s Catholic Cathedral, and along the way, using my tour guiding experience; I gave the students a talk on the history of the area.  In the beautiful settings of the Cathedral the students began to write down ideas and words.  Back in the school’s Seamus Heaney Library, and sipping hot chocolate the students began to work on their drafts.

The second workshop started with students reading out their drafts and on a spider chart we discussed how they could be improved, namely by adding context and the familiar. The drafts were again reworked before we headed out with umbrellas into the torrential rain of a dark October day.   Again, I provided a history of the area before we arrived at the second cathedral, St Patrick’s Protestant Cathedral, where we were warmly welcomed by Cathedral Steward, Leigh Vage,  who showed us around the Cathedral including the crypt with its collection of  ancient stone ‘gods’. This further highlighted the rich mythology of the area and provided an opportunity for the students to explore their heritage and weave these stories into their poems.  The students had another opportunity to rework their drafts in the rich stillness inside the Cathedral.

The final workshop began with readings of draft poems followed by an in depth discussion of what the finished product should contain. Flip charts were again used and examples provided. The students were then given time to complete their final poems. 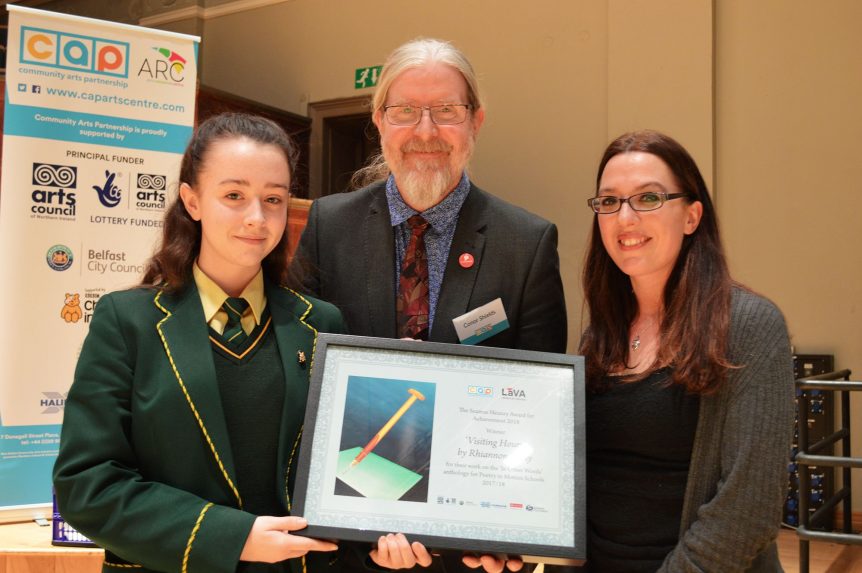 One student was deep in thought, so I removed her from a group table and placed her on her own in a quiet part of the library.   Ten mins later she was still mulling over her poem and on returning to Rhiannon, I could see something special emerging.  We talked about her poem and how omitting the relationship between her and Kate could improve the poem.  I asked her to be honest, to write simply and to write with truth.  She certainly did as her poem, The Visit, went on to win the 2018, Seamus Heaney Individual Award for Achievement.

Well done Rhiannon Reilly, and to all the students of St. Catherine’s College!