What does it mean to be a man in the 21st Century? This is a question that has pushed its way to the front of public consciousness in a variety of ways, most recently with the exposure of sexual predators in the film industry; the Harvey Weinstein and Kevin Spacey scandals, the response of the #MeToo campaign, and beyond that, questions of gender identity and the self-identification debate. These are but a few of the means by which this fluid and contentious issue is being explored.

In Questions of a Man, Dylan Quinn examines this matter through an interesting mix of monologue, dance, harsh truths and cartoonish vulgarity. It must be said, Quinn does not shrink from examining sexism ( one might say at its most “thrusting”), false machismo, gender stereotyping and the objectification of women.

From the outset of this performance the audience is forced into an uncomfortable frame of mind. A Dance, or rather a grasping, innuendo-laden mockery of a dance between Quinn and his stage partner Jenny Ecke opens proceedings. 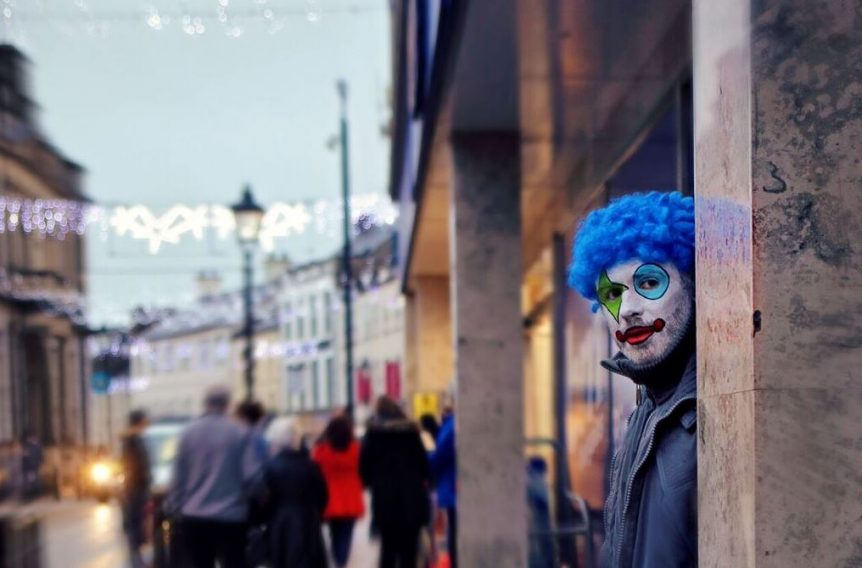 A dark recitation of the contemptuous song ‘Blurred Lines’ sees Quinn wearing clown make-up, dressed as a seven-foot penis, dancing wildly in the background. As one can possibly tell the approach to metaphor in this show is not subtle.

Through their enactments Quinn and Ecke make it clear that these themes should be met head on.

The zenith of this performance is the presentation of the central theme, the Question of a Man; why does this behaviour exist? Why is the objectification, the violence, the sexualised pop culture, the vulgarity and the myriad of other crude sexist behaviour now, finally, at this point in time, being questioned? This question is asked, not through words, but through performance.

A naked Quinn stands holding a mirror in almost total darkness. Shouts, screams, crowds of thugs bay for blood and violence, mocking, drunken laughter coming from all around. And, at the centre of it all, is a small, frightened, naked man, alone in the darkness.

The isolation that a modern man feels, the masks, and clownish make-up of masculinity that many wear for fear of the darkness and the thoughtless judgement of others is shown. The feeling that one must behave in a certain way to fit in to a culture that is harmful to them and those around them, is brought out in the closing section of this performance.

Quinn gives his reasons for making this show; his home life, his regrets over past behaviour and his hopes for the future. A fitting close to such an act, allowing the person beneath the mask to be seen, for a brief moment.

Questions of a Man takes each audience member on a journey which I suspect will be unique to them. For me while the questions asked were general, universal, there are elements which must impact on a purely subjective level; I would suggest that it might be almost impossible to see this show and not reflect on past actions or behaviour and wonder how people were affected or whether they were harmful, hurtful or dehumanising to others, or even to yourself.

Questions of a Man is not much for enjoyment or simply pure entertainment. But, with its no-holds-barred attitude towards its themes it is overall, thought-provoking, intelligent and engaging. It certainly didn’t offer an easy ride, and it might not be something for everyone, but see it anyway. There is much to be learned from insightful performances like this.

Michael McKinney is a Belfast based musician and theatre aficionado who writes regularly for The Monthly.