Home » The Monthly, This Is Me » Joanne Barnett – Project Co-ordinator for CAP’s “This is me” project speaks to The Monthly

When was your initial interest in the Arts developed?

My first artistic experience is probably not the fondest of memories.  I recall being in Primary School and being told my drawings were not good enough and constantly having to make use of the rubber…..so much so that I probably rubbed a few holes into my homework book.  However as I grew up and got further on in school, Art actually turned out to be my best subject and came up tops in my A-Level grades.  I loved being creative and using my hands. I also became very involved in the school plays and somehow over the years I turned from hiding behind others in shyness to performing as the green wicked witch in Macbeth.

In my teens I went to watch a few live television programmes and loved watching all the crew behind the scenes thinking that one day I would love to be doing something similar.  My interest in performing arts, creativity and tv production led me to study Media Studies in 2002 with specific focus on video production. 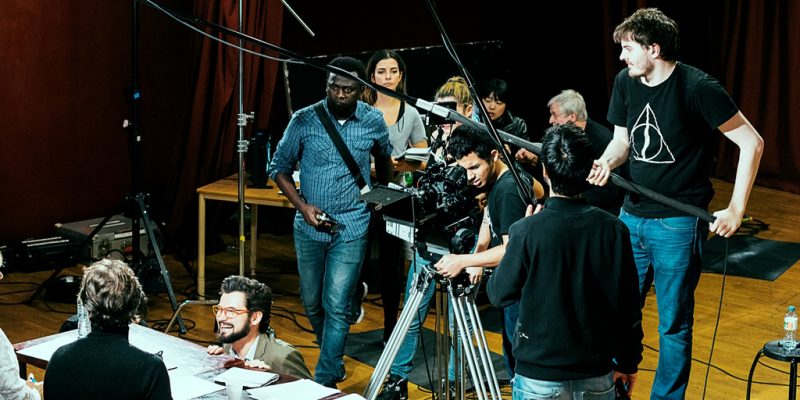 You studied Media Studies at University of Ulster – what came out of your university activities?

Following University I had a plan to go globetrotting before I got into a ‘proper career path’.  For about 9 months I saved money by working in a café and also doing some video editing for South American Mission Society (SAMS).

On my return from 8 months of travels word of my editing work for SAMS had spread a little and others were coming to me asking if I could make them a video. I decided to give this thing a go….’my proper career’ …..and in 2009 I set up officially as a business producing videos to help raise awareness of the work of these organisations.

My aim was to enable these types of community, Christian and charitable groups, access to video production that was affordable.  After much deliberation I called my business Slingshot Creations with the tagline ‘Making the Message go Further’.

When this kicked off it wasn’t full time hours so I looked for opportunities to freelance in other companies which has led to me working across a few arts organisations and juggling a busy but enjoyable schedule between BNL Productions, Community Arts Partnership, BFI Film Academy and my own Slingshot Creations.

Over the years I have expanded what I do with Slingshot Creations and also got much better equipment from the little tape camera I first bought in 2009.  Looking back at that is rather embarrassing but at that time 4K was not even an idea.

Now shooting in 4K!  I always had an interest in photography and have not got myself a lovely camera specifically for this and have started doing some photo shoot work and photo booths.

I love the diversity, meeting fabulous people and learning about what is going on across the North and South of Ireland in various community projects.  The hours can include evenings and weekends, be crazy one month and then quiet the next which is maybe not ideas however I would rather be doing something I love in weird hours than hating my 9-5!

For anyone interested in getting into film and photography although I have got much better equipment now than when I started I would say it doesn’t matter what camera you have – start snapping/filming.  It is the one way you will improve and learn.  An expensive camera doesn’t make you good – it’s a good eye for it and lots of practice.

How long have you worked for Community Arts Partnership?

I always had an interest in youth work and came across the opportunity to combine my video production and youth work skills in facilitating film-making and photography workshops for community groups in 2010 for a local media company BNL Productions.  It was exciting for me to see how the arts could be used to engage young people, enable discussion around sensitive issues and give them a voice.

Following this in 2013 I became aware of an opportunity within Community Arts Partnership to coordinate their digital arts project, “This is Me’.  I continued to see the impact that workshops had on people from all ages and backgrounds.

The Arts empower ALL people – it doesn’t matter who you are.

What do you aim to achieve with the projects you oversee?

The projects that I oversee in CAP involve all different kinds of people.  I love seeing people who think at the start that ‘I could never do that’ create a film, photo exhibition, animation or music piece that they are so proud of, that says to the world ‘This is Me’.  It is not about going in and making something great for the group to show off or put up in their centre but enabling them to create, to take the lead, to tell the story, to grow in confidence and skills, to build relationships and to be so proud of what they have achieved.

I want the groups to create something that has a lasting voice and also leave them with the skills and confidence to continue to create further.

Is there any particular piece of work that you are most proud of?

Across all the work that I am involved in it is hard to pick something specific.  Each piece of work is unique and has it’s own voice even if it uses the same digital form.  In Slingshot Creations I love seeing how a video comes together and being involved at each step with the client.  I don’t think I could sit day in and out editing or solely filming.  I love meeting with a client who maybe doesn’t know what exactly they want, helping them form their idea, creating a structure that incorporates the vision, possibly having hours of footage and then condensing this in to a video that impacts and tells their story in only few minutes.  At the core of it I love ‘Making the Message go Further.’