Paul Kane works at the Oh Yeah Centre and part of his job is working with people experiencing later stage dementia. He is also the driving force behind the Over the Hill Music Collective, an organisation which supports older musicians.

The monthly talks to Paul about his upcoming film project “Windmills” which will be launched at The Golden Thread Gallery in Belfast on Saturday 19th May starting at 1pm. 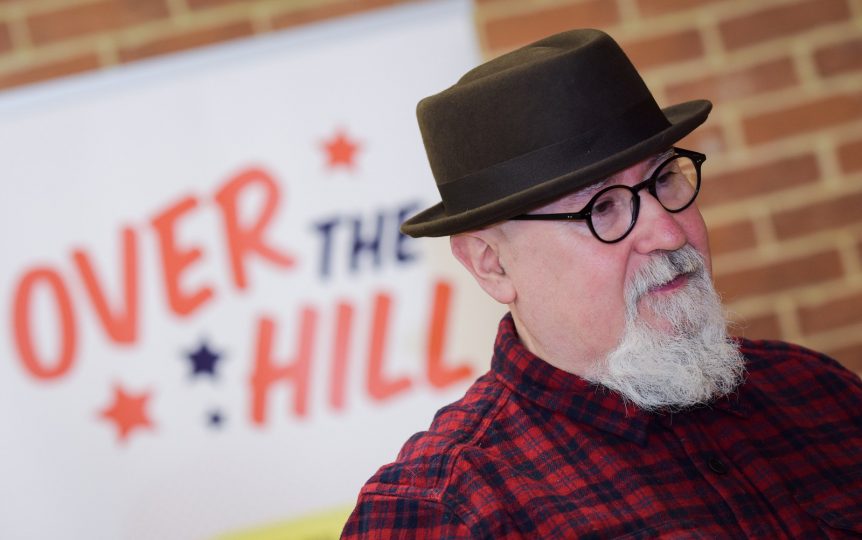 Firstly, is this project a continuation of your work with the Over the Hill Collective?

What is your starting point for this film?

I am very interested in memory and in all the work I do, I use memory based material to produce music and songs.

I became aware of a fund, the Artist Career Enhancement Scheme, that the Arts Council of Northern Ireland had available that would allow me to work with people experiencing dementia.

I had worked with a wonderful woman called Fiona McGettigan who is the activity coordinator for Belfast Trust and that relationship, as well as the relationships I had built up with people in residential care homes,  helped me organise the project that I wanted to pursue.

It is your view that music has a role to play in helping people who experience dementia?

I work with music from the past and I work on developing personal soundtracks which I hope will impact those people experiencing dementia and at best allow them a period where they and their memory are connected.

These moments are not always documented because often you are working with large groups of people, so you don’t always get a chance to concentrate on a smaller group, which I was able to do during this project.

Why does that matter; because the moments of lucidity brought about by the songs I play can be brief, you really do need smaller groups to be able to focus on those moments. I certainly thought that the experiences I had gained through my work and the responses to it suggested that these moments would be worth capturing.

So you wanted to capture those moments of lucidity that the musical activities were unearthing?

I’m not a clinician, I don’t necessarily have that type of expertise but I have experienced situations where people I have been working with have made connections because of information about a piece of music. I’ve also had feedback from carers and family members who tell me about how the musical experience affected their relatives or the people they are looking after.

In one situation, a person I was working with mentioned seeing Van Morrison sing the song Gloria. That stimulated a series of connections, someone else in the group remembered that they had seen Van Morrison, another person had heard the song Gloria at a particular time, and there was a period of lucid, coherent conversation. It was moments like that, that I wanted to capture.

I wanted to capture people singing, dancing, moving and talking. At the same time I also wanted to produce new music emerging out of this work.

You were also going to create new music through this project?

A lot of music I play in care homes is set at 85 BPM or close to a resting heartbeat. I wrote electronic music which matched the speed of those songs. I wanted the music to evoke a certain feeling and then when it was attached to the images allowed the film to speak for itself. It was also important for me to be creative through this project. Producing new music was a central part of the process.

So how did the film come about?

There were a couple of obstacles. I am not a film-maker so I partnered with Digital Arts Studios and a new film company, “Drawn in Pen” with a producer called Aaron and a sound engineer called Dermot.

We spent a lot of time sorting out the necessary paper work to get a film crew access to the care homes that we wanted to work in and we were able to get access to work with small groups to allow a more concentrated approach which we could then film.

When we watched the film the one thing that was interesting was that the interviewees didn’t appear to be experiencing a serious illness like dementia?

One of the things I was trying to achieve was to flip how people with dementia are viewed.

The film documents the process of the work that I do. It starts with me singing songs and it shows the process of people starting to tap their feet and their fingers. They even start singing along. Then people get up and move to the music. Some people start dancing, initially by themselves then later with partners. The film shows what I see regularly in my work.

But it also shows people talking, discussing their lives. This is very important because often the musical connection allows a pathway to other recollections. The cars people would drive, the clothes they wore, the people they met or knew. These were the minutes I wanted to capture.

If I understand you correctly, you are saying that music allows people experiencing dementia to make links between memory fragments?

Again I’m not a clinician and I have no medical training but I see time and time again certain responses to the workshops that we facilitate and so it’s not an accident.

It is clear to me that music stimulates people’s minds and offers periods where the effects of dementia are lessened slightly.

As I’ve already said, all the songs that I use which seem to work best are around 85 beats per minute; they are strong lyrically and almost always have strong choruses.

You have discovered some interesting things about how people remember songs?

Yes, I’m always intrigued by how memory works, as I’ve said, and one thing that struck me is that when you are working with music, songs and memory, you have to take into account how memory works.

Almost always, people remember a song in the original key in which it was sung. Doris Day sang in B flat. That is how people remember the song and they need to hear it in that key, and because my voice is naturally much lower than that I have had to learn to sing in different registers.

You produced new electronic music for the soundtrack of the film. How did that come about?

I worked with Johnny Woods, who was in a band called R51, as a co-producer of the soundtrack.

I was aiming to distil the elements of the songs we were using, but I also wanted to have a creative response to the work we were doing.

I wanted to challenge myself to respond artistically and so the music was a pathway to connect creatively and the music was created some time after the filming was done, so I was able to live with the film and think about it over time.

What about the future of your work?

From what I understand, the number of people experiencing dementia is increasing and is set to increase dramatically. My work is about alleviating some aspects of life with dementia and I would assume that I will continue to do that.

Obviously the songs change over time. People I’m working with now might ask for Tom Petty or music from the 70’s, whereas for a while there the music mainly came from the 1940’s and 1950’s.

But whatever the period the songs come from, and I spend a fair bit of time researching people’s individual musical soundtracks and then creating that soundtrack for the workshops, it is memory that we are working with and the aim is to unlock, for however long we can, people’s memories giving some respite from the effects of an illness like Dementia.