Can you remember what influenced you towards an interest in art?

My first memories are of my father’s drawings. My father was always drawing on spare bits of paper. Drawing, doodling, with a pencil, that was something he did continually and so I was always aware of drawings scattered around our house. He had no formal training, no education whatsoever, he didn’t consider himself an artist, but in my view he was very talented. You couldn’t tell him that, he wasn’t that kind of person, but everything he did had an impact on me. I was always finding wonderful pencil drawings in the house and that seeped into my DNA. When I went to school, particularly secondary school, I fell in love with art. I selected GCSE Art and then went on to do A Level Art. 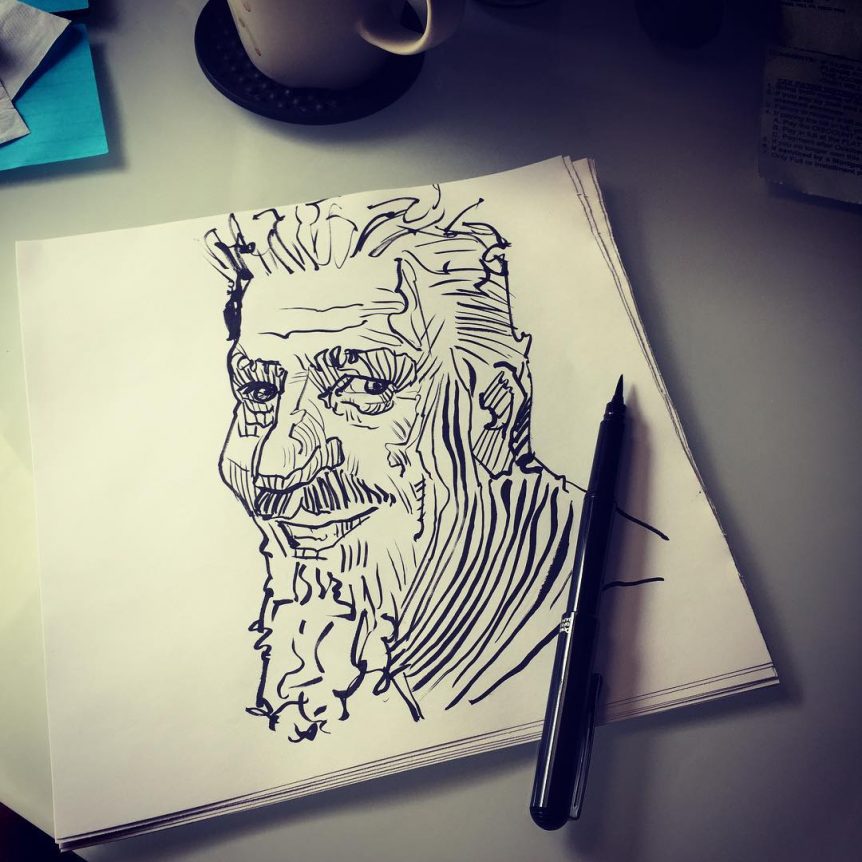 You took Art at school?

Yes, particularly in secondary school where I met one of the biggest inspirations in my life, my A-level Art teacher, Tony Whitehead. Tony had a wonderful attitude to teaching art. He encouraged everyone in the class to follow their own ideas at their own pace. He was never proscriptive and he loved experimentation. He always introduced us to new materials, we were able to develop quite a wide range of interests. His attitude, the way he taught, lit a fire inside of me, and that lead me to pursue art as a career.

I should say here that I do not consider that I have any innate talent for art. I can talk up my abilities but I really don’t think that I am a naturally gifted artist. Tony Whitehead’s approach allowed me gain the confidence to apply to Arts College, the University of Ulster at Jordanstown. Apart from wanting to live a bohemian lifestyle, move out of home, get a flat; I’d grown up in West Belfast where Republicanism was very much at the forefront of life and I wanted a chance to remove myself from that atmosphere, I was also committing to developing as an artist and the course was very much a continuation from the A level art course.

I also applied for a degree in Jewellery and Goldsmithing, and although my heart was never in that side of the arts, and I didn’t get a really good education; I can say that I had a fantastic time.

Did you manage to live a bohemian lifestyle?

It was a great time to be a student. Students still received grants, not loans; the university bars were very accessible and well subsidized, and there were all sorts of subcultures developing.

It was also one of the periods where “The Troubles” were at their height and my generation were very much a “voiceless generation”. If you were young you really weren’t listened to. That is the reason why there was such a vibrant Punk Rock movement, because music was one way of getting your voice heard.

While there were developments of all sorts of subcultures during that period, street art wasn’t really possible. You could organise music events and get places to play but going out with spray cans and a ladder late at night was not a viable option in those times. Street Art really couldn’t take off here until the peace process emerges.

What happens after your bohemian period?

I didn’t finish my degree. I left university and travelled. I worked with the World Wildlife Fund in Cameroon for 6 months. I was actually living in the jungle, sleeping in a hammock, meeting up with village elders, looking for particular species of animals, e.g. monkeys. 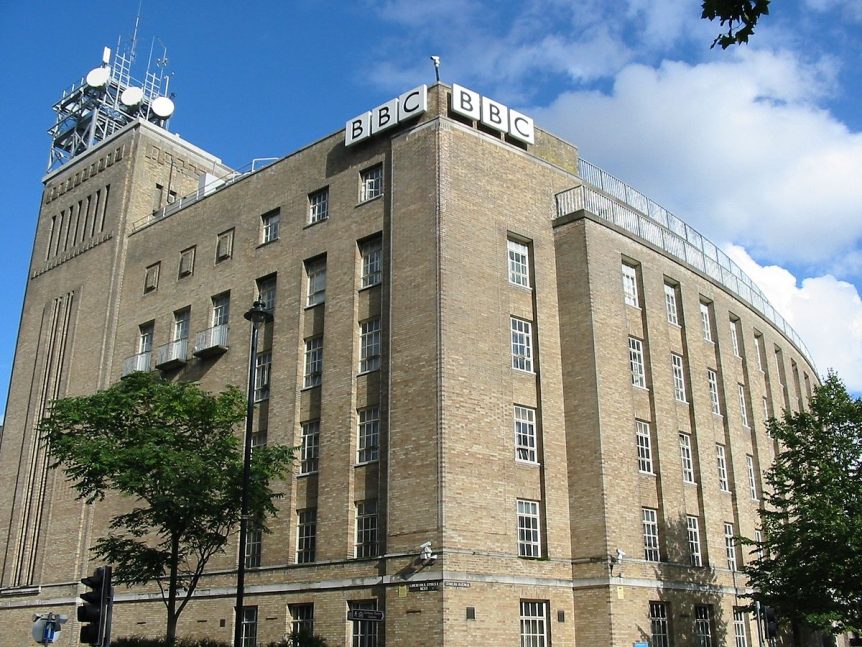 You worked for the BBC?

Yes. I was offered a full-time job there and I worked at the BBC for nearly 8 years. Even though I was working, I always had a sketch book, I was always drawing and eventually I decided that I really needed to work creatively.

I started to work on a genre of art called “Subvertising”. I would go out late at night and paste speech bubbles on huge outdoor adverts. I was actually doing this while I was working at the BBC. The big thing for me was any advertising which used women or women’s bodies to sell their products. That just didn’t sit well with me, possible out of respect for my mother, I’m not really sure, but whatever drove me to do that, I went out at night and pasted giant speech bubbles on to bill board advertisements.

What were you trying to achieve?

I did actually work in broadcasting in the BBC and occasionally presented music shows playing electronica and samples. I had a show on community radio around the time of the Good Friday Agreement called Ulster Says Yo and was writing articles on youth culture for DV8 magazine.

At night, I was doing the subvertising and really I was thinking that I wanted to create something which would impact people, which would get my name out into the world. Eventually I left the BBC because I was very frustrated and I wanted to work as a creative artist. I also started to get interested in Street Art.

There wasn’t a huge street art scene at that time, the odd tagger or graffiti artist, and I started to gravitate towards using spray cans in my work and from there I moved towards producing larger art works for my business. 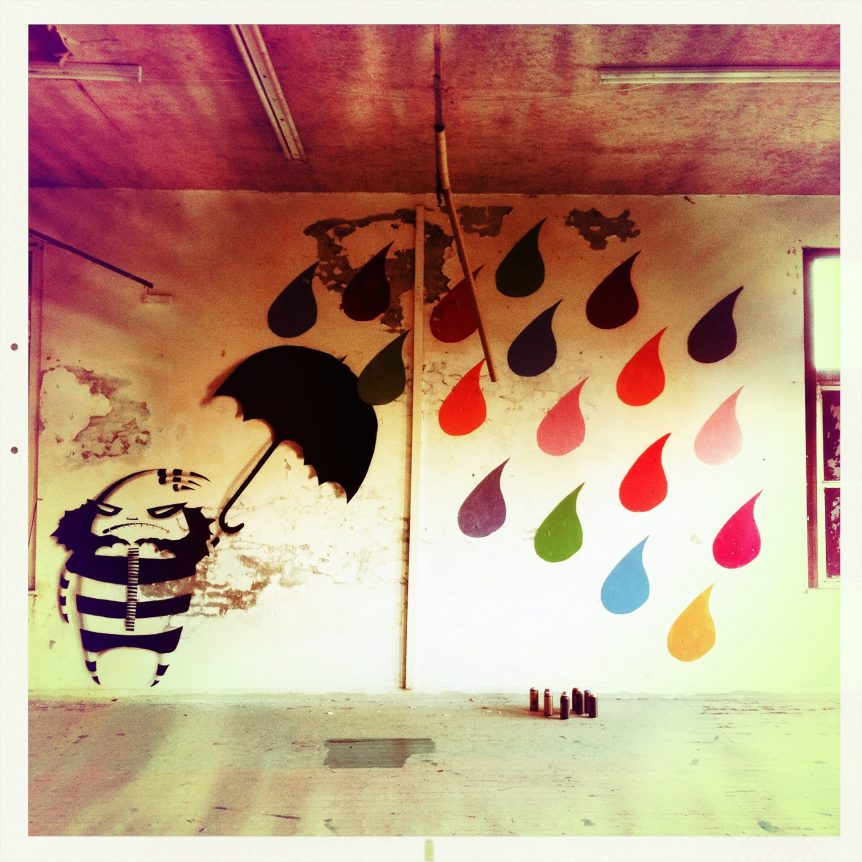 I had set up my own business by this stage and I was doing a lot of work in the community, I was learning community arts skills, working with people from disadvantaged backgrounds, people with disabilities, young people, hard to reach people and I was learning all the time as well as working in every conceivable art form, and through that I moved towards spray can art works. 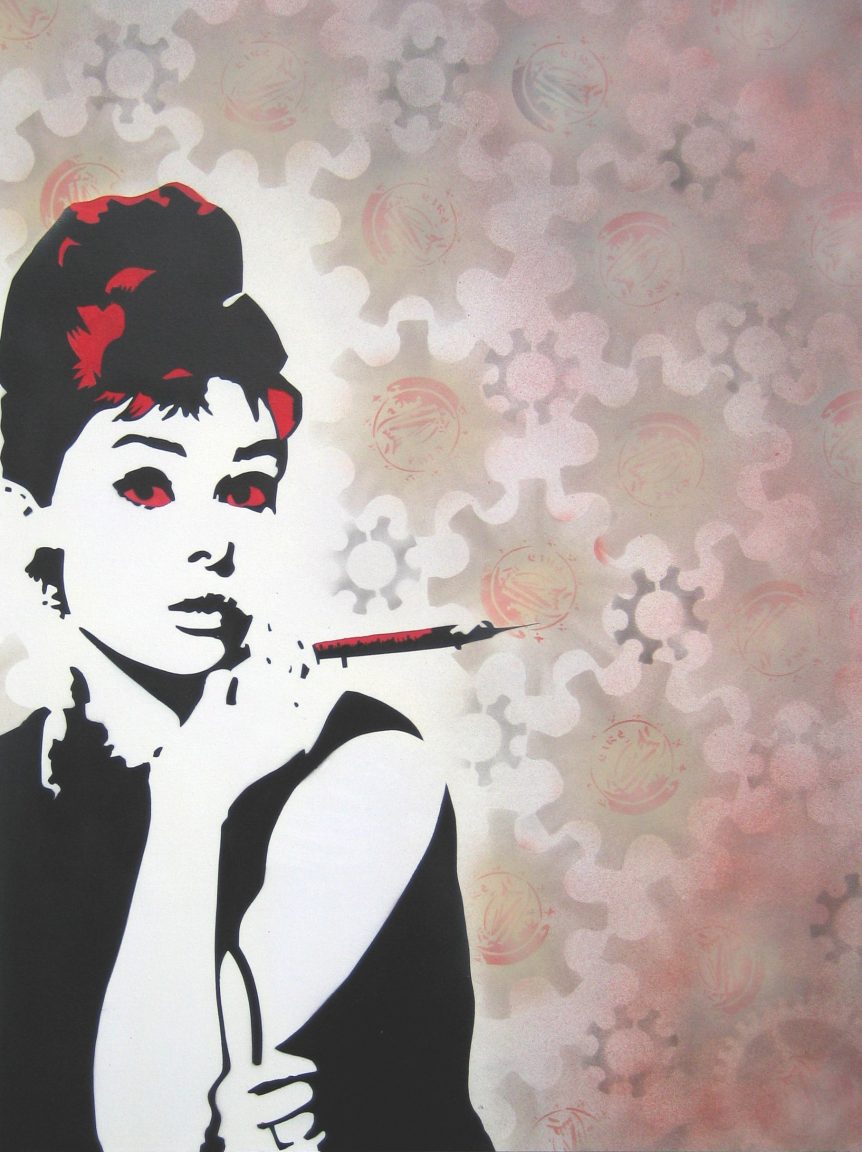 The second part of this interview can be found here
ShareTweet