Those familiar with the comedic approach of Tony Law will be accustomed to the post-modern absurdity he is capable of producing. To those in the audience who may have been unfamiliar, the eclectic dress sense of this zany wild-eyed Canadian – by way of London, England – gives a strong indication of what is to follow. 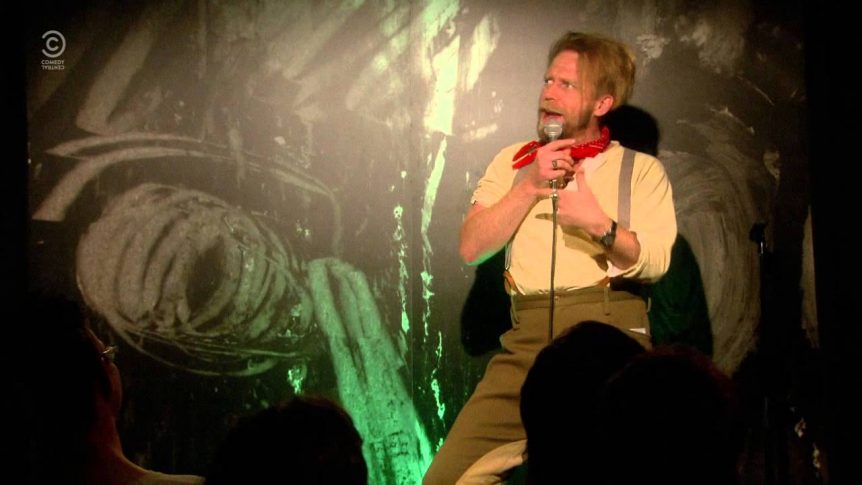 Even his introduction is seething with self-awareness, directing the audience towards what type of material is going to be presented, explaining the means of delivery, and even venturing into an overtly strange commentary on how a comedian may go about developing material and the performance of stand-up comedy itself. Heavy meta at its finest.

Law provides comedic observation on life experienced by many in the audience but filtered through the mind of a surrealist and served up in a punk rock ethos. Delving into topics such as alcoholism, therapy, and even trampolining, not everything is as straightforward as it first appears; as Law frequently uses these issues to act as the anchor from which he branches off into surreal tangents, digressions, and ad-libbed absurdity.

This dynamic is exemplified through Law’s ability to tell us about changes in his personal life, the subsequent impact this has on other areas, and then deviate into a seemingly unrelated issue, only to return to some – if not all – of the points when the audience least expects them. The method is to lull the audience into an organised chaos – articulating a collage of concepts in a decidedly dynamic fashion, and just at the point when all believe themselves to be lost, the audience’s focus is re-directed to reveal a destination to which everyone was being subtly guided.

The call-backs to previous material in his performance are plentiful, to subjects mentioned earlier in the night as well as concepts dating back to Law’s earlier work and his exploits as a time-traveller from his 2006 Edinburgh Fringe show ‘The Dog of Time’. This may sound like bold and ambitious stretch, but Law executes this in such a manner that even those unfamiliar are kept entertained, ensuring no man, woman, or space bear are left behind.

Law has been described as offering a form of comedic anarchy, and the means through which Law operates his comedic abilities allows for every embellishment, half-truth, and potential truth, to subdivide even further into the surreal. It is as a comic surrealist, relying on high levels of skill in both preparation and improvisation, that Tony Law’s comedic talents excel.