Home » The Monthly » Contributions to “What next for the Arts?” – A Radical and Unreported History – Gerri Moriarty

I should begin by referring to the second part of the title for this section, an ‘unreported’ history and begin with an enormous caveat. One chapter, in one book, could never do justice to the rich history of community arts here (in Northern Ireland), and that is why my chapter is sub-titled ‘A View from Northern Ireland’. It does not claim to be encyclopaedic, others have and will fill in the gaps in my narrative.

What I do try to do, however, is to identify some distinct strands in that history and I want to draw attention to these to-day, whilst linking them to issues which I believe are of importance now, not just of historic significance.

Just a moment first to establish the context. In the book, I look primarily at work that happened in the 1970s’, 1980s’ and 1990s’, a period characterised, in the North of Ireland, by discrimination and conflict. Doff Pollard, now a Trustee of Tees Valley Arts in the North East of England, remembers arriving as a volunteer for Voluntary Services Bureau’s summer playschemes in 1970. She remembers travelling in on the ferry, ‘walking into Belfast and people were out brushing the glass of the streets, it was the day after the July 12th marches’.

This is the first of the strands I identify in my chapter, the part played in community arts development by outside catalysts. Dave and Marilyn Hyndman explain ‘there were always weird and wonderful people weaving in and out – Belfast attracted outsiders’. John Arden and Margaretta d’Arcy, Dan Baron-Cohen of Manchester Frontline, Augusto Boal came and went. Others, like the late Mike Maloney, Chrissie Poulter and Jo Egan came and stayed. All provided expressions of solidarity to activists and communities experiencing the worst of times and all brought new ideas and expertise into what could feel, at times, like a very parochial cultural space.

The value of outside catalysts seems to me to have a contemporary relevance as we consider what kind of landscape we may face after Brexit. What is likely to happen to all of those cultural exchanges and partnerships which have been supported through European funding? Will it be possible to continue to make links through things like the European Cultural Foundation’s Tandem programme, or will the UK become a low-priority partner for European collaborations? How can we best ensure that artists and cultural organisations in countries outside the European are aware of our desire to create and sustain international connections?

And how do we ensure that refugee, asylum-seeker and migrant artists can find the support they need both to make brilliant work that contributes to social change and to gain access to training and development programmes? How do we ensure that ‘newcomers’ are included in cultural initiatives of all kinds – not, as tends to happen now in England, on a project by project basis, but in a sustained way?

The second strand I identify is that of what I call ‘the alternative proposition’ in acknowledgement of all those artists and activists who refused to accept the stifling cultural and political status quo of Northern Ireland and aimed to show that other approaches were not only possible but necessary. In the 1970s’ Belfast Arts Lab tapped into what Marilyn Hyndman describes as a ‘huge ideology of collectivism’ teaching community groups to design and print publicity material as well as printing for civil rights groups and other political groups – amongst many other programmes of work. The Hyndmans went on to found Northern Visions – an organisation that believes in ‘a democratised form of media, where new technologies are utilised as a tool for expression and creativity, to effect social change and combat poverty, social exclusion and isolation.’ In this section, I mention the work of North West Musicans’ Collective, who start by finding a building where they can store equipment, make recordings and play gigs and go on to form the Nerve Centre and the samba band which developed into Beat Carnival.

The need for alternative propositions has never gone away; arguably as we witness and directly experience the growth of political responses that owe much to Facism, the appalling impact of austerity on the most vulnerable members of our society, the effect of climate change and the ruthlessness of global capitalism, alternative proposals are more important than ever. Alternative propositions can be seen in the ways that, even in Manchester, where the ‘regeneration’ of the city has made much city centre space unaffordable, arts organisations are still finding niches and crevices and opened them up to communities; a community design space in a church building in Hulme, a theatre and café in another disused church building in Chorlton which specialises in work with people who have experienced homelessness, talk of a community space on the ground floor of an abandoned primary school building in Openshaw.

They can be seen in the ideas contained in the Manifesto for Cultural Democracy, developed through a collective process and currently being discussed within the Labour Party, which states ‘We believe that these reforms (nine are proposed) will ultimately liberate our society from the logic of pure economic gain and instead, affirm culture’s proper role as a social value that can in turn bring the benefits of creativity, community and joy into all aspects of our democratic life, from the grassroots into government, from childhood to old age. A society defined by this paradigm – of culture for all, by all – will be a stronger society and also a happier one.’

The final strand I discuss on the book is called ‘the response of communities’ and specifically focuses on the part played during this period by community theatre. This is not intended to diminish or ignore the role of the many artists who worked with those communities, such as Pam Brighton, Martin Lynch, Jo Egan or indeed my own work with the Dock Ward Community Theatre Group, Ballybeen Community Theatre and the groups who worked together to create The Wedding Community Play. But whether it was offering locally based cultural opportunities at a time when the city centre of Belfast was seen as a dangerous place to be at night, or whether it was making work that directly addressed the political and social context of the times, community theatre gave expression to working-class communities and by and large, spoke in a voice those communities recognised and appreciated.

I have concerns now when I hear cultural organisations in England use the term ‘artist-led’ to describe their work in geographical communities and with communities of interest. Does this work privilege the ideas and preoccupations of the artist above or even to the exclusion of those of participants? Are some cultural organisations more interested in whether they can get good photographs or film footage that they can use on their websites than in issues of authorship, ownership and ethics? A major concern from me is that the hi-jacking of community arts approaches by main-stream arts organisations has resulted in what I consider to be an unhelpful blurring of definitions. On Alison Jeffers and my blog –  communityartsunwrapped.com/  – I have posted a table developed by Pierre Leichner, Eve Lagarde and Christelle Lemaire, which offers an analysis of socially engaged participator structures, It talks about the differences between ‘nominal participation’, ‘directed participation’ and ‘collaborative participation’. In terms of agency and action, these differences really matter.

At the Symposium in Manchester where our book was launched, Adrian Sinclair of Heads Together in Leeds asked what we can learn from the history of the community arts movement. He has good reason for the question; he is in the process of setting up a Community Arts Academy for young artists who are interested in developing this practice in contemporary ways. And this is one of the lessons I would draw – that we were completely naïve about how quickly the mainstream cultural establishment would adopt those aspects of community arts which it found attractive and abandon the more radical aspects which made it much more uncomfortable. 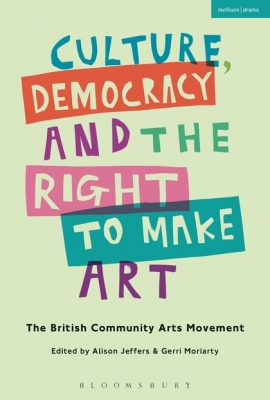 I’d draw two more lessons from the past. I think our work was under-critiqued, and by this I do not mean the frequent criticisms we received from institutional funders;  I mean the kind of constructive critique which aims to ask difficult questions and encourage the growth and development of brilliant cultural work. Few people came to review our work and when they did, they were either ill-equipped to comment on its nature or reluctant to say anything that could be seen as detrimental to our participants. I welcome the fact that in recent years, academics like Alison, her colleague Jenny Hughes and Sophie Hope from Birkbeck University have engaged with the field and as I approach ‘retirement’, I hope to be able to find ways to undertake the same kind of endeavour. We need the problematising skills of academics and their breadth of reference, particularly in a world where spin is everything and practitioners self-censor for fear of losing funding or their jobs.

My final lesson, which was learned in a very hard way, was about the massive toll this kind of work can take on the health and wellbeing of the creative practitioner. After the Wedding Community Play project, Jo Egan and I would say it took us at least a year to recover, physically, psychologically and emotionally. Caring too much for both participants and the performance, working long hours, dealing with stresses from the artistic to the paramilitary to the financial to the logistical, under-supported and at times under-appreciated, we were pretty much burnt out. I see this happening now, particularly for younger people, both those who work as as free-lance artists and those who work within cultural organisations. We need to speak out more about health, wellbeing and the employer’s duty of care and we need to do much better at nurturing and supporting workers.