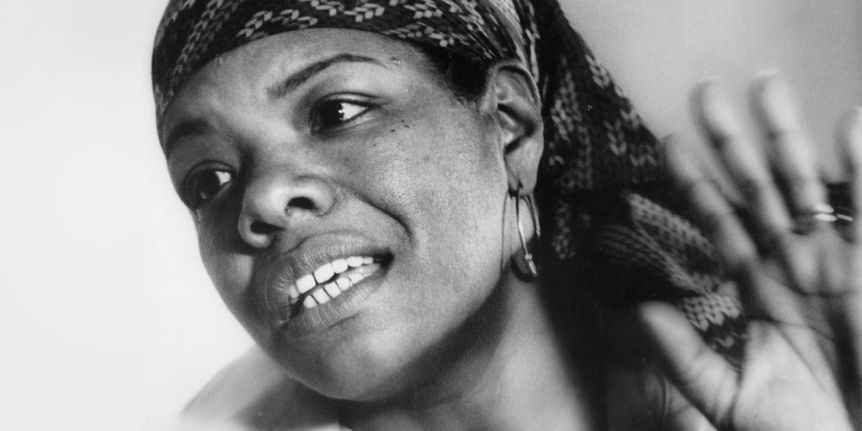 Her place in history:

When considering the most effective cultural leaders of our time, it is important not to write women out of history. In recent weeks there has been a controversy about women like Mo Mowlam and Monica McWilliams being written out of the history of the Good Friday Agreement:

There is valuable learning in controversy such as this one for everyone, including those in the creative sector. We must be mindful of the women artists who have had considerable cultural impact, such as Dr Maya Angelou who was born into poverty and segregation and died as a well-respected public figure who influenced celebrities from Oprah Winfrey to Tupac Shakur, as well as major political figures such as Bill Clinton and Barack Obama.

She also received over 50 honourary degrees in her lifetime and completed significant study during her long and productive career as a poet, playwright, director, memoirist, singer, composer and activist. Dr Angelou’s poetry is soaked in themes of recovery, developing self-belief and breaking free from oppression. It therefore has considerable impact in any creative workshop designed for a mental health setting.

Perhaps one of the most remarkable things about Dr Angelou is that she made a particularly powerful recovery from early life trauma. Dr Angelou spoke publicly about the fact that she was raped when she was aged just seven and she experienced what she called ‘selective mutism’ as a result of this trauma.

As Dr Angelou progressed into young adulthood, it appears that she faced some difficulties since it is recorded that there was a period when she worked as a sex worker and there are accounts which state that she served time for this. In typical Maya Angelou style, she looks back on these things with a strong sense of triumph and compassion, bearing witness to the profound healing power of literature. She gives the world a bold and brave account of her story, saying:

‘When I decided to speak, I had a lot to say.’ Maya Angelou

Out of Dr Angelou’s intimate encounter with great literature during her period of mutism, she found an extraordinary poetic voice, which provided cultural leadership in terms of issues of race, mental health and gender equality. Her poem ‘Phenomenal Woman’ is well employed by creatives who may wish to empower women in recovery from things like domestic violence or post-natal depression. To call oneself a phenomenal woman is a powerful statement. Her seven volumes of memoir are in equal measures gripping and inspiring, showing the reader that it is always possible for the human spirit to triumph over cultural oppression, for the individual to rise having fallen.

On The Pulse of the Morning:

Perhaps a key moment in Dr Angelou’s story is the Presidential Inauguration of 1993, for which she composed and read the poem On the Pulse of the Morning, leading her country through a transition with the words:

Here on the pulse of this new day
You may have the grace to look up and out
And into your sister’s eyes, into
Your brother’s face, your country
And say simply
Very simply
With hope
Good morning.

A Brave and Startling Truth:

Another key moment, fully galvanizing Dr Angelou’s position as a major cultural leader when it came to peace building was her composition of a Brave and Startling Truth to mark the 50th Anniversary of the United Nations. This poem reflects on the nature of peacemaking, when human beings cast aside all moral apathy and recognise the transformative significance of human beings that we will ‘come to it’ (peacemaking):

When we come to it
We must confess that we are the possible
We are the miraculous, the true wonder of this world
That is when, and only when
We come to it.

It is impossible to think of Maya Angelou without paying tribute to her iconic poem ‘Still I Rise’, a poem overflowing with the powerful account of an African-American women’s story, but entirely relatable to anyone who has suffered any form of bullying or marginalisation. It is a beautiful and empowering call to action, exhorting the reader never to bend to adversity or to be broken down by others. Instead, the persona rises, right where she fell, at first like dust, later as a mighty, black ocean and finally rising and rising and rising.

Leaving behind nights of terror and fear
I rise
Into a daybreak that’s wondrously clear
I rise
Bringing the gifts that my ancestors gave,
I am the dream and the hope of the slave.
I rise
I rise
I rise.