What is your connection to the Belfast City Breakers?

I first met members of the Belfast City Breakers at an event I organised in March in Belfast for the Festival of Ideas and Politics.

The event was called “What has Hip Hop ever done for us?”, and was a four part tribute to Hip Hop culture in Northern Ireland featuring film, discussion, live performance, music, dance and comedy.

The film we showed was the sensational documentary by Belfast-based film maker Chris Eva, “Bombin’, Beats and B-Boys” which documents Hip Hop culture in Northern Ireland.

For years Chris has been recording Northern Ireland’s growing Hip Hop scene and this film focuses on the four main elements of Hip Hop (Graffiti, Mcing, Break-Dancing and Djing).

The film features interviews from the legendary Belfast City Breakers talking about how they broke down barriers during the Troubles through their lives as B-Boys. When I was putting together a panel for the Q&A/audience discussion, Chris suggested contacting some of the B-Boys from the original Belfast City Breakers for this, so I duly contacted Geoff Allen and William Madden.

The event seemed to bring together many people deeply involved in the Hip Hop scene in Northern Ireland all the way back to the 1980’s, particularly those who had grown apart after the death of a legendary B-Boy called John Madden.

The Madden Twins, John and William, were very much at the forefront of Hip-Hop culture setting up a break-dancing group and inspiring others to do so.

After my event, William Madden told me that he had always wanted to have an event celebrating his twin brother’s life and he asked me if I would organise it.

This was a huge honour and I have been busy ever since making it happen.

So what will this event consist of?

It is the 35 year anniversary of the Belfast City Breakers so we will be looking at the group’s history and the impact that a group of local break-dancers had on the growth of the Northern Irish Hip-Hop scene. This is going to be a huge dance event, and apparently the biggest Irish B-Boy event of the year. We’ll have top DJ’s performing and breakers travelling even internationally to honour the legacy of the Belfast City Breakers and to pay tribute to John Madden.

Posted by Together In Pieces – Documentary Film on Wednesday, 18 July 2018

You will also have a group called the Bad taste Cru performing?

Yes, this is another unusual feature of the event. The Bad Taste Cru are a breakdance and Hip Hop theatre group originally from Omagh who were inspired by the Belfast City Breakers.

Many years ago the Belfast City Breakers performed to support the victims of the tragic Omagh bombing. This was a huge inspiration to the young Omagh breakers, who eventually all left their home town and made their way to England, where they are still based in Newcastle Upon Tyne.

They still perform and compete in England and all over the world, inspiring generations of young people, but they rarely perform in Northern Ireland.

Is this part of the work you do with your organisation “Together in Pieces Interactive CIC”?

Our work at Together in Pieces Interactive CIC aims to raise cultural awareness by exploring Hip Hop culture, particularly among young people. We also hope to engage the wider public in many issues that are very important to building a lasting peace on this island.

Our work, which is all interactive, in film, festivals, workshops and events, as well as our new venture into comedy, aims to stimulate debate and discussion.

So there is a strategic orientation with your projects?

We would hope that our longer term strategy would involve bringing our work not just to towns and cities throughout Northern Ireland but eventually all around the island of Ireland and also to people living in divided communities around the world.

Anything that brings people together regardless of the community they were brought up in, and Hip-Hop definitely does that, is useful in terms of breaking out of the sectarian mind-set that dominates where we live.

Beyond that the event, which takes place on August 4th at the Oh Yeah Centre, will be a fantastic introduction to the history of Hip Hop culture in Northern Ireland. 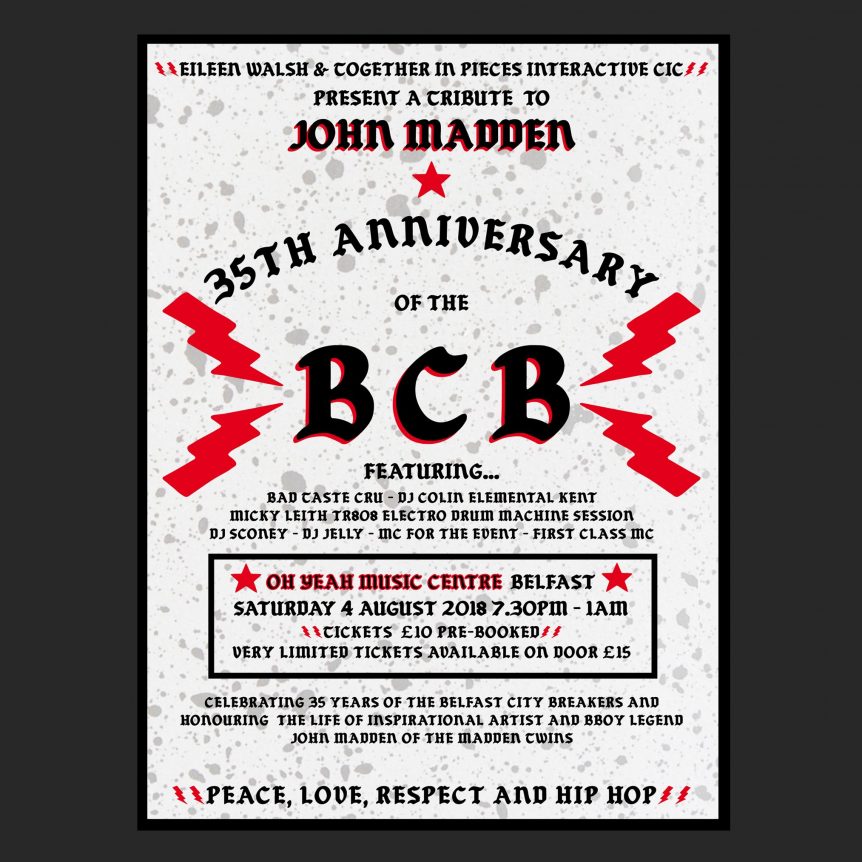