I first saw Declan O’Rourke in concert some years ago, when he played in The Black Box. I wasn’t particularly familiar with his work then (my father had recommended him, and I trusted his taste), but discovered an adept songwriter and truly spell-binding performer.

Declan O’Rourke was born in The Republic of Ireland and moved to Australia at a young age, and spent much of his childhood travelling between the two before settling in the land of his birth. Hs music is shaped by the rich traditions of Irish folk, with socially conscious singers such as Luke Kelly and Liam Clancy leaving a delible imprint in vocal delivery and subject matter. But there is no stage-Irishness about O’Rourke.

While his roots clearly lie in Irish folk, his songcraft is not limited or pigeonholed by any strict definition as an Irish musician. His musical vocabulary is enriched by intricate jazz chords, bluegrass flatpicking techniques, and impressionist soundscapes whereby real-life phenomena are interpreted and recreated with musical instruments. 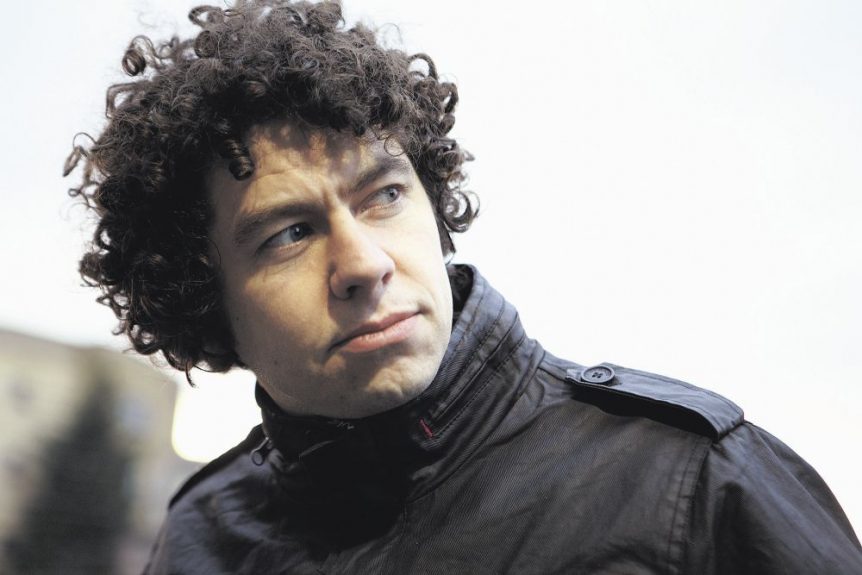 Having heard little and seen less of Mr. O’Rourke in the intervening years, I was delighted to see that he was playing near my hometown and leaped to buy a ticket. Would this second concert attain the same levels of magic as the first?

This concert would mark my first visit to The Homeplace, an art centre dedicated to Mid-Ulster’s most lauded son, Seamus Heaney. The drive there is a pleasant one, winding through quiet villages, fields and farms. When ordering my ticket (and tickets for my mother and brother, who accompanied me) I was advised to come early in case there was a lack of parking spaces, but we had no such trouble. The Homeplace is an impressive, modern facility, full of art and installations inspired by Heaney’s work, and operated by helpful, welcoming staff and volunteers.

The concert took place in The Helicon, a theatre named after one of Heaney’s best known early poems, its name in turn a reference to the mythical spring of inspiration from Greek myth. The Helicon is a room with terrific atmosphere and excellent acoustics. Seating is arranged in concentric tiers, rising towards the walls, with the middle space occupied by a few tables. This arrangement provided excellent sightlines all round, except for the higher tiers to the immediate sides of the stage which were impeded by the stage’s sound system. 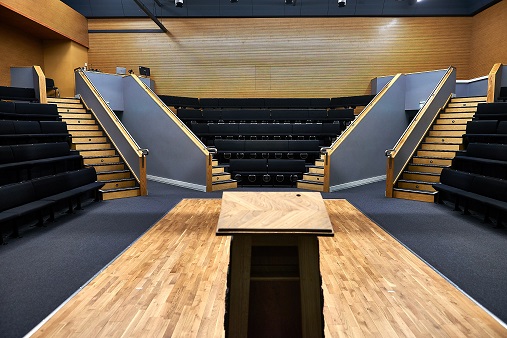 I must caution anyone who might go there in future that the tiered seating does not provide adequate legroom for people of even average height; my mother (who is not particularly tall) complained that her legs were cramped, to which my 6′ brother expressed relief that he wasn’t the only one struggling for comfort!

We moved to some free seats in the top tier, which were placed farther from the backs of those in front. To anyone attending a concert in The Helicon, I would advise them to purchase a ticket for the top tier or one of the central tables,

When Declan O’Rourke emerged, he was resplendent in a brand new, chequred Italian suit – label still attached! He received a warm reception, declaring his pleasure “to be here on hallowed ground” and that he had been looking forward to this concert for a long time, to which one woman was clearly heard to respond “Me too”. This set the tone for the performance that followed: an engaging performer, an attentive audience, and an instant, easy rapport between both.

O’Rourke possesses impressive musical abilities, as he played to the audience using five different guitars, a bass drum, and an array of effects pedals. His guitars were prepared in different tunings, broadening his musical palette with an array of textures and voicings unavailable to a single guitar in standard tuning.

The bass drum was used to great effect on particular songs, adding a low, rumbling percussion to underpin O’Rourke’s deft guitar skills and rich, melodic voice. His songs are well written, with music and lyrics meticulously crafted to suit each individual (and often daring) theme:

“Indian Meal” is a sardonic, sneering description of the British government’s paltry relief attempts in the Great Famine, brought to life with a traditional style melody, blasting bass drum and strumming techniques more usually seen on a bodhran;

“A Sketch of a Cave Near Mitchelstown”, a song which protests the disrespectful treatment of an ancient, natural wonder by its visitors, is given atmosphere and nuance through harmonic notes plucked from the guitar and echoed through the sound system; the listener could close their eyes and imagine themselves in a subterranean cavern, as water droplets fall from the ceiling to strike the prehistoric floor.

But perhaps the most distinctive element of a Declan O’Rourke performance is not the music, as wonderful as it is, but the way in which they are presented. Most of the songs were given a riveting, informative introduction explaining their subject matter, inspiration or historical context. One song was an attack on racist immigration policies in Australia (“that barren jailer’s land”), which O’Rourke explained to have been commissioned for a festival  to mark the 150th year since the last convict ships. O’Rourke made the point in his song that human bondage and oppression still exists in that country, and gave an enlightening history of the human rights campaigner John Boyle O’Reilly who was sentenced to a life in Australia for his part in the 1867 rising, but who escaped to Boston. Perhaps I sound like someone at a gallery who is less interested in the paintings than the frames, but I really enjoyed the explanations of the songs, both for the rich contextual information they provided and for the conversational tone which they lent to the performance.

After a short interval, Declan O’Rourle closed the set with some tremendous singalongs. Early hits “Galileo” and “Sarah” required no introduction and were immediately familiar to long-term fans. “The Great Dying Off”, a cynical song about climate change presented in a wryly happy style, had the entire room clapping and chanting along.

After the performance, Declan O’Rourke sold his albums from two sumptuous, vintage leather suitcases customised with lights, providing autographs and chatting with the audience.

My second time seeing Declan O’Rourke exceeded my expectations. Any fears that the impressive impression of the initial concert might have been a combination of an impressionable naievite and fond nostalgia were quickly dispelled. Declan O’Rourke is a songwriter of substance, an entrancing story-teller, and a musician of the first order.