What led you to the creation of the MindHarp?

That is a relatively straightforward.

For many years I have had this deep belief that bringing ALL people together to make music will lead to a better and safer world. Now I do need to qualify that; it isn’t just about making music as we presently understand it; it is actually the question of sound, people actively making sounds together.

Over the years I have been working with sound and music, I have learnt that we are all designed to respond to musical activity and to participate in the making of music. It is healthy for us to do this. It is just as important as our diet is or keeping fit and healthy.

Understanding this approach matters because as particular historical developments have impacted our lives, making music has tended to be left to specialists, high-level musicians, and the rest of us become passive listeners rather than participants. This is despite the fact that we are all designed as humans to be part of making sound.

Is this backed up by research?

I’m not a neurologist but I’ve read enough about neuro science to know that there is a view backed up by scientific research, so a scientific view, that there are neuro sensors located within the brain which connect specifically to musical sounds.

It isn’t just birds tweeting or the noises of cars in the streets. It isn’t just reacting to environmental sounds. There are sensors in the brain which operate directly to process musical sounds. From these sensors it is suggested that the leading outcome that music appears to offer is to aid social cohesion. 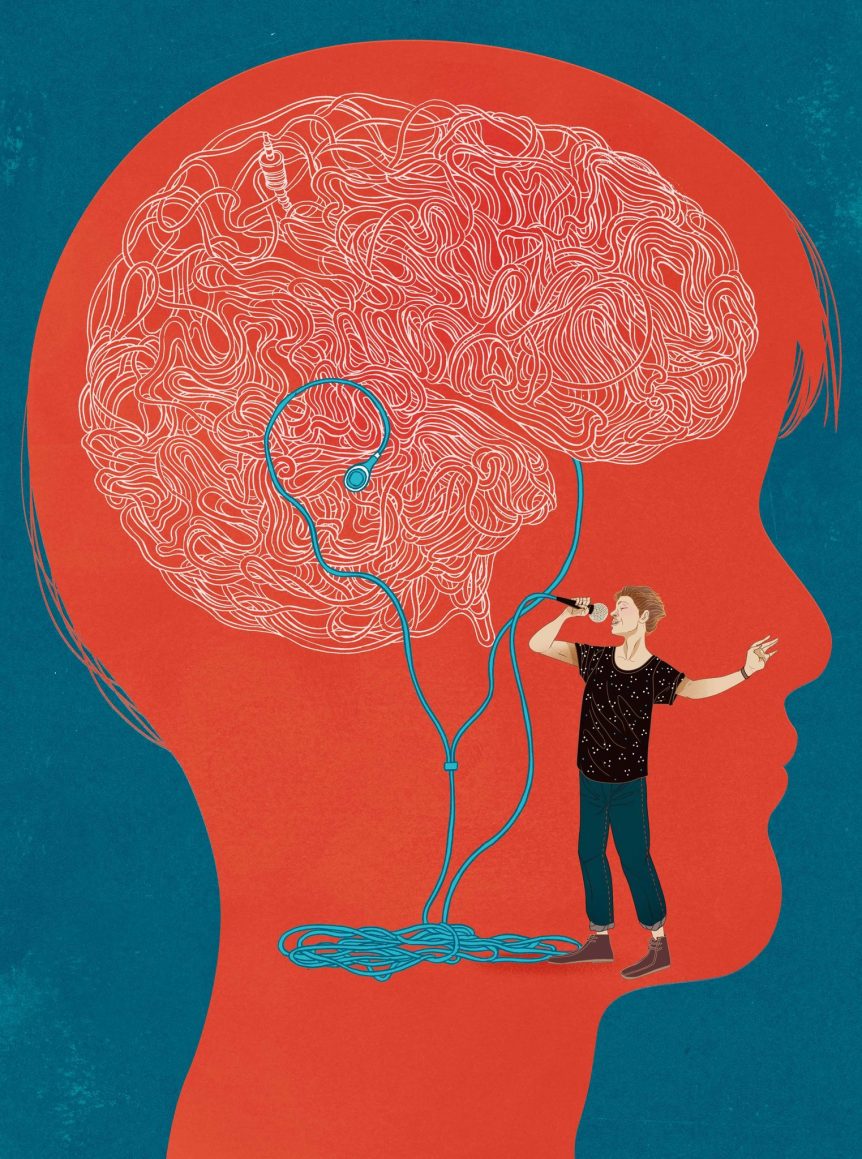 The argument being put forward is, that by taking people away from that process, away from the making of music we reduce our own human capacities.

These skills, which we have developed over many thousands of years, work to upgrade our capacity to work alongside other people, they affect our emotional well-being and are generally good for us.

So you move from these ideas to the making of the MindHarp?

Yes, but there were two challenges. I didn’t want to produce a musical instrument. I wanted to create something that anyone could work with and make sounds with. It was essential that what was developed wasn’t for musicians and so I thought eventually that what was developed should be more game-like in its approach. It had to be accessible to all.

A lot of people are intimidated when you mention musical instruments, because there is a fear that you won’t be able to learn or have the talent to play an instrument well enough. I had to produce something that would be available to everyone regardless of their capacities to become musicians. I didn’t want anyone to be excluded.

The other element was to take us into the world of sampling where sounds would be accessible to everyone. Again this wasn’t for musicians. It couldn’t be a question of playing good or bad music, or whether the chords or notes were played in the “right” order. It simply had to be about creating sound.

How does it work?

I decided to build an interface with 24 sounds spread over three banks, each containing 8 sounds. All of these sounds work together; they can be played independently, they can be joined together, there are many options to create sound.

By doing this, that removed me immediately, and anyone who interacts with the MindHarp, from the process of how musicians’ work.

It could never be connected to the idea of, “am I playing the chords correctly, or do I play the melody, or do play the rhythm?” This isn’t how the MindHarp works.

When you press the coloured buttons, everything works together. You can play all the sounds in one bank together. They work regardless of when you press the buttons which activate the sounds. You can also connect MindHarps together; the possibilities are limitless. So just to reiterate, the most important thing in all of this is the engagement?

You created this device with a person called Stewart Redpath?

He is my business partner.

I was developing the ideas, of that innate connection to the making of sound, and using those ideas in a teaching programme. I met him, he is a semi-pro musician, who has also worked for some big corporations and has worked in marketing. We discussed the ideas and agreed that we should really push the project much further along, and so together we developed the device. 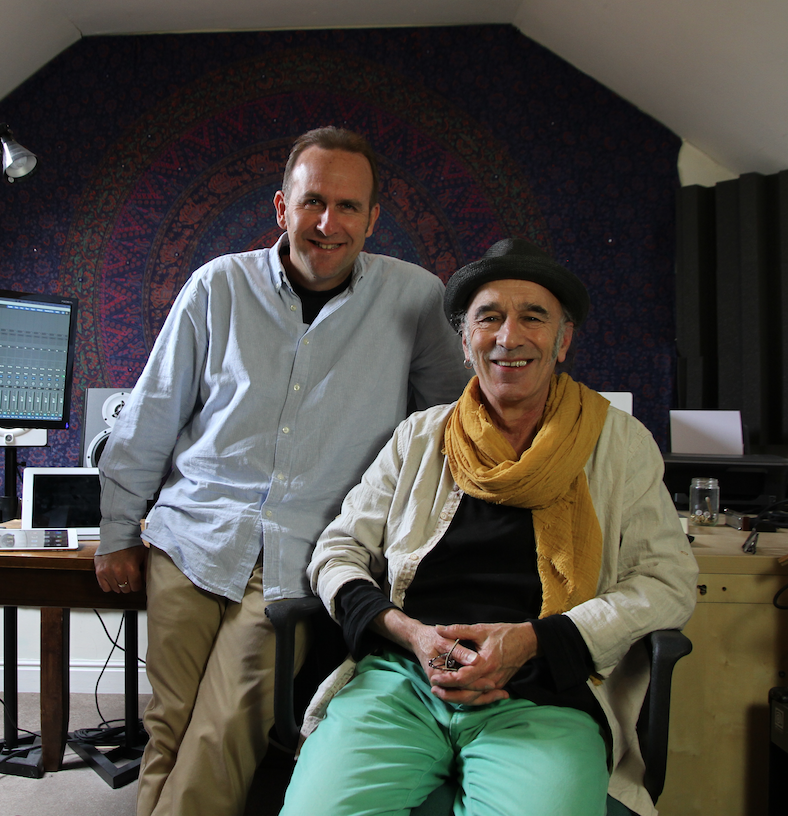 How did you get involved in working with people experiencing Dementia?

Both Stewart and I had family members who experienced Alzheimer’s or Dementia, and through a series of events we were offered the opportunity to trial the prototype of the MindHarp with people in a Care Home. Those people were living with Dementia and we were very happy to see what would transpire regarding our ideas.

We had already thought that there was a desperate need for access to a musical programme for people living with Dementia and the Peggy Dodd centre in Bath offered us that opportunity and it has worked extremely well.

That work seems to have aided in the development of The MindHarp?

Yes I think that’s right. The Peggy Dodd Centre engaged with us and our ideas. We were able to test out our prototypes with the people living in the Care Home. We were able to see what worked and what didn’t work.

We developed the hardware, we brought other people on board, an app developer who helped create the Mindharp. We were working out what frequencies worked best, what colours, the way the interface looked and worked. It was a constant learning curve. We ended up with an app which we could put on to iPADS and we would then test what we had produced with the people living in the Care Home.

It seems from the material you have online that The MindHarp produces some impressive results?

The first thing is, that the people are creating the sounds themselves. Those sounds start to create a pathway where people engage with each other. They might push the buttons on another person’s iPAD, or they might be listening to the sounds another person is creating. They might start making sounds together. Then discussions start about what the sound represents. That appears to help stimulate memory.

And in my view, this all happens because of the way music and sound interact with our brains. And that occurs whether we like it or not. It is a natural process.

You don’t neeed experienced musicians to do this. Now I’m not suggesting that we want to replace musicians here, especially musicians who work with people experiencing Dementia. Rather this is an adjunct to that experience. I want people to experience, engage with and be part of as many musical experiences as possible.

The MindHarp has the potential to be used continually?

Yes. We would suggest that if someone was to engage in creating sounds at their place of residence, their home, every day for 5 minutes, 10 minutes maybe even longer, then there would be a substantial impact on their well-being. The MIndHarp can be there all the time, it can be connected to other therapies, to invigorate lunch times, to other activities.

I’m not saying that this can cure the loss of memory. Rather we can alleviate some of the difficulties associated with the illness, stimulation of emotional memory, comforting people, stimulating discussions, creating harmonious experiences, creating avenues where people connect with each other.

Is it only for people with Dementia?

For a variety of reasons the first field that we dived into at Lydianstream was in the world of people living with Dementia, but this is an application for all people. As I said earlier, I believe very much in the power of music and sound. Based on scientific exploration, music and by that I mean musical sounds, has a substantial impact on us as humans. It is crucial to our development, crucial also to our connections with each other. The MindHarp is based on those underpinnings. Yes, we believe it is working well with people experiencing Dementia, but it is not limited to that type of practice.

For more information see the links below