We ask everyone this question to start with – can you remember what first got you started with regards an interest in the arts?

I don’t have a specific memory of when I became interested in the arts but it was percolating in my family environment, the household I grew up in.

I grew up in Rosslare in County Wexford. People worked in the ferries, or the railways or local hotels.

I come from a family of makers. In our house if a birthday cake was needed it got made, if you needed a jumper it got knitted for you.

My Dad was a fisherman so he had to mend his own nets. We were a very practical household. In hindsight, we had quite an idyllic upbringing.

Did you do arts or artistic activities at school?

I grew up in a Catholic environment and the church was part of our school. I was taught by nuns and they were part of our education system. All around us we could see imagery, Renaissance art, reproductions in the Church, tapestries which were made locally, Book of Kells imagery; all of these images were around.

Even when I was very young we would be asked to draw things of religious significance and I developed an interest in decorative arts through those activities.

I’m not now a religious person but it was that imagery and those practices which opened the door to the arts for me. I was able to visualise what people meant by the arts from an early age.

Did you continue with the arts after school?

Yes, I went to Art College where I discovered I was dyslexic. I went all the way through school organising myself in a particular way to get through, my family knew but it was never brought up, so I discovered this when I was in the National College of Art and Design in Dublin.

I flourished at the college and really by that stage I had already worked out how to get things done through creating a visual language for myself. I never found that it was an obstacle to my creative activities.

This is the period of the Celtic Tiger and after I completed college I went back to Rosslare and intended to be a painter, but not long after that I was called up by the Head of Graphic Design for a graphic design post.

At that point I think people were looking for artists who could fit into the new digital world, who could work on websites and produce graphics for this new world.

I was, as were many of my generation, churned out to the fast paced world of the Celtic Tiger; good jobs and good wages and an expectation that you could actually make things happen.

Eventually I travelled to Australia, to Melbourne, and I had a really great time living there and then I returned to Belfast.

So you return to Belfast after the Good Friday Agreement had kicked in?

Yes. We didn’t want to live in Dublin because the Celtic Tiger had pretty much tired us out, and the situation seemed quite good in Belfast. There were opportunities to be part of rebuilding Belfast as a city, as a place to live your life in.

I applied for a job and got one as did my partner, so we stayed here. At the time Belfast was starting to reap the benefits of the Good Friday Agreement.

I’ve been here working as a designer for the last 15 years.

How do you get back to being a painter?

I was working as a graphic designer, as a creative director, and I was just about to have my first child. I really felt that I was a painter that wasn’t painting. And around the same time of thinking about going back to painting, I had two life defining events. I lost my mother and I had a child. This was an incredibly emotional journey. It was also a period where the past and future were colliding.

I returned to painting during this period. I couldn’t have planned this. It was a seismic change in my life and my return to painting was part of that situation. I ended up working in my attic.

You have said that you are influenced by the Irish coastline when you paint?

Yes. The Irish coastline is part of my earliest memories, it is fused with my internal perspective as it often directs how I look at the world.

The coastline is in my memory with regards what I was like a child, it is in my memory as an adult, and my attitude to the Irish coastline, even the winds which accompany the coast or the elements which shape it are part of the thematic approach which underpins my work.

I work intuitively but there are constant themes which permeate the processes I use.

Do you have any other influences?

I listen to a lot of music when I paint; I’ve been listening lately to Declan O Rourke’s “Chronicles of the Irish famine”. Actually I went to see him perform recently and that was very inspirational. I listen to podcasts as well.

My paintings have those underpinnings but they are also a celebration of people that I know or have met or who have been part of my life. My work can be considered quite abstract, but within them I have representations of people and buildings.

Did you start of as an abstract artist?

No, I wasn’t trained as a painter, although I would say that my approach has a particular orientation. I often start with something quite forlorn, but aiming for hope.

I have never wanted to simply paint a house. I really want to paint my interpretation of a particular building or person. It is much more about representation.

I am a very intuitive artist and I can’t keep working on a piece because I need to work with the feeling that I am aiming to convey. My painting starts off with a tension and it takes time for me to resolve that tension.

How do you know then when you have completed a work?

I think that I tend to start off with something which can be quite sad, or at least there is an element of sadness contained within the work and the painting moves towards a journey where there is hope.

There is almost always the representation of a journey, a path, a destination and even though these might be very personal and intimate to me there is plenty there for other people to experience when they view the work.

Is this connected to the literary genre?

No, it is much more about how I see people remembering conversations, or how I remember conversations. If I am trying to show a conversation with someone, I might be thinking about the background, the coastline, the sea, the area where the conversation took place.

Well, I don’t know very much about Jazz, actually I know almost nothing about Jazz, but the crucial thing is that the work offers an interpretation which can’t simply be literal and that a transition takes place between the start and the work being completed.

How do you go about selling your work?

I didn’t want to go back to graphic design and I wanted to be my own boss. That meant I had to be quite serious about selling the work. I was invited to put a few of my paintings in a Christmas show and they sold. That bought me a few months. Then I had a solo show in Framework. I sold 85 per cent of the paintings at that show and that was a little win that gave me another 6 months.

I had paintings exhibited in a gallery in Dublin and eventually I moved towards organising two shows a year and I aim to sell my work at those. I run my work as a business and I have monthly targets so that I can earn enough money to make my business work. I need to sell my paintings and that means they have to work as a commercial entity. I have a solo show coming up in Wexford, “Nature and Nurture”, and another show in the New Year.

You also work as a street artist?

I was invited to paint at the Hit the North Festival. The journey was interesting and it involves Adam Turkington.

I knew Adam from a previous occupation so I had a connection there and when he was looking at using an empty bank building to house artists he contacted me. I was a founder member of “The Bank” on Newtownards Road. There were 23 artists who helped make that space work. I ended up sharing a space with Ed Reynolds and Ash Plum.

Adam was working on a street art festival in east Belfast and I was invited to be part of that. There was quite a few of us from “The Bank” who were part of that initial festival.

I was invited to paint as part of the Hit the North festival as well.

Now you are part of The Vault?

I became a trustee of “The Bank” and Adam Turkington was talking about moving everything to the empty buildings in Tower Street in East Belfast. This has worked out really well. There is a much bigger community of artists now and people are collaborating, working in all sorts of genres and I have a good space that allows me to work on my painting and take what I am doing further than if I didn’t have a dedicated space. 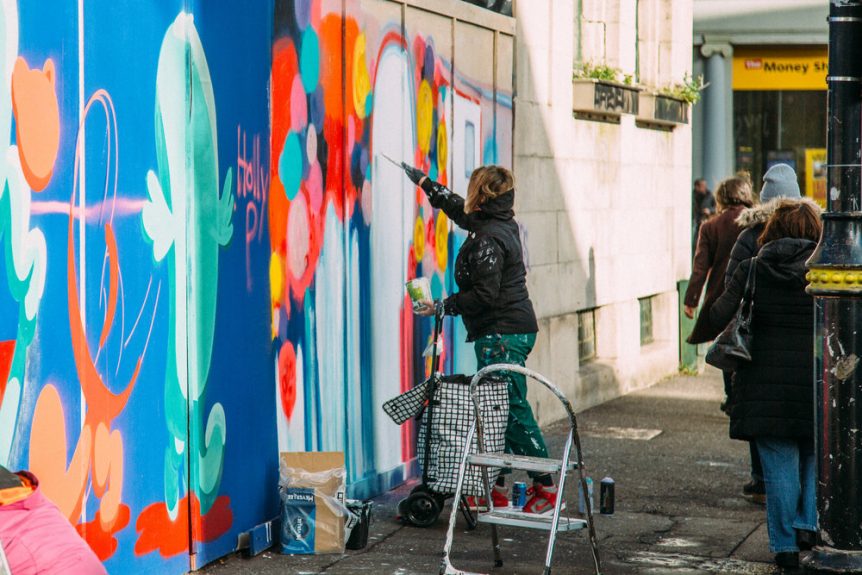 If you want more information about Esther O Kelly you can find it at the following link – estherokelly.com/