How did you come to live in Northern Ireland?

There was a person called David Day who was from Ireland and he learned the rhythms from the Akrowa group.

He had a friend called Siobhan who was also interested in learning the rhythms and he suggested that she went to Ghana.

I taught Siobhan and to cut a long story short we ended up in a relationship and we were married in Ghana.

I think if it was possible we might have stayed in Ghana but in order to work, it made more sense to come to Northern Ireland.

When did you move to Belfast?

Around 2009. It was my first time in Europe, and it was quite a shock to the system initially. It was very cold and it rained a lot.

Did you play drums in Belfast immediately?

It was very strange at first. When I went along to drumming circles or watched drummers, I was very surprised at the standard. It was very low. Very few people had any serious technique, in fact almost all the people I watched had no distinction between their bass, slap or tone.

Almost everyone that I went to see or played along with; their notes sounded exactly the same whether it was a bass, a slap or a tone.

I just couldn’t work it out. What I didn’t realise was that people just wanted to have fun by and large, rather than necessarily wanting to learn how to play properly. I took a long time to understand that and to adapt my thinking to that.

For me I felt that I wanted to teach people how to play properly. It was essential that everyone developed good technique, a good understanding of the rhythms and that people should develop to a good standard.

You were part of building Releasing Rhythms?

Yes. When I was still living in Ghana, Siobhan and I talked about the company and then when I came to live here we worked on building up the business; we had flyers, a website, we drove around a lot trying to build up our business.

You also played in Magwere and you set up your own Akrowa group?

Yes. Wilson Magwere is from Zimbabwe and when I first came here he had his group Magwere.

Magwere was a mix of local and African musicians and he asked me to play with the group. At the time they had a wonderful young drummer in the group, a really gifted young musician and I enjoyed playing with Magwere generally, but especially with that drummer.

Why did this drummer matter?

I find that it makes a difference to me if the people I play with have natural talent and don’t need to force the rhythm. I see a lot of drummers who I think force the rhythm or fill up all the available space.

I have played with some drummers, kit drummers I am talking about, who just play every possible beat they can fit in and they leave very little space for me to add in to the rhythm.

Very much. I wanted to create a group where everyone understood what we were doing regarding creating African traditional music. I concentrated on technique and on key rhythms, at the beginning Kpanlogo, Fume Fume and a few other traditional rhythms, and I taught people for free.

The group worked well for a little while, then we couldn’t hold it together and when I went to the Crescent Arts Centre to teach students we were able to re-energise the group.

Akrowa managed to get quite a high profile?

We played in lots of community centres, at local festivals, multicultural festivals, we played at a few events run by Community Arts Partnership; there was one gig where Okoe Ardyfio’s Akrowa group came over to Belfast and played in the Black Box. That was a PICAS event which was run by CAP, so CAP gave me support. The group also played for the BBC, so yes we definitely built up a profile.

I have my own Drumming School now and I very much want to do two things. I want to teach people technique, rhythms and how African music works.

I want to teach people the language of the African drum. That is very important, my traditional music is a language and to me it is vital to learn that language.

The other thing I want to do is to maintain my skills. That is quite hard to do when there just isn’t many people here who play to the standard that my contemporaries in Ghana play to.

I work with drummers in Scotland and England, and I do try to keep up with developments in Ghana but I know that when I return to Ghana people think I have lost some of my speed.

I can pick that up after a little while of playing with people at home but that requires a lot of work when I am away from Ghana.

I am happiest when people tell me that they can see the difference between the technique I teach and just playing in a drum circle because even though I understand that many people just want to beat the drums for fun I want people to learn the correct way to play. 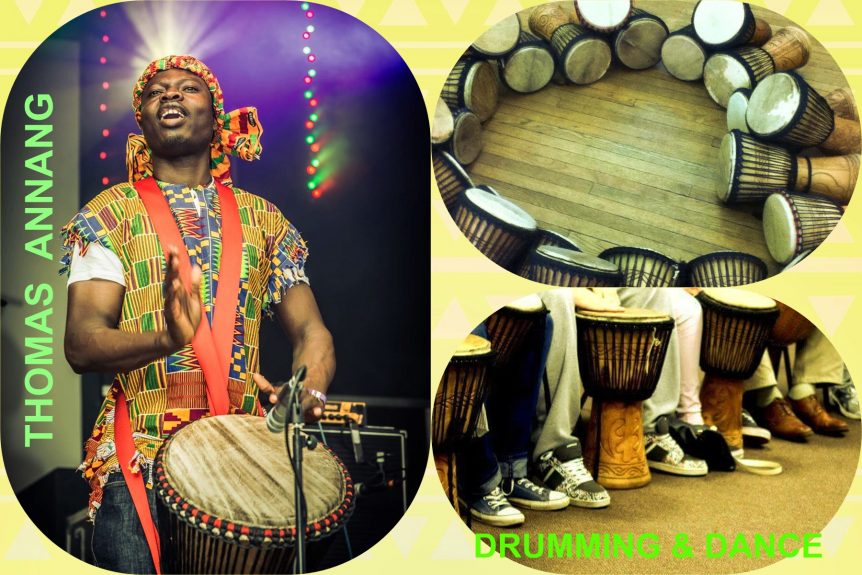