The Minority Community Network has been working on a new television programme at the Arts Resource Centre. The programme they have been working on will have a talk show or magazine style format and will aim to share the stories of migrants and members of minority communities living in n Northern Ireland. 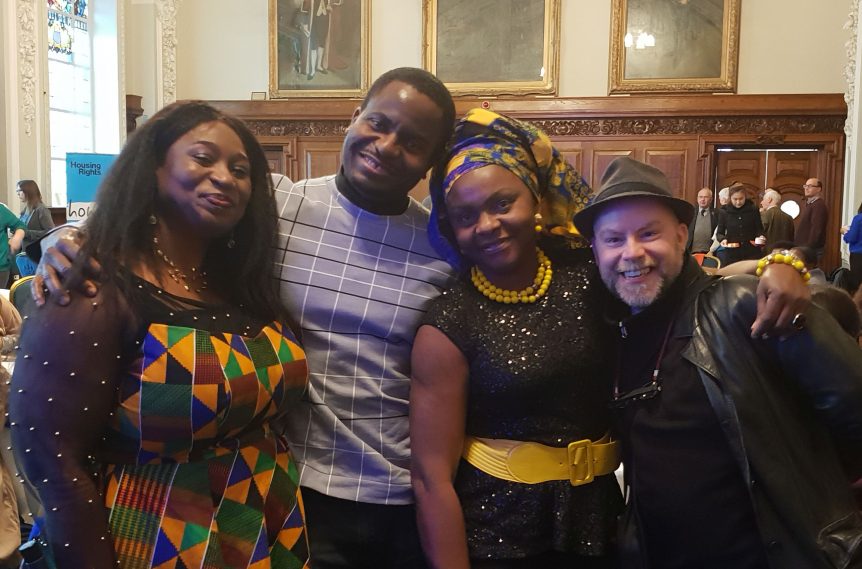 The members of the Minority Community Network (MCN TV) working on this particular presentation are:

How did this project come together?

We were being trained in community management and community leadership in the community and I thought that it would be nice to have a television platform where at the very least we could invite people from ethnic minority communities to share their stories.

I didn’t think that migrant stories were really at the forefront of other television platforms and once I had that idea I wanted to talk to people to see if we could make that idea into a reality.

So what happened then?

I met Alexis and I asked her what her background was. She told me that she read Mass Communications and I thought that she might be able to work as a presenter. She is an excellent communicator, so that worked out well

Israel, you went around approaching people?

To begin with, yes. After one of the training sessions I saw James in the car park and I think I had seen him before, he was holding a camera, and I thought he would make a good camera man.

Aberonke, I approached as well. She is a great designer; she is able to transform spaces very quickly.

There were 4 of us in the beginning and we met and started to discuss what we could make happen.

So, four of you to begin with?

Four of us to begin with and we met and discussed what might be possible and everyone want away and when we met again the dream had become even bigger than the initial outline of the project.

There was still another person to come on board.

I met Mehrshad at the great refugee picnic. He was a member of an organisation called City of Sanctuary which I am also a member of.

He was taking photographs and it turned out he had been a producer in Iran. He knew his way around a camera and he knew how to work on productions, so I asked him to be part of the group as well.

One of the amazing things about what we are doing is that the seeds were sown for this project within a few hundred feet of this room. Israel saw me as I was walking passed the John Hewitt Bar, others have been at the same training course, and you’ve heard how Israel met other people.

With me, I have a company called Belfast Bohemian Productions and I had been working with the African – Caribbean community doing videos and music production so that was in the ether as well. I think Israel had met me through that before he approached me. It all came about by incredible coincidence and hard work and enthusiasm. And now we are working on the show in the Arts Resource Centre. 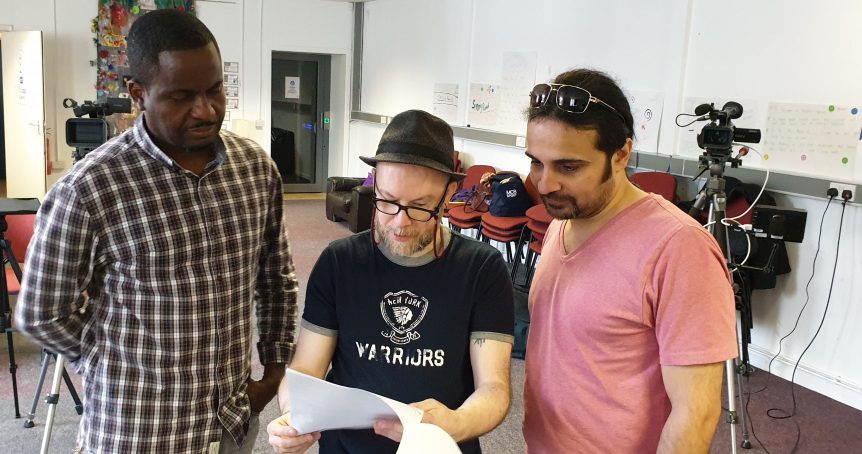 Is this project trying to address something?

In some ways yes.

The week before the leadership training there had been an ethnic minority family put out of Tigers Bay, and the media ran with that. It is often the case that if you come from a minority background, the only time you see yourself represented in the media is when a racist attack happens, or there are refugees being talked about or the latest immigration figures.

We are more than that. Our stories deserve to be celebrated. There needs to be a celebration of all aspects of migrant culture. Actually, I would say that our stories should appear just as rounded, just as detailed as those of the indigenous population. So that informed the idea in the beginning.

And we did have to sit down and work out exactly what it is that we wanted to achieve. Who was what we ar3e doing for? Who was our audience?

We want to provide a space where we can get the voices of everyone who lives in Belfast heard. We especially want to hear minority community voices.

We want to reflect this the people we interview, in the stories we tell, and also that we are creating a network as well. We want to engage with the minority communities, offer a space to get those experiences and stories out to an audience and in the process of doing that to develop connections with people.

Do you feel minority community voices have been excluded in the local narrative?

It depends on how you define exclusion, I do think there are serious issues regarding discrimination, and I do think that needs to be addressed, but again it is only one part of a much wider story. And that is the starting point. Of course we will touch on difficult questions like discrimination or racism but we are aiming for something much richer than that. I am quite frankly tired of being asked where I come from originally. Actually, I, like many other migrants, am making a contribution here. That needs to be explored.

Yes. It is a question that we get asked and it is the case that the colour of their skin has marked them out as different. However I love Belfast and I am building a life here. This is where I am from.

That question will keep coming up no matter how long we live here unless we address it and our show will aim to do that.

There is an added element to all of this in that when people come here to live, especially from another country, you come here to an already divided community.
We have two indigenous white communities, divided by religious and cultural differences and if you come from somewhere else you have to navigate that situation right from the beginning let alone the other issues people have mentioned.

I tell people I am from North Belfast because that is where my home is now. I let them figure out how to respond to that.

I think you can see this on Culture Night. It really isn’t complete. While Culture Night looks good and there are lots of great things to see there needs to be an inclusion of all cultures based in Belfast.
The Minority Community Network pilot show will be called “Shared Voices”

As we have said our aim is to share all aspects of the migrant community and each show will look to offer as complete a picture of minority communities. We want to reflect as wide a range of stories as we can. We might have on a show, an estate agent, a musician, a doctor for example and before we speak to the guests there will be a short documentary style segment which will introduce them and what their lives are like.

There will be a discussion section of the show as well so that there is a dialogue between the guests and the presenters. Each guest will be someone who represents a particular minority community, again we will be aiming to offer a broad range of the people who live here in Northern Ireland.

We will be looking at various options, it may go out as a podcast, and it will more than likely go out on an online platform. The most important thing is to get the show produced and go from there.