Home » The Monthly » Csilla Toldy – her thoughts on “cultural diversity in the arts, crossing borders within and without the island”

The UNESCO Universal Declaration on Cultural Diversity proclaims that the roots of “cultural diversity” have to be planted in each individual, while they acknowledge the “otherness” as well as the plurality of their own identity.

Diverse cultures co-exist in modern western societies and they do this, by and large, harmoniously. Apart from politics, policies and policing, every sensible government should recognise that the arts are the most effective means to create this peaceful co-existence. If ethnic minorities can express their uniqueness in dynamic and artistic ways this can bring about intercultural dialogue, enhancing understanding, providing a basis for the well-being of society. Art, as created by the artist, gains its meaning in the eye of the spectator. So, art is “participatory” by its nature and the viewer is always a co-creator.

While Ireland has a long history of emigration, immigration has become just as relevant as a social issue since the Millennium. In times of globalism, when a unified face of humans is being promoted: white, English speaking, classless and educated – ‘cultural diversity’ within a society is the counter balance; something like an endangered species that needs to be protected and cherished. While culture just as the economy is being globalised, there is more and more focus on the local, the self-sufficient and the sustainable, the need for the unique voice, the different forms of expression. When the local and the global conflict, art can often provide the necessary dialogue within society.

The Belonging Project, funded by the Arts Council of Northern Ireland, Belfast City Council and professional photographer Laurence Gibson, combined audiovisual portrayals of migrants exhibited in public places with discussion workshops, while Northern Ireland was “the race-hate capital of Europe” (The Irish Times 27/6/2006).

While many organisations, like Terra Nova in Belfast or Counterpoint Arts in London focus on intercultural aspects of the arts, the Centre for Creative Practices are the pioneers of this movement in Ireland. Through their efforts, multiculturalism is less and less understood as segregated ethnic minorities celebrating their own culture, but rather, as an intercultural dialogue that has many layers and nuances showing new ways towards creating community and a resilient society in all.

Through its colonial history, Ireland has its own self-awareness of “otherness”; expressed in the need to save and cultivate the endangered national language. While the Irish language is still a contentious issue in Northern Ireland, Arts Council NI together with the Irish Writers Centre have been running the XBorders Projects through which they brought together emerging writers from both the Republic and Northern Ireland to explore and write about borders. Many of the selected writers were immigrants like myself.

Three series took place XBorders 2017, Accord 2018, and Transition 2019, during which the writers were exposed to ideas by art critics, artists and scientists in seminars in Derry, Dublin, and Belfast, all of which were open to the public. They were inspired to write about borders through fiction, poetry or non-fiction. The programme ran for three years, culminating in a publication of The Corridor, a new magazine, edited by the German-born writer Marcel Krueger and his wife the curator Anne Mager, who live in in Dundalk. The idea of responding to history and political decisions made by governments as well as exploring the metaphorical concept of borders and boundaries was another example of art as a “witness” of movements in society. 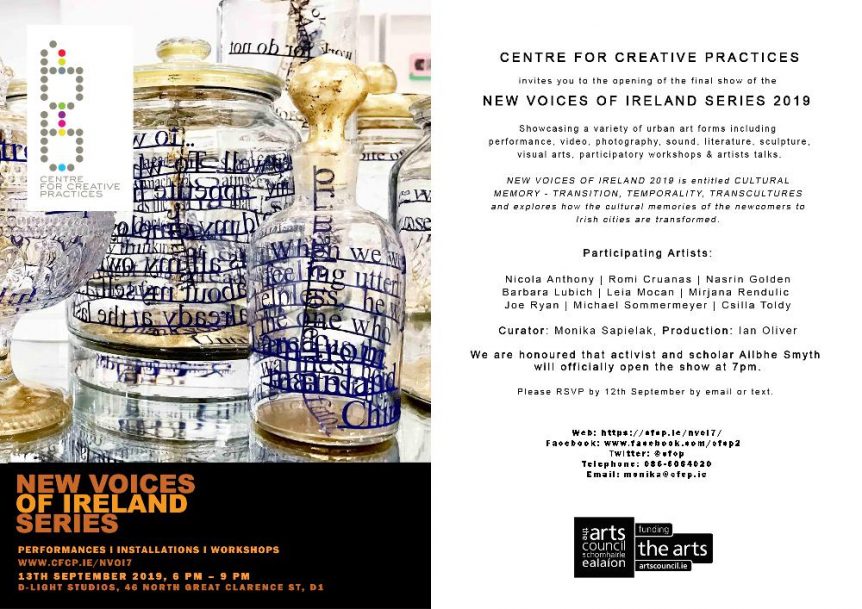 As society evolves, the meaning of “Irishness” is changing as well. Multiple national identities are often observed in second-generation immigrants, similar to the situation for many people living in Northern Ireland. The Irish constitution acknowledges them as Irish, hence the flood of Irish passport applications since the threat of Brexit. The Good Friday Agreement, signed by both the Republic and the UK, states that people living in the North can identify as British, Irish or both.

But what about me, or people like me? Am I Irish after having lived here for twenty-two years? What makes one Irish? When will a newcomer become Irish?

Assimilation is not prioritised as a policy goal in the Irish context, yet the first question a migrant hears when talking to locals is: “Where are you from?” “What brought you here?” It can take some twenty years to get over this initial question and this is all because of a foreign accent, but only if there are no other distinguishing marks on the person, such as different skin colour. Imagine the situation if you are black, but born and brought up in Ireland. You do not have an accent, but you will be asked the same question over and over again, nevertheless.

Race hate is on the rise in the Republic, too. (The Irish Times 11/10/2018) No wonder that so many of the participating artists in the New Voices Ireland Series 7 are concerned with identity.

Art is a witness and often a barometer for the underground, seismic or glossed over changes of society. “From modernism’s idea of a universal language that unites all, to contemporary global arts giving voice to under-represented communities, art has always strived to unite.” (Dimova, Gillen)

The study of the Bertelsmann Stiftung, where the quote above originates, states that contemporary art = global art. In this sense, all that you can see in this exhibition is not just unique for having its roots in a faraway places which are unlike Dublin, but also a component of local cultural identity. The human desire to establish communities without borders is prevalent in all. Art always springs from this conflict: striving to be unique and original in expression, while providing a unifying experience.

The award-winning Centre for Creative Practices, founded by Monika Sapielak and Ian Oliver took on the supporting role of migrant artists in Ireland, seeking to ensure that their contributions are recognised and welcomed within Irish arts, history, and culture. Over the years, hundreds of emerging artists have been supported in expressing their uniqueness and were encouraged to be able to see art as their business. The New Voices of Ireland series is in its seventh year now, for which we can only be grateful.

Csilla Toldy is a writer and lecturer of creative writing based in Rostrevor, Co. Down.