You are also known as a Community Musician?

Yes and proudly so.

I think my starting point comes from what happened to me when I was a child,  that I was told I couldn’t play the instrument I wanted to play.  Then my sister who is a great singer didn’t get into the school choir and then I actually got into the choir and I started to think it shouldn’t be like this; I felt it was unjust that some people get to play music and some don’t. I thought that shouldn’t be the way things should be.

I also thought that during the Grades system. I wondered how you could put a percentage on the playing of a piece. How could it be that something could be 25 per cent right.

And this stayed with you?

I started to think through ideas like that when I was in Bath, studying music. I would look at people who had a very high level of technique but who might not be very good in terms of working with other musicians. Other people weren’t necessarily very good technically but they were fantastic performers. So all of these ideas were circulating in my head and that led me in the direction of Community Music.

I start with the idea that everyone should have access to music. That is very important to me and so I always work with that in mind.

How did you put that into practice?

After I finished my studies in Bath I came back to Northern Ireland. I had completed a module in Bath on Community music. I did a placement in Bangor with people with learning and physical disabilities and that turned out to be my first official opportunity to facilitate a Music Workshop and I loved it.

I started to work on the idea that music can be more than just people working together with sound, that it has practical applications to promote health and well-being and it has community applications as well, that it can impact participants in community settings.

Did you study community music beyond the module in Bath?

When I was in Bangor I had a placement and I was trying out my ideas about music and how it could be used to communicate with people who had either never had or had lost the ability to communicate freely. I went to New York and I was a live-in care worker for a quadriplegic woman from Derry. It was an intense job, but I was able to explore New York, visit Harlem, listen to a lot of Music and begin to experiment with ideas.

I started to realise that I could work as a care worker and I could combine support and care work with my music, with creativity, and I could incorporate my music in that work. It also made everything a lot more fun as well. I studied these ideas, looked into the theory behind using community music and being part of creating the conditions for people to be able to make music and eventually that led me to look for a course that I would be able to take.

Did you find a course?

Eventually I ended up in Limerick at a Community Music course and that was fantastic. I loved that experience. I got an incredible amount out of that course which I started in 2012 – particularly from my lecturers, Jean Downey and Julie Tiernan and also studying the work of John Blacking. I also did a lot of busking in Limerick with my friend, fellow Community Music student and guitarist John Fitzpatrick. This was a great way to get to know the local Community and we often joked – Community Music in Action! I graduated in Community Music in 2013.

You returned to Belfast after that course?

It was difficult when I first moved back to Belfast, actually to where my parents now lived, in Donaghadee. That was where I met Jackie Flavelle, the legendary Northern Irish musician.

It was Jackie Flavelle who helped me adjust, because he had so much energy and enthusiasm for music and he transferred that enthusiasm to me. We had a residency as II V I in what was ‘Aether and Echo’, played gigs locally, weddings and events and festivals and had a lot of fun! Jackie shared lots of tales of being on the road with me which was very entertaining!

Did you learn a lot from Jackie Flavelle?

Jackie was one of the most inspiring people I have ever met. Musically, as a friend and a mentor for life. Soul mates of an unusual variety! His positive attitude and amazing laugh will stay with me forever!

Jackie also volunteered his time and talents at many of my Music workshops, including ‘Singing for the Brain’ at The Alzheimer’s Society. We made a CD with the group of their favourite songs and comments from the group, Jackie said, ‘I have been lucky enough in my life to play in some of the finest concert halls in the world with some of the finest musicians and nothing gives me more pleasure than to come along to Singing for the Brain and see the reactions of the people in the group. Some people who might not be able to hold a conversation anymore are smiling and singing and dancing and I have met some of the most beautiful people here – long may it continue!’

Being a Community Musician can be a challenge, I sometimes joke that I am a ‘Community Magician!’ You have to work very hard in all sorts of ways to make a living. As a freelancer you are always struggling to get enough work to survive, and get work which allows you to do what you have been trained to do. There is very little full-time work for community musicians and it can be exhausting.

You have managed to work continually though?

I got a job with Autism Initiatives and that allowed me to integrate my music into support work. At one point I took my saxophone into work and found that it was a great way to communicate with the women I was working with. One woman, with no vocal communication walked right over to me as I played my Saxophone and just held onto the bell! If this happened out at a gig, I would be worried as it could do damage to the instrument and me! But I could tell that it was safe, and we had a good level of trust between us. She just wanted to hold the bell and I think that was so that she could feel the vibration of the instrument. I learnt a lot in that job!

I worked for the Alzheimer’s society, running ‘Singing for the Brian’ and I have worked with Community Dialogue, The Simon Community, Stricklands Care Village, Brain Injury Matters and many more groups across Belfast and Northern Ireland. 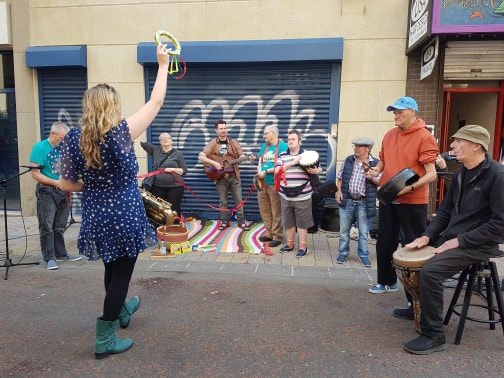 Would what you practice be considered art therapy or music therapy?

Yes, there is a therapeutic element to Community Music but primarily Community Music is about creating a safe, positive environment for people to express themselves through Music. And a Community Music workshop can happen anywhere with any number of people – there does not have to be a specific ‘problem’ or issue. Everyone is welcome.

I am Outreach Officer for Moon Base, a Black Box run project for and by people with Learning Disabilities.  The project I work on is a dedicated space for and by people with learning disabilities and the project supports and offers an environment where people can connect with music making. But also all other Art forms and socializing. We run Arts based activities Monday to Friday.

The group has recorded its first EP, ‘Moon Waves’ and we collaborates with John Fitzpatrick, who runs ‘The Coffeehouse Project’ in New Jersey – linking back to my friend and colleague from Limerick! Full Circle! 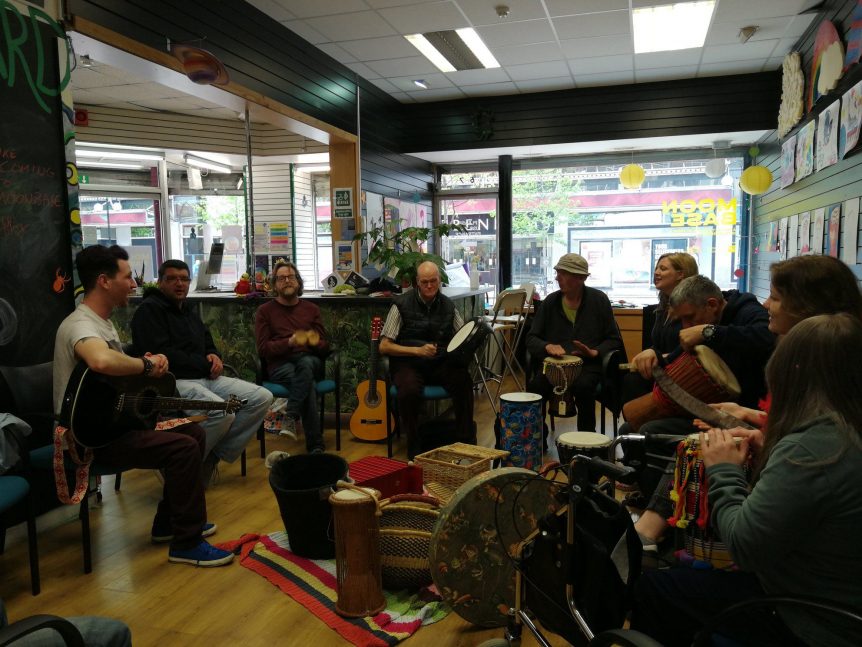 I feel at The Black Box I have finally found a ‘home’ for my work. I am given to freedom to try out ideas and learn from the group at Moon Base and challenge people’s perceptions of what people with learning disabilities can do (Here’s Me – memory music project)

So you are living in the best of both worlds at the moment?

Yes! I am playing music with lots of interesting groups and performers and I am putting into practice through my work what I have studied and trained to do. And most of all I am experimenting with sound, communication and the strong connections Music can make. 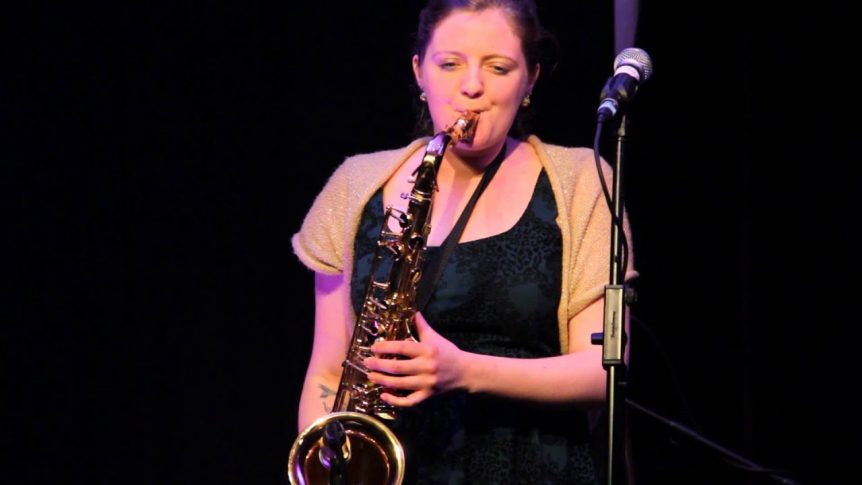