What drew you towards music initially?

I have a couple of memories that sort of come together. The first memory is of a primary school orchestra which always played at the back of the hall during assembly at my school, and because it was always there it was something to aspire to. We were encouraged at school to play musical instruments, chime bars and glockenspiels and things like that, and that led to being in the orchestra. That is how I got interested in playing an instrument.

I also listened to my parents’ music and in particular, I remember a record by The Moody Blues. The album “Days of Future Past” was a concept album; it tells the story of a particular day, and on that album the rock band is backed by an orchestra. That really made me take notice of the sound of an orchestra and that made a big difference to my thoughts about music and sound.

Did you start playing an instrument after that?

I was playing basic instruments at school, I played the recorder, the chime bars and the glockenspiel, and eventually I was looking around for a different instrument to play and my class teacher, who was also the music teacher, lent me her flute. She actually came around to my house and delivered the flute to me, which was incredibly supportive. The flute became my main instrument, I was about 8 years old and my parents paid for music lessons.

Yes and I don’t think I really appreciated everything my family did for me until I was much older. I had lessons which cost money, I needed new instruments from time to time, they took me to and from my music groups. Considering I was the only musician in the family, they gave me incredible support.

Did you go on with music at school and college?

I did music all the way through school, I did my Grade 8 exams before my GCSE’s. I did music at A level and at University at well. I was very lucky that I went to University when local authorities paid your tuition fees, because otherwise my family probably could not have afforded to send me.

Did you play with any groups or orchestras?

I think it is interesting to mention here that when I was learning to play the flute, I learnt to play classical music, but many of the flute players I was seeing were with rock bands, groups like Jethro Tull, groups that my dad listened to.

I would also see on television orchestras backing pop stars, so it didn’t seem out of place to mix the two genres. I did go on to play with various groups and orchestras and beyond the flute I have added more instruments to my collection.

You do play other instruments?

I didn’t learn other instruments till much later, when I was in my thirties. I was in an amateur wind band, and they decided to set up a saxophone group. They asked me to come along and be part of the group, but I didn’t play saxophone.  Someone gave me their spare saxophone and I found myself in the group! I picked it up pretty quickly because there were similar elements to the flute. I also ended up playing orchestral percussion; I was in another group and they needed someone to play bass drum and from there I taught myself percussion.

Do you still play regularly?

Yes I play with two orchestras and a concert band. I conduct a flute choir and I am in a wind quartet as well. I also teach woodwind (flute, clarinet and saxophone) and have about 20 pupils. 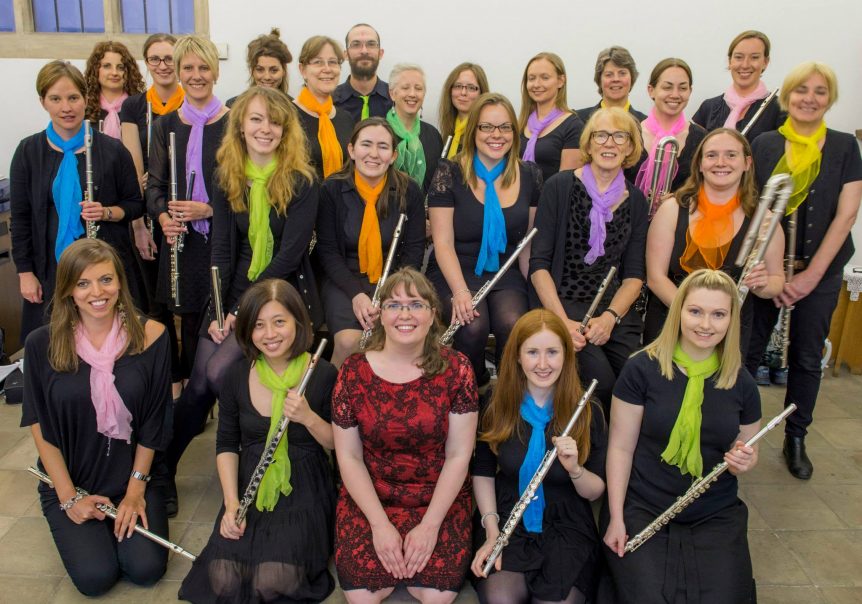